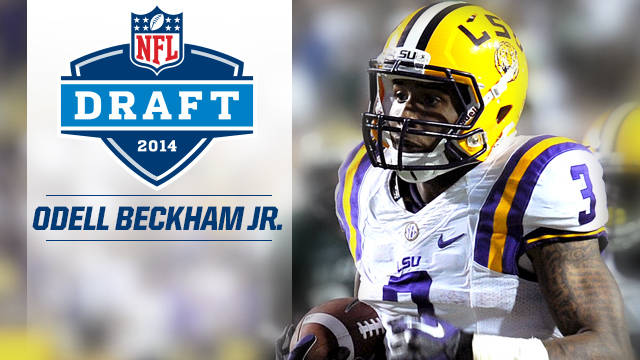 BATON ROUGE — Odell Beckham Jr. became the highest drafted LSU wide receiver in history on Thursday night, as the junior from New Orleans was selected 12th overall by the New York Giants in the 2014 NFL Draft.

Beckham Jr. is the 13th first-round selection since Les Miles took over the LSU program in January of 2005. Including Beckham Jr., LSU leads the Southeastern Conference with 52 players picked in the past nine drafts — ranking No. 2 nationally in the time span behind Southern Cal.

Beckham Jr. surpassed Michael Clayton as the highest drafted receiver in school history, as Clayton was the 15th overall pick by Tampa Bay in 2004.

Bechham Jr. received the 2013 Paul Hornung Award as the nation’s most versatile player. He earned first-team All-America honors as a junior in 2013 as both a kick returner (Football Writers Association of America) and return specialist (CBSSports.com) after leading the SEC and ranking No. 2 in the nation in all-purpose yards with a 178.1 average. 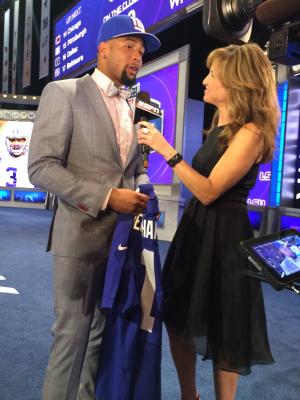 As many as a dozen Tigers have the opportunity to be drafted over the next three days (LSU Pro Day Scorecard).

The first round of the three-day NFL Draft concluded Thursday evening, and will be followed by rounds two and three on Friday starting at 6 p.m. CT. Rounds four through seven will be held on Saturday starting at 11 a.m.

ESPN and the NFL Network will televise all seven rounds.

Check back on LSUsports.net on Friday at 6 p.m. CT for updates as Tigers are selected in the second and third rounds.

Here’s Odell Beckham @OBJ_3 getting the call from the @Giants in the Green Room tonight. @LSUfball pic.twitter.com/vPoZCiRwaW

The Giants have drafted LSU WR Odell Beckham Jr.! Here are five things you need to know about him: http://t.co/Mp6PyKYLs5