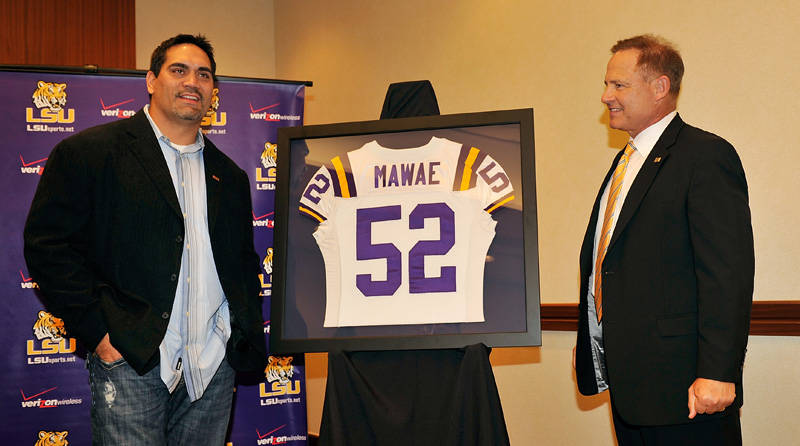 The seeds of self-confidence Kevin Mawae says he needed to become one of the top NFL centers of modern times were planted by Kenny Ferro.

Ferro, a 65-year-old New Orleans native who now is a special education teacher in Kilgore, Texas, coached for more than 30 years in high schools in Louisiana and Texas and at the college level at Nicholls State, LSU and Tulane. He was Mawae’s offensive line coach in his first two years at LSU.

“He’s the first kind of coach I’d ever had who told me, ‘You have what it takes to make it to the big time,’” says Mawae (pronounced Ma-WHY). “He was willing to tell me that before anybody else ever did.”

Ferro plays down that he noticed such potential in Mawae.

“I think Ray Charles could’ve picked that out,” he cracks. “I can’t tell you how special he was. He had such great footwork and great fluidity. And he had a grit about him, and an attitude that it was too important for him not be the reason a play wasn’t successful.”

A military brat who went to LSU after an eye-catching prep career at Leesville High School, Mawae said the confidence that Ferro instilled in him was crucial in his molding his football career at LSU and for three different teams over 16 years in the NFL. It’s a career that has been validated by numerous awards and honors, the latest of which is his pending induction into the Louisiana Sports Hall of Fame on Saturday, June 29 at a sold-out ceremony in Natchitoches.

“As I look back over my timeline, the first word that comes to mind about my being selected for the Louisiana Sports Hall of Fame is ‘wow,’” says Mawae, whose family is of Hawaaian descent. “It’s something I didn’t ever strive to achieve. … Part of my love for the game is I wanted to be the best I could be, and whatever happens, happens. It’s pretty special what I’ve been able to achieve because of that. It’s humbling and a great privilege.”

Born January 23, 1971 in Savannah, Ga., where his father, Sgt. 1st Class David Mawae, was stationed at Hunter Army Airfield, Mawae spent his early years at military towns in Kansas and Germany before moving to Fort Polk and becoming an all-state (and all-academic) football player for the Leesville High Wampus Cats.

An early commitment to LSU, Mawae wanted to play for LSU after being present as a recruit for the famed LSU-Auburn “Earthquake Game” in 1988. He signed to play for head coach Mike Archer but then had to endure what he calls the “Dark Ages” of LSU football under Curley Hallman.

Chad Loupe, the LSU quarterback during those times, remembers being shocked when he first met Mawae as a fellow freshman.

“He was 6-foot-4, maybe 250 and had hair down to the top of his butt,” says Loupe. “I thought he was a wild looking, Samoan linebacker type. Turns out he was one of our linemen. I got to know him, and he was – and still is – just a phenomenal individual. ”

Mawae, under Ferro’s tutelage, began his career at LSU as an offensive left tackle and finished it as a center, where he would play and thrive for most of his 16 years in the NFL.

Loupe says Mawae had a key role in a singular highlight from LSU’s “Dark Ages” – the Tigers’ 17-13 upset of No. 5 Alabama in 1993 at Bryant-Denny Stadium in Tuscaloosa, Ala., ending the Crimson Tide’s 31-game winning streak.

“The day before the game, we had a walk-though at the stadium, and afterwards Kevin called the team together, and there were some dark clouds above us and he said, ‘Look, guys, I have a funny feeling we’re going to do something big tomorrow. I think we can win it. I know we’ve had a rough go, but if we play like we’re capable, we can do it.’

“I think that fired us up, rallied us, got us to thinking we can do something good,” Loupe went on, “and sure enough, we beat them. I’m sure every guy who was there remembers him firing us up.”

A third-team All-American at LSU, Mawae’s dream since age 8 was to play in the NFL, and that dream came true when he was chosen in the second round of the NFL draft by the Seattle Seahawks in 1994, making him LSU’s highest selected offensive lineman since Bo Strange (second round, Philadelphia) in 1961. He started his NFL career at right guard but moved to center at the start of the 1996 season and he played there the rest of his career.

Recognized three times as a first-team All-Pro by the Associated Press, Mawae was an 8-time Pro Bowl selection and was named to the NFL 2000s All-Decade Team as well as a member of the New York Jets All-Time Four-Decade Team.

As a testament to his durability, he played in 177 straight NFL games that ended in October of 2005 with a serious triceps injury to his left arm. He missed the rest of the season and the following March was cut by the Jets and signed with the Tennessee Titans nine days later.

When he signed as a free agent with the Jets in March of ‘98, and his agent told him and his wife on separate phone lines, “Congratulations, you’re now the highest paid center ever!” Mawae couldn’t contain his emotions.

“I started crying,” he says. “My agent said, ‘Are you there? Are you there?’ Tracy was listening on another phone and she told him I couldn’t talk because I was crying.

“I mean, I had five long seasons at LSU and four mediocre seasons at Seattle, and you begin to wonder if people are recognizing you for what you think you’re worth, and then Bill Parcells makes me the highest paid center in the league.”

Mawae lived up to his five-year, $16.8 million deal (including a $5 million signing bonus) during his time with the Jets.

He helped a future Pro Football Hall of Famer, Curtis Martin, rush for a franchise-record eight 100-yard rushing games en route to a 1,287-yard season in 1998, when the Jets averaged 357.2 yards per game and controlled the ball an average 32:17 minutes per game.

“Kevin is definitely one of the top two players who had the most impact on my career,” says Martin. “With his leadership and versatility as a center, it kind of changed the way we were able to play the game. It made me so much better for my running style.

“I don’t know of anyone who ever played better at his position,” Martin says. “Quite frankly, he played a large part in my being elected to the Hall of Fame. For that, I am indebted to him.”

Mawae and quarterback Vinny Testaverde both joined the Jets at the same time, and developed a rapport on and off the field.

“He was a hard worker on the football field, was dedicated to his teammates, committed to winning and a great family guy,” says Testaverde. “The things he believed in we were things I believed in. I wish I could’ve played longer with Kevin or guys like Kevin because he makes you better as a player and person.”

Mawae, who lives in Baton Rouge with his wife and two children, Kirkland, 16, and Abigail, 13, helps financially support the Children’s Cup International Relief missions organization and does a lot of public speaking. He often tells how he became a better person after the death of his brother, John, in a car accident early in his pro career.

It was a transforming event in his life that he says help “get me on the right course” and helped him realize “there was more to life than making money and being rich and famous.”

He said from that point he committed himself to living for God, and he even attributes his late career leadership as president of the NFL Players Association to the seminal moment when he was “saved” on June 24, 1997.

“I get to do this,” he said he tells people as a way to lead them into striving to live a godly life, “because my brother passed away.”