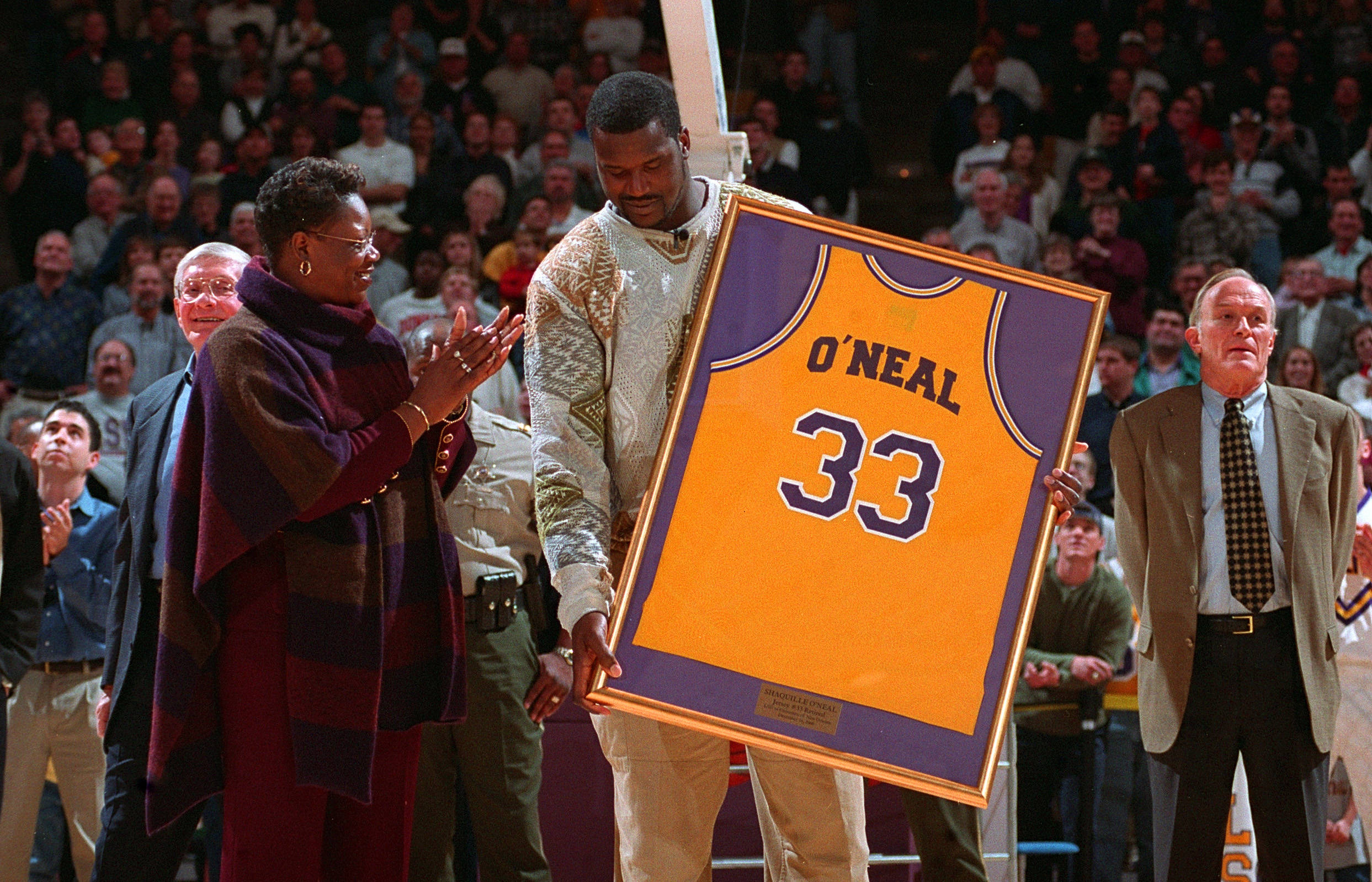 Shaq’s love for Louisiana shines through

Where do you start when trying to put your arms around the very large life and career of Shaquille O’Neal?

No one really has the arms that are big enough, literally and figuratively.

Let’s see, there is national college Player of the Year. No. 1 pick in the NBA Draft. Multi-time NBA Champion and multi-time regular season and postseason MVP. Olympic Gold Medalist. Member of NBA at 50. One of the all-time greats to ever play the game!

Then there is everything else – recording artist, business owner, movie star, college graduate, a “big” man with a doctorate, NBA studio analyst, a man with a statue on the campus he graduated from and so much more.

Now add one more to the list and that’s induction into the Louisiana Sports Hall of Fame in the Class of 2013 that will open the Hall of Fame’s long-awaited building at 800 Front Street in Natchitoches. O’Neal is part of a basketball-heavy class, one that includes fellow LSU icons Tommy Hodson and Kevin Mawae, both football greats. They will be enshrined during a sold-out ceremony Saturday, June 29 in Natchitoches.

“It an honor to be elected to the Louisiana Sports Hall of Fame and join so many great athletes and coaches, including my head coach at LSU, Dale Brown.  My career has taken my all over the country, and the world, but Louisiana has always been special for me. I love Louisiana,” said the man known by so many nicknames including The Big Aristotle, Shaq-Fu and now of course, Dr. O’Neal.

While O’Neal has been on the stage both nationally and internationally for years and it has been 21 years since his last dunk at the Pete Maravich Assembly Center, it is those three years at LSU that defines why he is so treasured in Louisiana. It’s a feeling that goes both ways and that’s why he was an easy first-year inductee in one of the most special years ever for the Louisiana Sports Hall of Fame.

O’Neal has made the most of his dreams and those dreams have taken him so many places.

“We all have the same goals and aspirations,” O’Neal said. “We all get here some type of way, whether it’s a scholarship or our parents pay for college. The great thing about Baton Rouge is that the people here are so friendly. The campus is so lively and the night life is so great.  Everyone is just together. Baton Rouge is one of the best cities in the world. I had people who were like my extended family … Besides my parents who raised me well, it is the people of Louisiana who really made me.”

O’Neal was a big fish when he came to LSU. But the spotlight was white hot at LSU and people made him quickly feel at home. It didn’t take long once Shaq’s parents moved him from San Antonio to Baton Rouge.

“I had the best time of my life from 1989-92 right here in Baton Rouge,” O’Neal said seriously. But in true Shaq fashion he also enjoyed the treatment.

“I went to a small (high) school and I was a local superstar. But when I got (to Baton Rouge), everyone knew who I was.  People just treated me with so much honor and so much respect. That’s why I come back every year. It’s not just to show up and show off.  I miss Baton Rouge,” he said earnestly.

“That’s why I jump on the highway from Orlando in my RV and we drive 14 hours to come to Baton Rouge every first football weekend. It’s beautiful.  LSU will remain one of the top universities in athletics. If any of the parents want their kids to attend a nice clean college, LSU is where to come, baby.”

“A lot of people don’t know this,” the big center said, “But when I had to call Coach Brown and tell him I didn’t think I wanted to come back (after his junior season), that was one of the hardest days of my life because if I leave Coach Brown there will be no more Tiger Town, no more Sports on Thursday, no more football games, no more tailgating, no more crawfish. There would be no more fun. Now I’ve got to go to work.  I really got to take this accounting class I fooled around in and go to work. That was a very, very difficult phone call. That was a very difficult decision.

“I don’t really believe in the ‘ifs’ but I’m watching TV one day and I hear Dick Vitale say that if this guy (Shaq) decides to come out he’ll probably make about $50 million and a couple of minutes later he says that if I hurt my knee, I’ll probably only get a million dollars from insurance. So I’m sitting there 50 million here, a million over here. I think I’m going to go ahead and go. It was tough because I loved being at LSU.”

But in leaving for millions he promised his mother that there would eventually be a diploma from LSU that would say Shaquille O’Neal on it. That came seven years later in one of the most famous graduation ceremonies in school history when O’Neal was the commencement speaker and as then Chancellor Mark Emmert said in his introduction, O’Neal “raised the median average income of the 2000 graduation class.”

O’Neal would for the first time proclaim what has become a common note when he is speaking to large crowds, declaring LSU “Love Shaq University” and “Can You Dig It?”

But there was more to the graduation on that weekend for O’Neal.

“The great Joe Dean always told me that when I came back to graduate that he would retire my jersey. Joe, thank you very much. You have always been a man of your word and I appreciate you. I appreciate your honestly and I respect that,” O’Neal said about the man who made the decision.

“I kind of didn’t really believe it when he said it, but at graduation he put my hand on my shoulder and said ‘Shaq!’  I went ‘Mr. Dean how are you?’ He said, ‘I told you I’m going to retire your jersey and we are going to do it tomorrow night.’ I saw my jersey in the rafters and that right there, humbled me because there are a lot of players that could be in the rafters. I’m proud to be a part of that.”

So many games and so many memories.

“My favorite memory is coming out of the tunnel and hearing those horns. Looking up and seeing the whole city behind us win or lose. The only thing I regret is not being able to give LSU a national championship because Baton Rouge has given me so much.”

When you ask fans about favorite games O’Neal played in, one they always mention is a 148-141 overtime win over Loyola Marymount when LSU’s Brown elected to play the same style as LMU’s Coach Paul Westhead.

“They had Bo Kimble and the great Hank Gathers. Rest in peace Hank,” O’Neal recalled. “Coach Brown came to me and said, ‘Big fella, can you play?’  I said,  ‘I like running, you make us run every day in practice.’ Coach said, ‘This guy you are playing against is a pro player but he’s still in college. This guy won’t quit.’ So I’m like who is it? I’m looking at Hank Gathers and he’s 6-7 and I’m going to be all right. I kind of had my way with him but he’s the only player that kept coming back. I think I blocked his shot like 10 or 12 times, he kept coming back. I think he ended up with 40-something points. Bo Kimble shot the lights out. Even though it was a tiring game, it was a fun game. But after I hit the shower, I went home and I think I slept for about two days.”

Now as Dr. O’Neal, his playing days are over and while much of his public time around hoops is spent as an NBA analyst in the TNT studios, he can think back to his days in Baton Rouge when he planned the post-basketball part of his future life.

“Baton Rouge was a peaceful town and in my off time I was a thinker,” he said. “My father, Coach Brown and all the people (at LSU) told me to think out of the box. Even though I was drafted, I was smart enough to go to class and get this business degree in case things didn’t work out. So I was always thinking. I’m playing, but I’m setting up stuff. I own businesses, so I had enough things to step back to when basketball was over.”

And with all that he has to do, there’s always time for visits to Louisiana, especially Baton Rouge, and on the last weekend in June, to be part of the induction class in Natchitoches for the Louisiana Sports Hall of Fame.