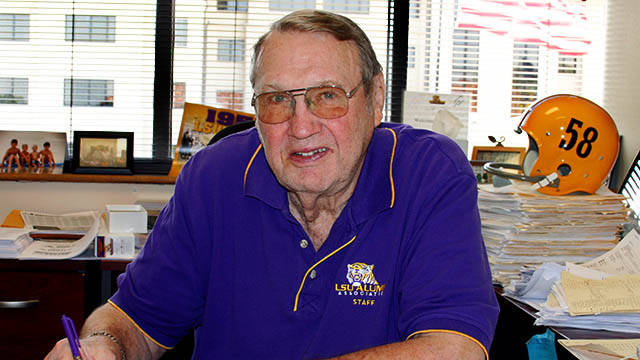 A native of Little Rock, Ark., Jones was most recently inducted in the LSU Alumni Hall of Distinction on April 12.

Jones played football for LSU from 1953-54 as a center and linebacker. He earned bachelor’s and master’s degrees in education from LSU in 1956 and 1961, respectively. He was commissioned through LSU Air Force ROTC, served his country three years on active duty, and was discharged at the rank of captain. In 1957, while stationed at Shaw Air Force Base, S.C., he was named to the All-Air Force football team.

Jones was head coach at Florida State University for three years and led the Seminoles to the Fiesta Bowl in 1971, his first season. He returned to LSU in 1979 as associate athletics director. In 1989, after serving on two occasions as LSU’s interim athletics director, Jones turned the page on a successful run as a football coach and sports administrator and began his career as a fundraiser for the LSU Alumni Association.

Jones, as chief fundraiser for the LSU Alumni Association, raised more than $35 million dollars in contributions for LSU scholarships, professorships, and facilities over the course of 23 years.  His fundraising accomplishments are evident in the construction of the Lod Cook Alumni Center, The Cook Hotel and Conference Center, the Jack and Priscilla Andonie Museum, LSU War Memorial, Tiger Walk, and Tiger Plaza. Open heart surgery in 2003 did not slow him down, and even while dealing with current serious health issues, Jones’ first concern was taking care of “his donors.”

Jones was honored in 1983 as National L Club Man of the Year and in the mid-eighties received the LSU Foundation’s Fundraiser Emeritus Award. In 2011, Jones was recognized by the Association as Most Valuable Player at the Accolades Banquet and a scholarship in his name was established.

Jones and his first wife, the late Judy Bianchi, adopted three children, David Bruce, Kevin, and Laura. He married Velma Arledge Thornton in 1989 and was stepfather to Dale Thornton and Allison Thornton. He is also survived by 13 grandchildren and two great grandchildren.

Visitation will be Sunday from 5 p.m. to 8 p.m. at Rabenhorst Funeral Home East at 11000 Florida Boulevard, and Monday from 11 a.m. to 1 p.m. at Broadmoor Presbyterian Church at 9340 Florida Boulevard, with funeral service to follow at 1 p.m.  Burial will take place at Greenoaks Cemetary.