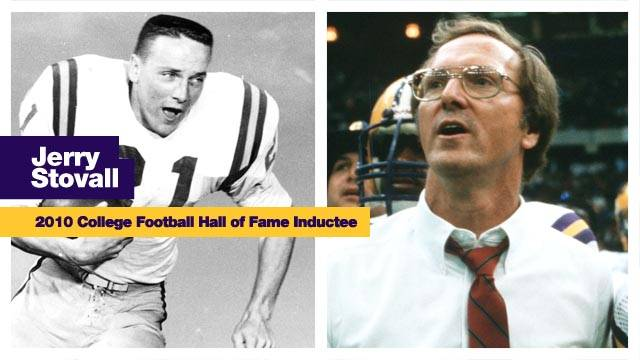 BATON ROUGE – Former LSU standout Jerry Stovall is one of 12 players and two coaches who have been named to the National Football Foundation’s 2010 College Football Hall of Fame Football Bowl Subdivision Class, the organization announced on Thursday.

“This is a tremendous honor,” Stovall said. “It’s very humbling to be associated with such an impressive group of men who are in the College Football Hall of Fame. I’m sure I won’t feel the full impact of this honor until I’m on stage at the dinner in New York or the enshrinement next summer.

“This is one of those honors that you really don’t think about while you are growing up and playing the game, but now 30 or 40 years later, you look and see the list of names who are in the Hall of Fame and it makes you realize just how fortunate you are to be included with that group.”

“This is a great and important recognition for one of the legendary figures in LSU athletics history,” LSU Vice Chancellor and Director of Athletics Joe Alleva said. “This honor is long overdue for someone who had such a tremendous impact on the game of football. Jerry played an important role in our football history and LSU congratulates him on this well-deserved honor.”

A unanimous All-America selection in 1962, Jerry Stovall was a literal “Mr. Everything” for LSU, playing halfback, defensive back, kick returner while and also handling punting duties during his three years in Baton Rouge.

A two-time All-SEC First Team selection, Stovall was named the conference’s Most Valuable Player in 1962 en route to finishing as the Heisman Trophy runner-up behind Oregon State’s Terry Baker. A member of the 1961 SEC Championship team, he finished at LSU with 1,081 yards and 13 touchdowns on the ground, adding 452 yards and one touchdown receiving. He also held the LSU record for highest punting average (42.1) in a season, amassing 165 attempts for 6,477 yards by career’s end.  Stovall gained nearly 700 return yards on special teams and recorded seven interceptions as a defensive standout.

Selected in the first round of the1963 NFL Draft by the St. Louis Cardinals, Stovall played nine years in the NFL and was twice named to the All-Pro team.  He was also selected to three Pro Bowls.

Stovall later entered coaching and returned to LSU as head coach from 1980-83.  In 1982, he was named the Walter Camp Football Foundation Coach of the Year after leading the Tigers to an 8-3-1 record and an Orange Bowl appearance.

“This is a tremendous honor for Jerry and we are very excited for him and his family,” LSU coach Les Miles said. “He played such an important role in LSU’s football history, first as a player then as a coach. Jerry represents what’s great about LSU football and this University and having him named to the College Football Hall of Fame is another proud moment for LSU.”

He and his wife Judy have two children, and they reside in Baton Rouge, La.

“We are incredibly proud to honor this year’s class of Hall of Famers for their leadership, athleticism and success on the college gridiron,” said Archie Manning, a 1989 College Football Hall of Famer from Ole Miss. “They are all well-deserving of this recognition, and we look forward to celebrating with them and their families in New York. The NFF Honors Court and its chairman Gene Corrigan did an excellent job in selecting this outstanding group.”

Excluding the 2010 FBS class, only 870 players and 188 coaches have been inducted into the College Football Hall of Fame from the more than 4.72 million who have played the game over the past 141 years.

The 2010 College Football Hall of Fame Football Bowl Subdivision (FBS) Class will be inducted at the NFF Annual Awards Dinner on December 7, 2010, at the Waldorf=Astoria in New York City.  They will be officially enshrined in 2011.