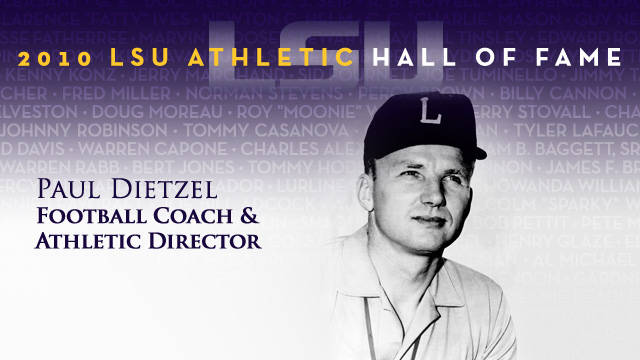 Excellence – It’s something every person strives for, and Paul Dietzel came nothing short of living it.

Dietzel began his football career as a player for Duke, but after one year, he served in the U.S. Army Air Forces during World War II. After his service in the military, Dietzel competed for Miami of Ohio where he earned All-America honors as a center.

After graduating from Miami, Dietzel learned the game from legendary coaches like Sid Gilman at Cincinnati and Bear Bryant at Kentucky. However, it was from Col. Red Blaik of Army that he learned motivation and discipline. While perfecting his trade at Army, an invitation for an interview came from Baton Rouge. The LSU Tigers had not won more than two Southeastern Conference games in three-straight seasons.

“I was an assistant coach at West Point when the LSU job became available,” said Dietzel. “LSU invited me down to be interviewed, and I came down not knowing much about LSU at that time.”

Dietzel traveled down south to interview for the head coach position and saw the program’s potential. In 1955 at age 29, he moved his family to Baton Rouge and became the nation’s youngest head football coach.

When Dietzel arrived in Louisiana that spring, he was determined to make his family good citizens of Louisiana. He immediately began his speaking tour throughout the Pelican State to ensure that the people of his new home knew that he would not rest until the LSU program was back on its feet.

Dietzel struggled through his first few seasons in Baton Rouge but was determined to right the ship.

It was in 1958 that Dietzel created a precedence of excellence at LSU. Working side-by-side with his staff, Dietzel and established the “White Team”, “Go Team” and the “Chinese Bandits”, which became a famous piece in LSU football history.

In Dietzel’s fourth season at LSU, the unique system led the Tigers to an undefeated season and LSU’s first National Championship in 1958.  Coach Dietzel also won National Coach of the Year honors for his phenomenal efforts.

E.R. “Bo” Campbell, Tiger Athletic Foundation past President and former football player, was a freshman in 1959 and remembers Dietzel as an outstanding coach with an unforgettable presence about him.

“He was a very good coach and a stern disciplinarian, believe it or not,” said Campbell.”At that age, I was scared to death of him. He was tall and nice looking guy. He had a presence about him.

“Most of the guys were like me and were intimidated or uncomfortable around him because he was an imposing figure, but it was in a good way.”

Campbell’s freshman year wasn’t quite as storybook-like as the year before, but it was the season of Billy Cannon’s unbelievable 89-yard punt return to beat the Ole Miss Rebels in the final seconds of the game. That same season, Cannon became LSU’s only Heisman Trophy winner.

In 1961, Dietzel parted ways with the Bayou Bengals to return to West Point to bring another program back to life.

Although it was a tough decision to leave Baton Rouge, Dietzel was excited to go back to a place where he had once molded his coaching skills.

“I had been an assistant at West Point, and I had roots in that place,” said Dietzel. “It’s a gorgeous place, and my wife and I had raised our children there.”

After leaving LSU, Dietzel coached at Army for four seasons and then South Carolina for nine, but LSU remained his biggest success.

When his coaching days were over, Dietzel found himself in athletics administration. He served as the athletics director at South Carolina and commissioner of the Ohio Valley Conference for one year before joining Indiana University as AD in 1976.

“My wife didn’t care too much for the winters in Indiana, and we lived there for the blizzard of 1976,” Dietzel said. “When LSU asked me to come down to be interviewed for the job, I think my wife became anxious to come back to Baton Rouge to see her friends and live in the warm weather again. Our son and his family lived in Baton Rouge, too, so that made it an easy decision.”

As athletic director, Dietzel continued his reputation of excellence.

Dr. Sam Nader, now the Assistant Athletic Director of Football Operations, was the recruiting coordinator for the football team 29 years ago when Dietzel returned to LSU.

“Coach Dietzel always had an impression of a very positive person,” said Nader.”He was a guy who was infectious in terms of his attitude. He set an example of being a guy that carried himself like we were the best. He wanted us all to feel that being at LSU was being part of something special.”

Although football was his passion, as athletics director Dietzel sought excellence from beyond the gridiron.

On April 24, Coach Dietzel will be inducted into the LSU Hall of Fame and will forever be remembered as someone who set the standard for excellence at LSU.

“I don’t think you can really talk about LSU sports without Paul Dietzel coming up as a guy who was a pace-setter in football and in the overall sports program here,” said Nader proudly.