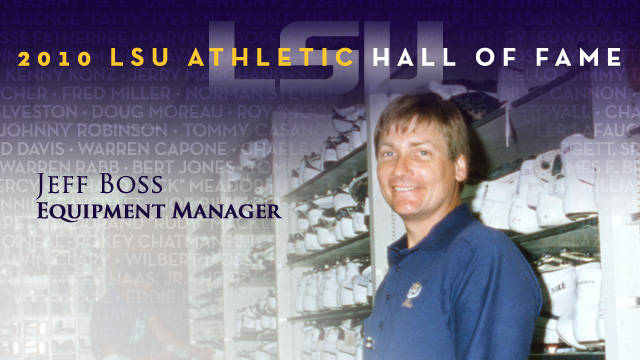 There are many words one could use to describe 2010 LSU Athletics Hall of Fame inductee Jeff Boss, the Tigers’ longtime equipment manager who passed away in 2003 after a lengthy battle with brain cancer.

But those who had the pleasure to learn the trade under him would say one word stands out from the rest — mentor.

In 24 years as the equipment manager for the LSU football team as well as the athletic department, Boss made a positive impact on numerous players who came through the program and touched the lives of dozens of student managers, many of whom went on to make it their profession.

Today, no less than 14 former student managers continue to carry on his legacy as full-time equipment managers or football operations directors at different universities across the country.

“Coach Boss was a mentor and a father figure to everybody who came through this building, not only just the equipment managers but also players,” said current LSU Equipment Manager Greg Stringfellow, who served under Boss as a student and professional for 12 years.

“I think he taught a lot of people in this department how to treat other people, and I think that is one of the greatest things that we all learned from him.”

Boss, a graduate of McNeese State University, took the position at LSU in 1980 after spending several years working at the high school and junior high levels as a teacher, football coach and athletic director.

Throughout his time as LSU’s Equipment Manager, Boss was not only considered a valuable mentor to managers and players but also revered in the profession for his dedication to his craft and his ingenuity.

The 1990 winner of the Glenn Sharp Award, which goes annually to the Equipment Manager of the Year as chosen by his peers, Boss was also well-known for his design and development of the “Boss Shark,” a football shoe marketed nationally for intercollegiate play by Nike.

“When Coach Boss helped Nike design the Boss Shark, he took components of a few different shoes and made another shoe out of it,” Stringfellow said. “What he did by doing that is kind of revolutionize the whole shoe industry as far as cleats go.

“That shoe is no longer in use today, but there are components of that shoe that go into every shoe made now. Most football cleats now have an air midsole in them to make them feel like a tennis shoe at times, and those are things that he added.”

Boss was diagnosed with a brain tumor following the Tigers’ return from the Cotton Bowl in January 2003 and missed his first LSU game in 24 years when the Tigers faced Louisiana-Monroe in the 2003 season-opener. Then-LSU head coach Nick Saban visited Boss along with several players two weeks later and presented him with a game ball from that contest.

The Tigers also dedicated that season to him and wore the letters “JB” on the back of their helmets for the rest of the season.

In September 2003, LSU paid tribute to their longtime equipment manager with a ceremony naming the game day locker room in Tiger Stadium in his honor. Dozens of former players and managers returned to campus to recognize the man who meant so much to them.

Boss passed away the following month on Oct. 27.

“Jeff Boss was the best at what he did,” Saban said following his death. “He was without a doubt one of the absolute best people you’d ever meet. You don’t have many chances to meet someone who was as selfless as Jeff. He was always thinking of others and putting their feelings first. That quality above all others is something special that I wish everyone had, and I know it would make the world a much better place because it certainly made LSU a better place.”

Seven years after his passing, LSU will honor him once again as Boss will be formally inducted into the LSU Athletic Hall of Fame posthumously on Saturday, April 24 in the Pete Maravich Assembly Center.