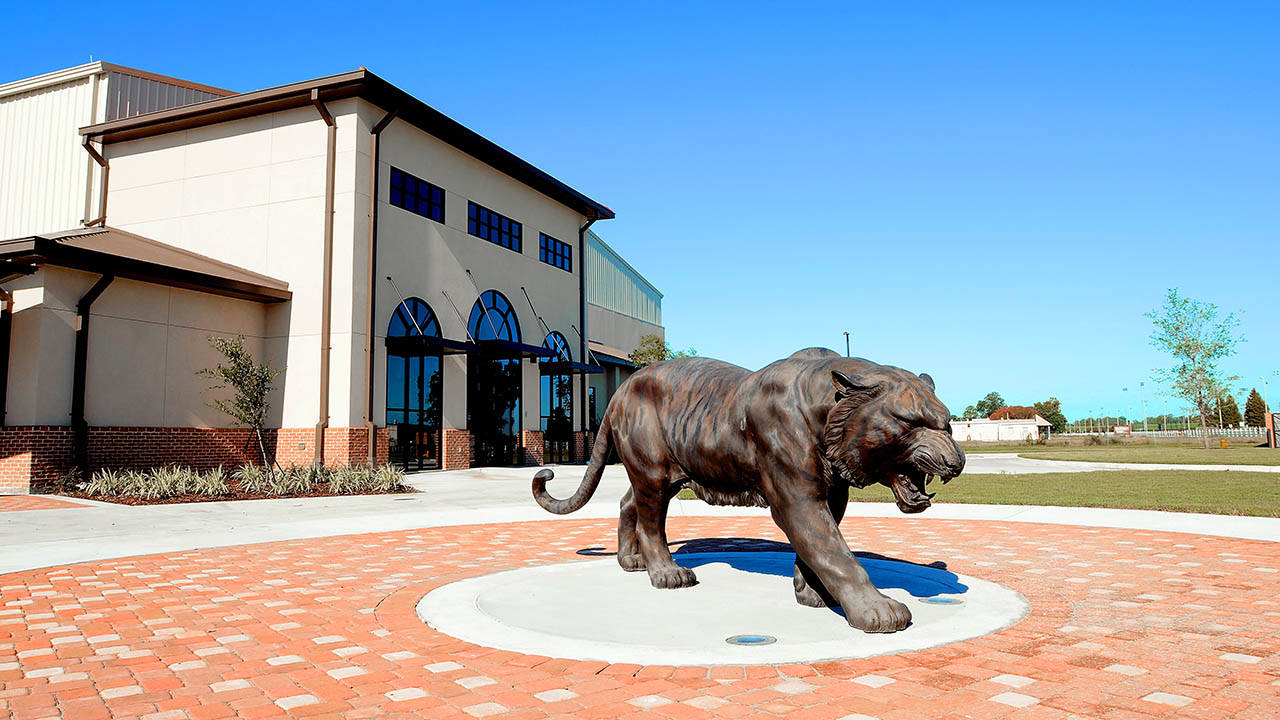 In August 2015, the tennis programs opened the state-of-the-art LSU Tennis Complex. With more than 160,000 square feet of space, the facility features championship-caliber courts with 12 outdoors and six indoors. Housed inside the indoor facility are players’ lounges, locker rooms, cardio room, satellite training room and coaches’ offices for both the men’s and women’s teams.

Dual matches will take place on the north side of the facility at the W.T. ‘Dub’ Robinson Championship courts. The six remaining outdoor courts are located on the south side and allow the facility to host two matches at one time.

Fans may enjoy all the action with excellent sight lines from a total of 1,400 seats facing the 12 outdoor courts. The six indoor courts allow the Tigers to host different tournaments in front of more than 300 fans above the playing surface. The new facility also guarantees that both teams will never miss a practice or match due to unfavorable weather conditions.

Point-by-point scoring is available through Daktronics scoreboards on all 18 courts within the facility for an enhanced fan experience. Each set of courts also features a larger scoreboard with scores from all six courts. Fans off-site can track live matches online through StatBroadcast (www.LSUstats.com), which is directly linked to each judge’s controller.

Spectators will also benefit from a permanent concession stand located on the west side of the facility between the two sets of outdoor courts. Members of the media will be able to provide coverage in the press box facing the W.T. ‘Dub’ Robinson Championship courts.

The LSU tennis programs are already reaping the benefits of the opening of the new facility. The men’s team hosted a fall invitational in 2015, while the women played host to the SEC Tournament in April 2016 and the Tiger Fall Classic in November 2016.

Since 1970, the W.T. Robinson Tennis Stadium has been the home of the LSU tennis program. The “Dub”, as it is affectionately referred to, has also undergone numerous renovations and improvements to keep up with collegiate tennis facilities across the nation.

The “Dub” was totally refurbished after the 2002 season to include an equipment room and a ground-floor viewing area for handicapped tennis fans, as well as improved locker rooms and showers.

Robinson Stadium, named in honor of LSU’s former tennis coach, was completed in 1970 and is the site of the Tigers’ and Lady Tigers’ home outdoor matches. It features six varsity courts and six practice courts. Both the varsity and practice courts were resurfaced prior to the 2012 season, and new lights were added to the varsity courts after the 2007 season. The varsity courts feature an electronic scoreboard, along with six individual electronic scoreboards for each court that were added before the start of the 2009 season. The stadium can accommodate up to 550 spectators.

The Lady Tigers’ best season at the “Dub” came in 2000, where the Lady Tigers remained perfect at home throughout the season for only the third time in the stadium’s history. They advanced all the way to the NCAA Tournament Sweet 16 that year as well.

LSU’s legendary men’s tennis coach W.T. Robinson, or “Dub” as he was lovingly known, single-handedly orchestrated the LSU tennis program’s rise to national prominence. In his nearly three decades as the head tennis coach at LSU, Robinson accumulated a 189-180-9 overall record and propelled the Tigers to a status among the nation’s elite.

Working with limited resources and a financially-deprived tennis program, LSU’s rise to the top of collegiate tennis can be traced back to Robinson’s warm personality and quick wit. Always a favorite among his players, Robinson transformed a team that had not won a match in three years into a team that finished with a 12-1 record and a second-place finish in the Southeastern Conference in only his sixth season at the helm. His great-granddaughter, Hannah Robinson, played for the Lady Tigers from 2006-10.

When the LSU tennis complex was completed in the fall of 1976, it was only natural that it was named after the person that built the program.