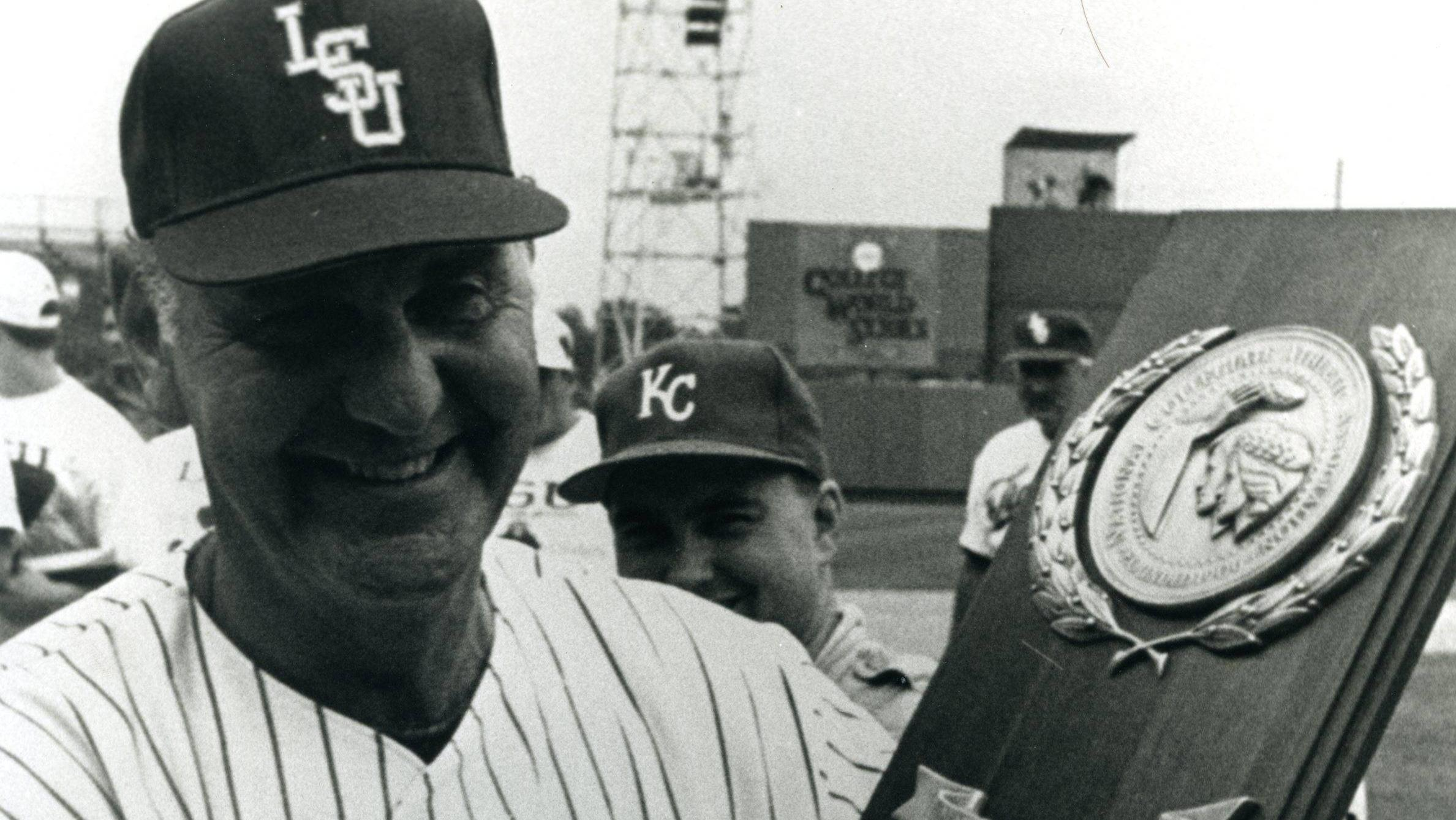 It was one of those moments when Skip Bertman must’ve said to himself, “How did I get here? Why did I come to Baton Rouge?”

It was February 1984 and there was a new baseball coach in town.

Bertman, trying to garner some publicity for the LSU program and reach the kids in the community, contacted local businessman and Tiger supporter Richard Lipsey with an idea.

They planned a baseball clinic for a Saturday morning before the season at Lipsey’s sporting goods store called Steinberg’s that was located near the Pastime restaurant under the Interstate-10 Mississippi River bridge.

“But on the same day, our store manager had planned a turkey-calling clinic at 10 a.m.,” Lipsey remembers. “But, I figured it wouldn’t be a conflict. We’d have the turkey hunters inside, and the baseball players outside.”

A large, half-page advertisement on the baseball clinic ran midweek in the Morning Advocate in Baton Rouge. A much smaller brief told of the turkey-calling clinic.

On Saturday, the 46-year-old Bertman, who was a former assistant coach at the University of Miami, drove to Steinberg’s and was delighted that throngs of people had lined up outside the store.

Then he saw all the people with turkey calls in their hands, not baseball gloves.

“I think that was Skip’s introduction to Louisiana outdoors,” Lipsey said laughing. “There were about three or four kids for the baseball clinic, and about 300 for the turkey clinic.”

Bertman, never a hunter of anything but high school and junior college talent, was crestfallen.

Bertman got most of it finished, including winning five national championships from 1991 through 2000 and leading the nation in attendance from 1996 through his final season in 2001 with an average paid crowd of 7,000 a game.

“Nobody wins five national championships anymore,” said Alabama coach Jim Wells, who was an assistant under Bertman from 1987-89 and Northwestern State’s coach from 1990 through 1994. “People here (at Alabama) ask me how he does it, and I just say, ‘Don’t ask. No one else can do it.’ People like him come once in a blue moon. You got Bear Bryant. You got Skip Bertman. They don’t come around much.”

Bertman retired from coaching after the 2001 season and became LSU’s athletic director later that summer. He was elected to the Louisiana Sports Hall of Fame by acclamation in his first year of eligibility.

Also on that day, former LSU quarterback David Woodley became the highest paid Steeler in history by signing a $2 million contract. He was traded from Miami because of an upstart rookie named Dan Marino.

Michael Jackson’s “Thriller” was the No. 1 album in the country. Van Halen’s “Jump” was the No. 1 single. A six-pack of Miller beer was $2.39. Marines officially began withdrawing from Beirut, Lebanon.

An LSU assistant coach named John “Mugsy” Mugarditchian was on the Alex Box P.A. trying to entertain the fans with jokes like, “Here’s a partial score. UNO 7.”

Clay Parker, a senior from Grayson, La., who also punted for the football team, threw six innings for the win over McNeese as LSU improved to 3-0 after opening the season with a double-header sweep at Southern Mississippi.

Parker, who had struggled throughout his career, was a rejuvenated pitcher that year and tied for the team lead with seven victories. He went on to pitch for the New York Yankees and watched with amazement at how Bertman quickly made LSU an annual College World Series contender.

“He’s done such a good job that it’s expected now that the LSU Tigers will be in the world series every year,” Parker said before Bertman’s final season.

“His honesty is the one thing I remember most,” said Lake Charles’ Chad Ogea, who was the winning pitcher in Bertman’s first national championship game in 1991 and went on to pitch in the World Series for the Cleveland Indians. “He’d let you know where you stand, whether it hurt your feelings or not. It was about trust. You don’t always get that in the pros.”

After Bertman’s first season, LSU rarely if ever played day games during the week.

“We played day games during the week back then, because I didn’t know a lot about the weather,” Bertman said. “And I wasn’t worried about the attendance yet. But I don’t remember a lot about the game.”

Bertman’s last game in Alex Box was much more memorable. After losing 10-7 to Virginia Commonwealth for the first time in the final round of an NCAA regional at Alex Box, the Tigers defeated the same team 14-9 for the regional championship and advanced to the Super Regional against Tulane at Zephyr Field.

“Naturally I had some ambivalent feelings,” Bertman said at the time. “I’m going to miss it. It’s been a storybook career. I just hope the ride isn’t over.”

The ride ended a week later when Tulane defeated LSU two games to one to advance to the CWS.

“I’ll miss all the players,” Bertman said through tears. “I’ll miss you people. Yeah, there’s going to be some times that will be tough.”

It was fitting Bertman’s last championship was won at Alex Box. It was home, and it was good to Bertman once he got it cleaned up.

“There was food on the walls when I got here,” he said.

Outstanding home records led LSU to seven Southeastern Conference championships and nine SEC West titles. Bertman’s final overall record was 870-330-3 for a .724 winning percentage, including a 328-159-2 mark in the SEC for a .673 mark.

Bertman started working furiously long before the failed clinic at Steinberg’s. In fact, he didn’t even wait until he got to Baton Rouge. He wrote his first speech to his unknown team on yellow legal paper while driving to Catfish Town from Miami in August 1983. He still has the paper – now laminated and kept in a safe place.

“Many things will be done,” he scribbled in reference to vast stadium improvements. “All this will happen as sure as I’m standing here.”

But not without many more frustrations. Bertman immediately didn’t like the river silt used on the infield at Alex Box. So he told a stadium worker he needed Georgia red clay.

“Where do you get that?” the worker asked. “I knew I was in trouble then,” Bertman said.

In a memo to Bill McClure of the LSU athletic department dated Nov. 14, 1983, Bertman listed 60 items he needed done. Little things like shower heads and soap dishes in the locker room and lights in the parking lot.

“That’s what Coach Bertman is all about,” said Ray “Smoke” Laval, who was Bertman’s first assistant (and his eventual handpicked successor) and stayed through the 1993 season. “The details. Everything was important.”

Bertman and Laval, who will replace Bertman after this season, improved Alex Box from A to Z, and they had plenty of help.

“The first thing I picked up at LSU wasn’t a baseball,” said pitcher Mark Guthrie, who played at LSU in Bertman’s first four years from 1984-87 and is still pitching with the New York Mets. “It was a paint brush.”

And before long the fans came in record numbers year after year and left their turkey calls at home.

It wasn’t so easy that first year, though. There were all those turkey callers to compete with.

Bertman also brought in live pigs for a kiss-the-pig promotion, which was revived during his last season.

“I think Skip Bertman brought marketing to a new level,” said Auburn coach Steve Renfroe, who played at Auburn from 1977-80 when baseball was more of a club sport and was an Auburn assistant from 1981 through 2000.

“Everybody jumped on that bandwagon,” Renfroe said. “Our league is so much better because of Skip, and the rest of the country is catching up. There are stadiums popping up everywhere. His legacy will not only be the five national championships and wins and losses, it’s going to be the total package.”

The program Bertman left behind is one of the few in the nation that makes money.

“The toughest obstacle was LSU itself,” he said. “People didn’t understand or believe that baseball could attract big crowds, and it could make money.” LSU athletic director Bob Brodhead, who hired Bertman, understood, but he was let go during the 1986 football season and replaced by Joe Dean.

“I couldn’t explain to Joe at first that we could make money with a regional,” Bertman said. “He thought it would cost him money, but he finally got it.”

Gradually many more got it.

Since 1989, virtually every SEC school has either built new stadiums or renovated existing ones. Auburn’s Plainsman Park and Arkansas’ Baum Stadium are as breathtaking as the best of the nouveau-minor league parks.

“I feel proudest of the fact that athletic directors now listen to baseball coaches,” Bertman said recently. “Because of gender equity, they know that this is the only sport they can go to to make money. That may not be the right reason, but they’ve noticed that.”

And in Baton Rouge, college baseball may have surpassed turkey calling.

“I feel mostly gratified that college baseball has become a larger profile sport than it was 20 years ago,” Bertman said. “Back then, sellout crowds and having people calling for tickets (not turkeys) were things you only dreamed about.”