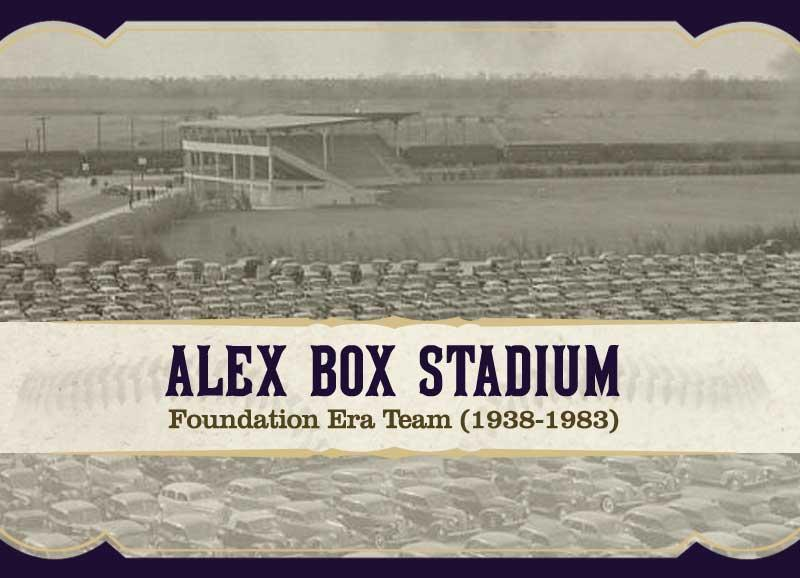 BATON ROUGE — LSU announced on Monday its All-Alex Box Stadium “Foundation Era” Team, an all-star squad of former student-athletes that played for the Tigers from 1938-83.

The 29-member team was selected by a panel of media and former LSU players and coaches. The Foundation Era encompasses the opening of Alex Box Stadium in 1938 through 1983, the year prior to Skip Bertman’s appointment as the Tigers’ head coach.

Later this week, LSU fans will be invited to vote online to select the members of the All-Alex Box Stadium “Omaha Era” Team. The Omaha Era team will include players that performed for the Tigers from 1984 ? Bertman’s first season ? to the present.

Voting for the Omaha Era team will continue through early May. The results will be announced prior to LSU’s May 9-11 SEC series versus Mississippi State.

The selection of the teams coincides with the commemoration of LSU’s final season in 70-year-old Alex Box Stadium. The New Alex Box Stadium, now under construction, will open in February 2009.

Richard “Dick” Hicks, 1967-68 ? Fired a one-hit game against Nicholls State on April 11, 1968); LSU ranked among nation’s leaders in 1967 & 1968 seasons with Bruce Baudier and Hicks on the mound; Hicks led LSU in wins, strikeouts and innings pitched (1968); drafted by Washington Senators and Houston Astros.

Dave Madison, 1941-43 — Career interrupted by World War II, signed by the New York Yankees, played most of Major League career with St. Louis Browns and Detroit Tigers; the righthander was regarded as one of the first “reliever-closers” in the big leagues; passed away on Dec. 8, 1985 in Macon, Miss.

Duane Dewey, 1979 — Led LSU in hits (64) and at-bats in his only season with the Tigers; All SEC Western Division (1979); Team leader for LSU’s first team in four-team SEC Tournament; First-round draft pick by Kansas City Royals.

Mike Miley, 1972-74 — Shortstop considered by many as LSU’s best-ever baseball player; switch hitter who once hit homers from both sides of the plate in the same game; first-team All-America (1974); two-sport athlete who was also LSU’s starting quarterback in 1973; two-time All SEC West; All-SEC (1972); led LSU in runs (three seasons), hits, doubles and triples (two seasons) and batting average, home runs and RBI (one season) while participating in spring football workouts; drafted in first round in 1974 by California Angels.

Joe Moock, 1964-65 — LSU’s first-ever drafted player, he was selected in the third round of the 1965 draft by the New York Mets; the older brother of pitcher Pat Moock and former LSU infielder Mike; father Joe Sr. played three seasons at LSU in early 1940s; drafted as third baseman after playing shortstop at LSU; led 1964 team in hits and homers and 1965 team in RBI.

Craig Burns, 1969-71 — All-SEC (1971); prototype centerfielder who combined speed and power; led LSU in one or more seasons in runs, hits, doubles, home runs, RBI and stolen bases; two-sport letterman, as he was the starting safety and punt returner for the LSU football squad;  first player in LSU history with more than 40 hits in a single season (1971).

Bob Leake, 1966-68 — All-SEC (1968); LSU leader in hits, doubles, triples, home runs, RBI and batting average in one or more of his three seasons; top utility man who could play left side of infield and had strong enough arm to play right field.