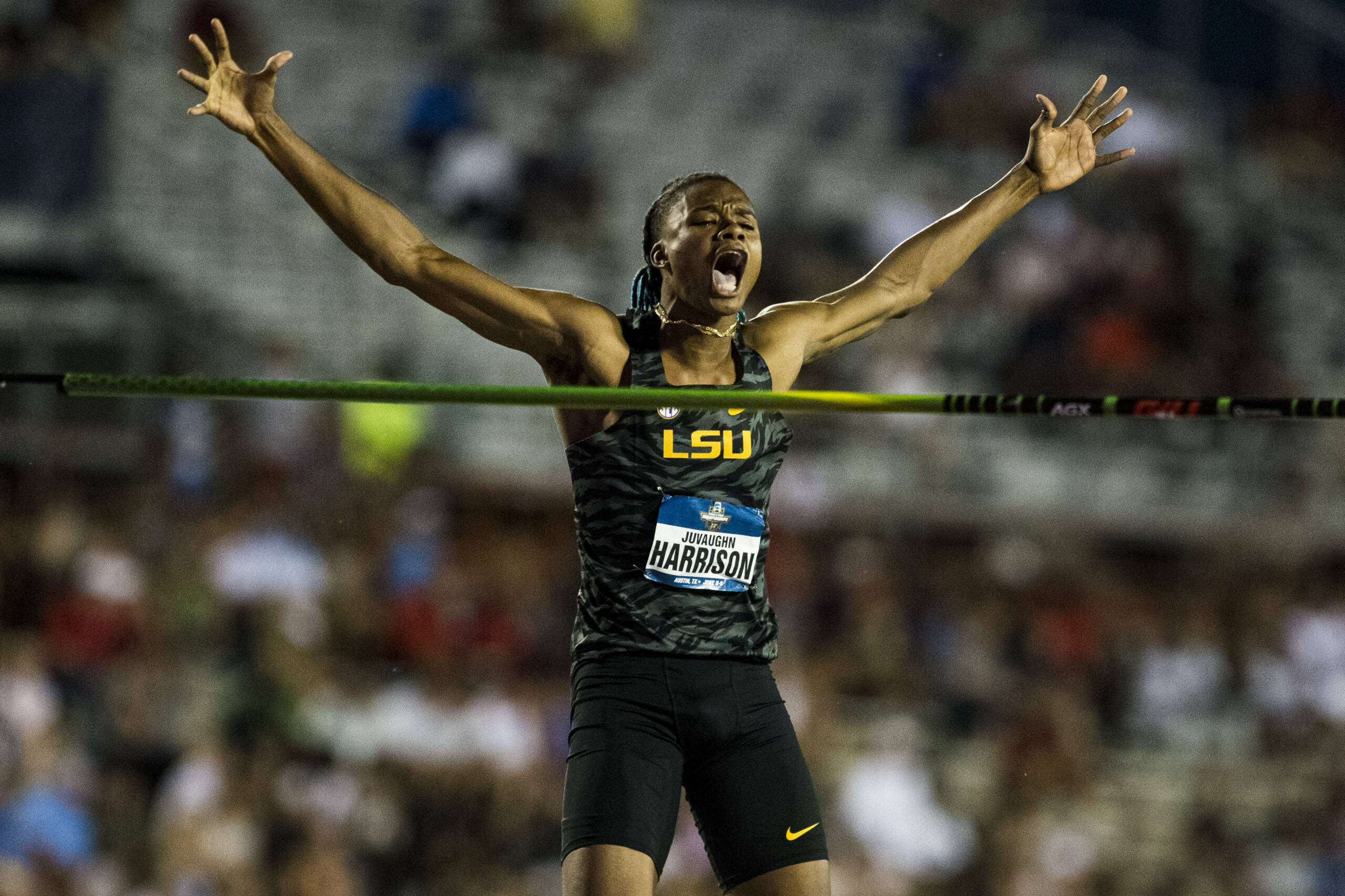 Two thoughts raced through JuVaughn Harrison‘s mind, as he prepared for the biggest jumps of his life.

Be clean, or jump your butt off.

Doing one or the other, Harrison knew, would give him a shot at the high jump national title.

Doing both, Harrison knew not, would give him a shot at history.

Two days after Harrison claimed an NCAA title in the long jump by leaping 8.2 meters into the pit – not too bad for a guy who used to consider himself “a high jumper who did long jump” – he was after the same result in the high jump.

The high jump has always been Harrison’s forte. It’s the event in which, last summer, despite coming off a disappointing-by-his-standards freshman season, he placed third to take bronze for the U.S. at the IAAF World U20 Championships, an accomplishment that both restored his confidence and made him hungry for more success.

It also ate at him – all year. All that separated him from gold last summer was one miss: he needed two attempts to clear the gold-winning mark of 2.23 meters his competitors cleared in one attempt.

He wouldn’t make that mistake again.

“Going into NCAAs, I just knew I had to be clean,” Harrison recalls. “And if I wasn’t clean, I was about to jump my butt off.

“So I was able to be clean and jump my butt off.”

Nine jumps and 2.27 meters later, Harrison held history in his hands, becoming the first man in NCAA outdoor championships history to win both the long jump and the high jump national titles.

The history didn’t stop there. The rare high-jump/long-jump dualist, Harrison became just the second man in outdoor track and field history to reach his marks of 2.27 meters high and 8.2 meters long, joining Germany’s Henry Lauterbach, who jumped 2.30 meters in the high jump in 1978 and 8.35 meters in the long jump in 1981.

“Sometimes I’ll be long jumping, and instead of going out, I’ll go up and and come straight back down into the sand and not jump as far. So it’s really just finding the balance between knowing when to go out versus when to go up.”

Harrison’s found that balance, and he has the hardware to prove it. He arrived at LSU in the fall of 2017 with more pedigree going up than out. His 2.18 meter PR high jump in high school was elite, ranking fourth in the nation among prep athletes, while his long jump failed to crack the top 25 nationally and fell a full meter short of the nation’s best mark.

“LSU recruited me for high jump, and then they would make me do long jump to take a little bit of pressure off of my time off from the high jump, because focusing so much on one thing can be bad,” Harrison says. “So then I was a high jumper who did long jump, but this year showed me I’m both a high and long jumper.”

It’s not just his legs that brought value to LSU this year. Harrison’s personality played a big part in the Tigers’ success as a team this year, which included the program’s first SEC outdoor championship since 1990.

“The way he carries himself – he’s so confident in what he’s doing now,” says NCAA record-holder Mondo Duplantis, who also lived with Harrison this year. “He’s doing two events, high and long jump, which aren’t very similar events. It’s very difficult, and I don’t think people understand how great the things he’s doing is. It’s so hard to switch from high jump to long jump, because of the rhythm of everything and how different they are in general.

“I think he brings a lot of fire to the team. We have a lot of characters on this team that hype everybody up, and he’s definitely toward the top of the list of people who motivate me to do my best.”

The motivation goes both ways. Harrison lived with three U20 gold medalists this year, and they used to joke with him about his bronze medal during the fall semester.

Safe to say, after netting 20 points for the team with a historic double, Harrison’s had the last laugh.

“JuVaughn had an incredible year,” Duplantis says. “He was probably the fourth best athlete at the time when we first moved into the apartment, he’s now at the top of it, for sure.”

The recipe for his ascension was simple: hard work. That included a new physical regimen, as Harrison bulked up and improved his strength, attacking the weight room all year with a ferocity fueled by his freshman season.

He also grew stronger mentally, buying in to what his coaches were telling him more and, as a byproduct, finding himself more relaxed come meet time.

“I just trusted the process, trusted my coaches,” Harrison says. “Last year, they were changing a lot, and I was very reluctant to change. This year I said, ‘You know what? I’m just gonna go all in and what happens, happens.’

As impressive as his sophomore campaign was, Harrison knows he still has room for improvement. He currently ranks second in school history in the high jump and fourth in the long. Next up. Fall training.

“I’m gonna focus on training hard this fall and trusting the process again. After that, my next goal is trying to repeat and get the double indoor and outdoor next year,” he says.

In other words, Harrison’s not done jumping his butt off, just yet.