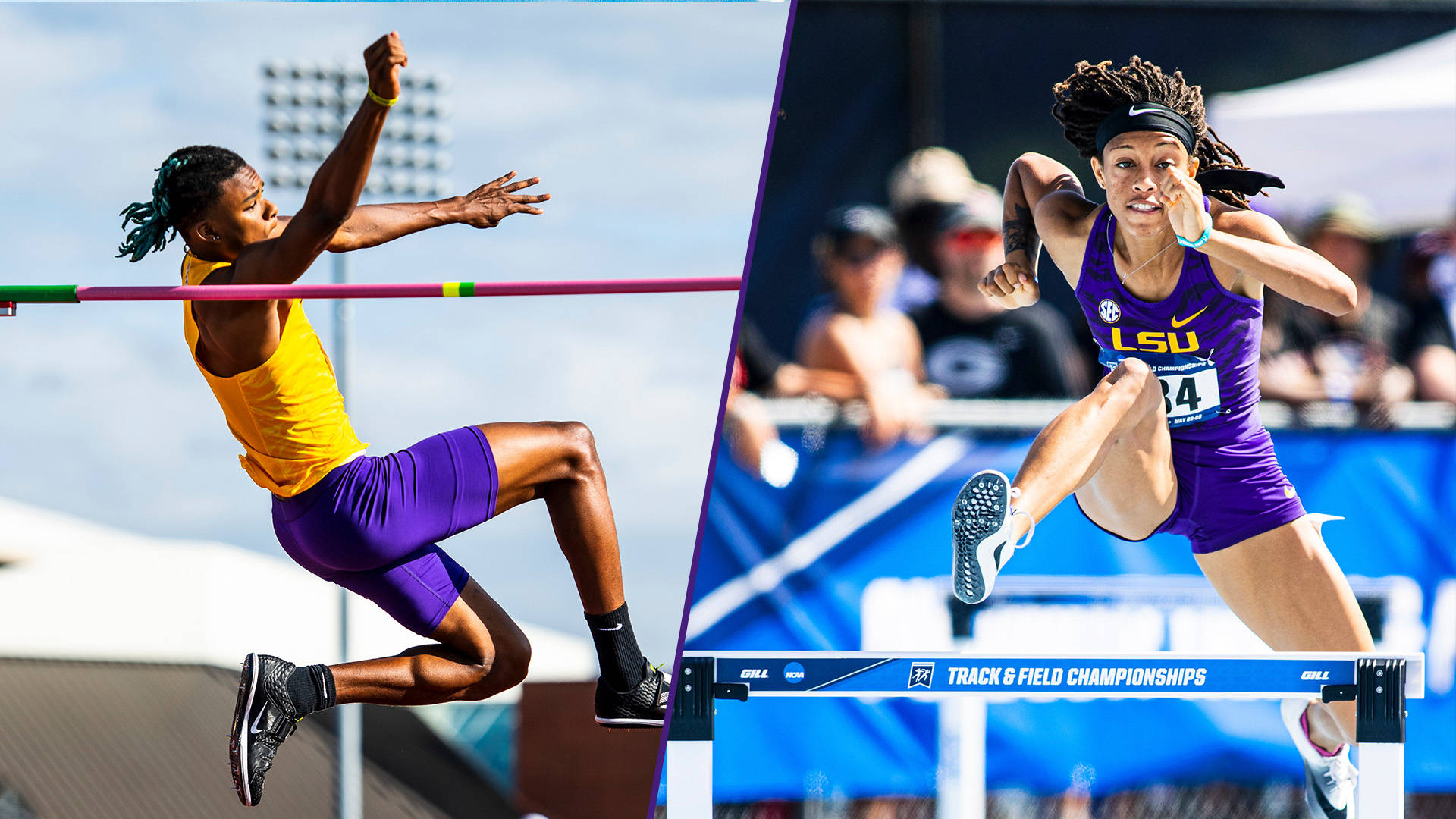 Baton Rouge, La. – The LSU track and field team has advanced 23 athletes (13 men & 10 women) to the NCAA Championships that will take place this week at the Mike A. Myers Stadium in Austin, Texas, June 5-8. Wednesday and Friday will feature action on the men’s side, while the women will compete on Thursday and Saturday.

The four-day meet will be covered in entirety by the ESPN networks with live TV slots on ESPN, ESPN 2, and ESPNU; in addition to the live TV coverage, live streams of field events will be available on WatchESPN too. Day one action for the men on Wednesday will air on ESPN2 beginning at 4 p.m. CT, and day one of action for the women on Thursday will be broadcasted live on ESPNU starting at 7 p.m. CT. The final day of men’s action will air on ESPN at 7:30 p.m. CT Friday evening, and the women’s final day of action (Saturday) will be covered on ESPN2 (5:30 p.m. CT). A dedicated live stream to each field event can be found at NCAA.com. A full competition guide for LSU can be viewed above.

The LSU men return 16 of its 28 points scored from a year ago at the NCAA Championships that earned them an eighth-place finish. The individuals returning on the men’s side who scored points a year ago are Jaron Flournoy (200 meters/fourth place), Rayvon Grey (long jump/fourth place) and Damion Thomas (110m hurdles/third place). The only woman returning with NCAA points on her resume is Tonea Marshall who placed sixth in the 100 meter hurdles at the 2018 national meet. Rachel Misher, Kortnei Johnson, and Correion Mosby will also be competing on the track at the NCAA Championships as relay members and they all helped score points a year ago in the relays.

Head coach Dennis Shaver has the men ranked No. 3 heading in the NCAA championship meet as defined by the U.S. Track & Field and Cross Country Coaches Association ratings index; the women will enter the final meet of the season ranked No. 6. FloTrack Predictions

The LSU women have won 14 national titles to lead the NCAA; the next closest programs are Texas and Texas A&M with four apiece. Speaking of the No. 4, that’s how many NCAA outdoor titles the men’s LSU program has claimed over the years; that number ranks as the seventh most in NCAA history. The LSU women won 11-straight outdoor national titles from 1987-1997 to go along with titles in 2000, 2003, and 2008. The most recent in 2008 was under the direction of current head coach Dennis Shaver. The men’s national titles were won in 1933, 1989, 1990, and 2002.

The Tigers have three athletes headed to Austin as NCAA champions. Kortnei Johnson has been a member of two NCAA winning 4×1 squads, while Jaron Flournoy and Rachel Misher have each won one apiece on the 4×1. Johnson won her first national title in 2016 as the second leg of the 4×1, and just a year ago Johnson was joined by Misher on the 4×1 and they were victorious at NCAAs in 2018. Johnson and Misher helped set an NCAA Championships meet record along with Aleia Hobbs and Mikiah Brisco when they ran a 42.09 in the prelim round at the NCAA meet. Flournoy served as the lead leg on LSU’s 4×1 in 2016 as they ran a 38.42 to win the NCAA title.

LSU travels to the NCAA meet with 10 individual athletes and two relays owning NCAA top-10 marks this season. JuVaughn Harrison (long jump) and Mondo Duplantis (pole vault) will be the two athletes favored to win their respective events; Duplantis is the collegiate record holder with a season best of 19′ 8.25” (6.00 meters) and Harrison has an NCAA leading long jump of 26′ 9.75” (8.17 meters). The men’s 4×100 meter relay’s season best time of 38.41 that they registered in March at the Texas Relays (held at Mike A. Myers Stadium) still rates as the best time in nation.

Harrison is one of two LSU men’s athletes pulling double duty at the NCAA meet as he will compete in the long jump on Wednesday night and the high jump on Friday night. He owns the No. 1 long jump in the nation and his season best high jump of 7′ 4.25” (2.24 meters) that he used to win an SEC title rates fifth nationally. Jaron Flournoy will be running the 100 meters, 200 meters, and 4×100 meter relay for LSU this week. Flournoy has the third-fastest 200 meter dash in the nation coming off his stellar performance at the NCAA East Prelims in which he clocked a personal best of 20.09. On the women’s side, the trio of Brittley Humphrey, Sha’Carri Richardson and Milan Young will run in two individual events apiece and on a relay. Humphrey and Young will pull the double in the 100 and 400 hurdles while running on the 4×4. Richardson will run the 100 and 200 meters while also anchoring the 4×1. In the 400 meter hurdles, Young’s season best of 56.42 is ranked No. 3 and Humphrey’s season best of 56.72 is No. 8 nationally. Richardson’s season best of 10.99 in the 100 meters that she ran at NCAA East Prelims is ranked No. 2 nationally, and she has a solid chance to factor into the 200 meters with a personal best of 22.57 to rank No. 7 in the nation.

Freshman LSU pole vaulter Mondo Duplantis made his eighth-straight appearance on The Bowerman Watch List on June 3. Duplantis is one of 10 male athletes on the pre-NCAA championships list, and he is only one of three male athletes to be on all eight ‘The Bowerman’ watch lists this year with Grant Holloway (Florida) and Divine Oduduru (Texas Tech). Sha’Carri Richardson has now made the last two Bowerman watch lists as she has come on strong on the national stage in her last two meets.

Duplantis set the collegiate record at the SEC Championships on May 11 with a season-best clearance of 19′ 8.25” (6.00 meters) to win the SEC title. The mark of 19′ 8.25” was the second-best jump of his career only trailing his 6.05 meter jump at the 2018 European Championships. Duplantis owns two of the top three jumps in NCAA history as his 19′ 5.75” clearance at the LSU Invitational in April ranks third on the all-time NCAA list.

Duplantis has competed for LSU nine times so far this year with five of those appearances coming indoors, and the last four having been outdoors. He won a national title indoors and he set the collegiate indoor record with a clearance of 19′ 5” (5.92 meters) at the SEC Championships. He has claimed gold in the eight times he has competed collegiately; he took second at the NCAA Prelims but that was only because he retired from the competition after he had clinched his spot at the NCAA Championships.

Richardson has continued to excel during her freshman season in Baton Rouge. Richardson became the first woman in SEC history to sweep the 100 meters (11.00), 200 meters (22.57), and 4×100 meter relay (42.93) during her freshman season at the SEC Championships in mid-May. Most recently, she just ran a wind-legal personal best of 10.99 seconds in the 100 meters at the NCAA East Prelims on May 25 to make her tied for the fastest freshman in NCAA history alongside Twanisha Terry of USC who ran a 10.99 during her freshman season in 2018. The time of 10.99 in the 100 meter dash is the fourth-fastest wind-legal 100 meter dash time in U20 world history, and the second fastest by an American U20 woman in history. It’s also a 2019 U20 world lead, a 2019 world overall No. 2, and the sixth fastest in LSU history. Richardson also ran a wind-aided 10.91 in the 100 meters in late March at the Texas Relays that wowed the crowd in Austin, Texas, where the NCAA Championships will be contested next week; the 10.91 that was aided by a 4.3 meters per second tailwind was the third-fastest all-conditions time every run by an athlete in world U20 history. Richardson is scheduled to compete in the 100 meters, 200 meters, and 4×100 meter relay at the NCAA Championships this week.

Sophomore jumper JuVaughn Harrison will factor into LSU’s championship aspirations on the NCAA level this week. Harrison is currently the NCAA leader in the long jump and ranks No. 5 in the high jump in the NCAA. At the 2019 SEC outdoor meet, Harrison racked up 14 points for the Tigers with a win in the high jump (10 points) and a fifth-place showing in the long jump (four points). Harrison’s NCAA leading long jump came this season at the Miami Hurricane Invitational when he leaped out to a mark of 26′ 9.75” (8.17 meters) to rank fourth all-time in the LSU record book. Just one week after that at the LSU Alumni Gold, Harrison set an outdoor personal best of 7′ 4.25” (2.24 meters) in the high jump to rank fifth nationally in the event and third in the LSU record book. Harrison is the only competitor in the field to be competing in both the high and long jump.

LSU’s star senior sprinter, Jaron Flournoy, will look to have the biggest meet of his career to date this week as he is entered in the 100 meters, 200 meters, and as the anchor of the 4×100 meter relay. Flournoy is without a doubt a national title contender in the 200 meters as he is just coming off his career best of 20.09 in the event that he ran at the NCAA East Prelims. The 100 meters will be a bit tougher on him as he enters the meet ranked just outside the top 15 nationally in the event with a season best of 10.12. If he can somehow find a way to qualify to the finals of the 100 meters, that would be huge for LSU. In the 4×1, get Flournoy the stick within closing distance and the Tigers have a chance to win it all. He anchored the current NCAA leading 38.41 at the Texas Relays in March.

LSU’s men’s jumps crew scored 28 points for the men’s squad at the 2019 NCAA indoor championships with national titles from Mondo Duplantis (pole vault) and Rayvon Grey (long jump) to go along with a runner-up finish by JuVaughn Harrison. If the Tigers want to have a chance at the national title, the jumps crew will have to do that and more this week in Austin, and they are more than capable of doing so. Duplantis, Grey, and Harrison will need to be as crisp as they can be in their events, and Harrison will need to go big in both the high and long jump. Don’t forget about triple jumper Christian Miller either. He registered a personal best of 16.16 meters (53′ 0.25”) at the SEC Championships to win the SEC title, so he has big jump capability within him. One other guy that might sneak up on the field is Kenan Jones, the two-sport athlete for the Tigers. Jones registered a personal best of 25′ 2.75” (7.69 meters) in the long jump at the NCAA East Prelims to qualify to this meet. There is no telling what he could pop off at the NCAA meet as he has continually progressed throughout the season. On Wednesday night in the long jump, Grey, Harrison, and Jones will be three of the last four competitors to compete, so they will know what marks are needed to get the three extra jumps all jumpers crave.

LSU owns the most NCAA 4×1 national titles on both the women’s and men’s side. The women have won 15 dating back to 1985 and the men have captured nine in program history. The women have won two out of the last three at the NCAA meet, and the men last won it in 2016. The men are tied with USC for the most in NCAA history as the Trojans also have nine, and the women’s 15 titles are nine more than the next closest program (Texas A&M).