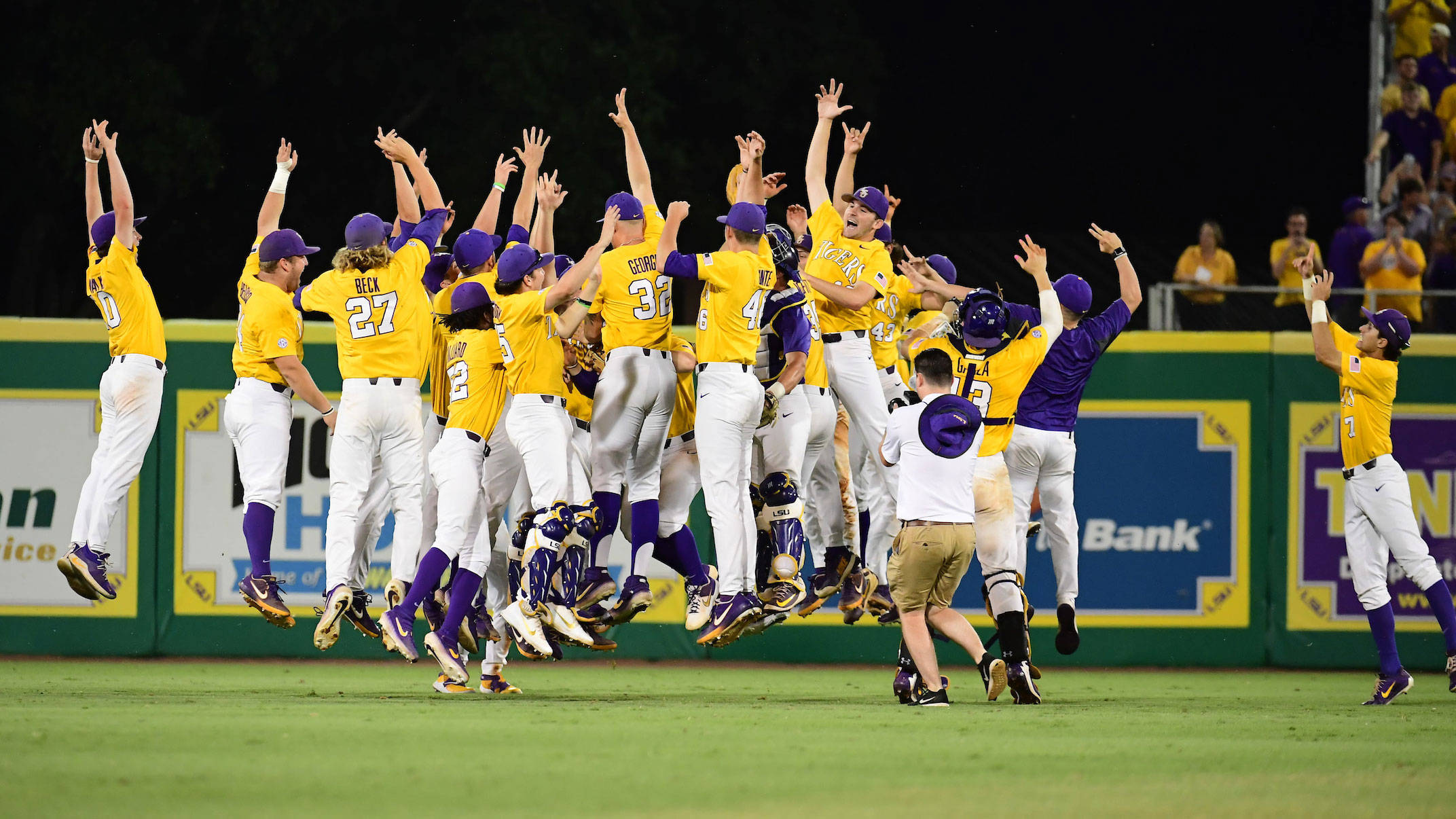 BATON ROUGE — LSU’s Josh Smith drove in three runs with a home run and a triple to lead the 13th-seeded Tigers to a 6-4 victory over Southern Miss in the NCAA Regional final late Sunday at Alex Box Stadium, Skip Bertman Field.

“What a great victory for our team,” said LSU coach Paul Mainieri. “I am just so happy for our team. It was a total team effort. We had some real heroes tonight that stepped up and did some extraordinary stuff.

“Southern Miss tested us and took us to the limit in both games that we played against them this weekend. We found a way to win both games which we have done in a lot of games this year. Our record in the close games is really outstanding.”

The Tigers took a 3-0 advantage through two innings before Southern Miss (40-21) rallied to lead 4-3 in the top of the fifth. With Zach Watson‘s two-RBI single in the seventh, LSU took a lead they wouldn’t relinquish.

Next weekend, LSU will play host to Florida State (39-21) in the best-of-three series to begin either Friday or Saturday. Dates, times and television for the series will be announced by the NCAA late Monday. Ticket Information is available below.

Florida State advanced to the Super Regional as a No. 2 seed by defeating host and No. 4-seed Georgia twice this weekend.

The Tigers and Seminoles have split 18 all-time meeting, with LSU holding a 4-2 advantage in postseason play including a pair of wins in the 2017 College World Series.

On the first pitch of the bottom of the first inning, LSU took a 1-0 lead when Smith belted a home run into the right field bleachers.

Two batters later, senior rightfielder Antoine Duplantis broke Eddy Furniss’ 21-year-old LSU career hits record with his 353rd, a line-drive single to center field. Duplantis, who also broke the program record for games played tonight (267) was given a standing ovation by the Tigers faithful, as he tipped his cap from first base.

As starter Eric Walker mowed down the first nine Golden Eagles he faced, LSU extended its advantage to 3-0 with a two-out rally in the bottom of the second. Chris Reid legged out an infield single and Hal Hughes walked before Smith smashed a bases-clearing triple into the left-center field gap.

Southern Miss’ first hit came on a solo home run by Gabe Montenegro, who hit the first pitch in the top of the fourth into the right-field stands. LSU led 3-1.

In the fifth inning, the Eagles took their first lead of the tournament against LSU, as a walk, a sacrifice bunt, an infield single and a wild pitch put runners on second and third with one out. Danny Lynch’s two-RBI single to right-center tied the game at 3-3, and Walker was lifted in favor of Matthew Beck following a walk.

Beck allowed an RBI single to Matthew Guidry that put Southern Miss ahead 4-3, and loaded the bases for Eagles’ cleanup hitter Matt Wallner. Wallner, second in the NCAA in career home runs (57) among active players, struck out on a 3-2 offering from Beck to end the threat.

Though the Tigers left the bases loaded in the sixth inning, LSU regained the lead, 6-4, in the seventh with three runs.
Duplantis singled to lead off and took an extra base on Daniel Cabrera‘s single. With both in scoring position, Watson lined a single to center field that flipped the scoreboard in the Tigers’ favor, 5-4.

Tournament Co-Most Outstanding Player Saul Garza added an RBI double off the right-center field wall that nearly left the park. Watson’s run pushed the advantage to 6-4 with no outs, when Southern Miss’ Adam Jackson entered and got help from his defense to end the inning.

After two scoreless innings of work, LSU’s Trent Vietmeier (3-1) was relieved after allowing a base hit to open the top of the eighth inning. Devin Fontenot allowed a walk to the first batter he faced before getting a pair of ground outs and a strikeout to hang a zero on the scoreboard.

Fontenot worked around a hit batter in the ninth to earn his seventh save of the season.

“I am so happy for Devin Fontenot finishing the game,” Mainieri said. “He has had some ups and downs this year. To see him get that last out was great. I don’t think it would have been possible without the great job from Trent Vietmeier.”