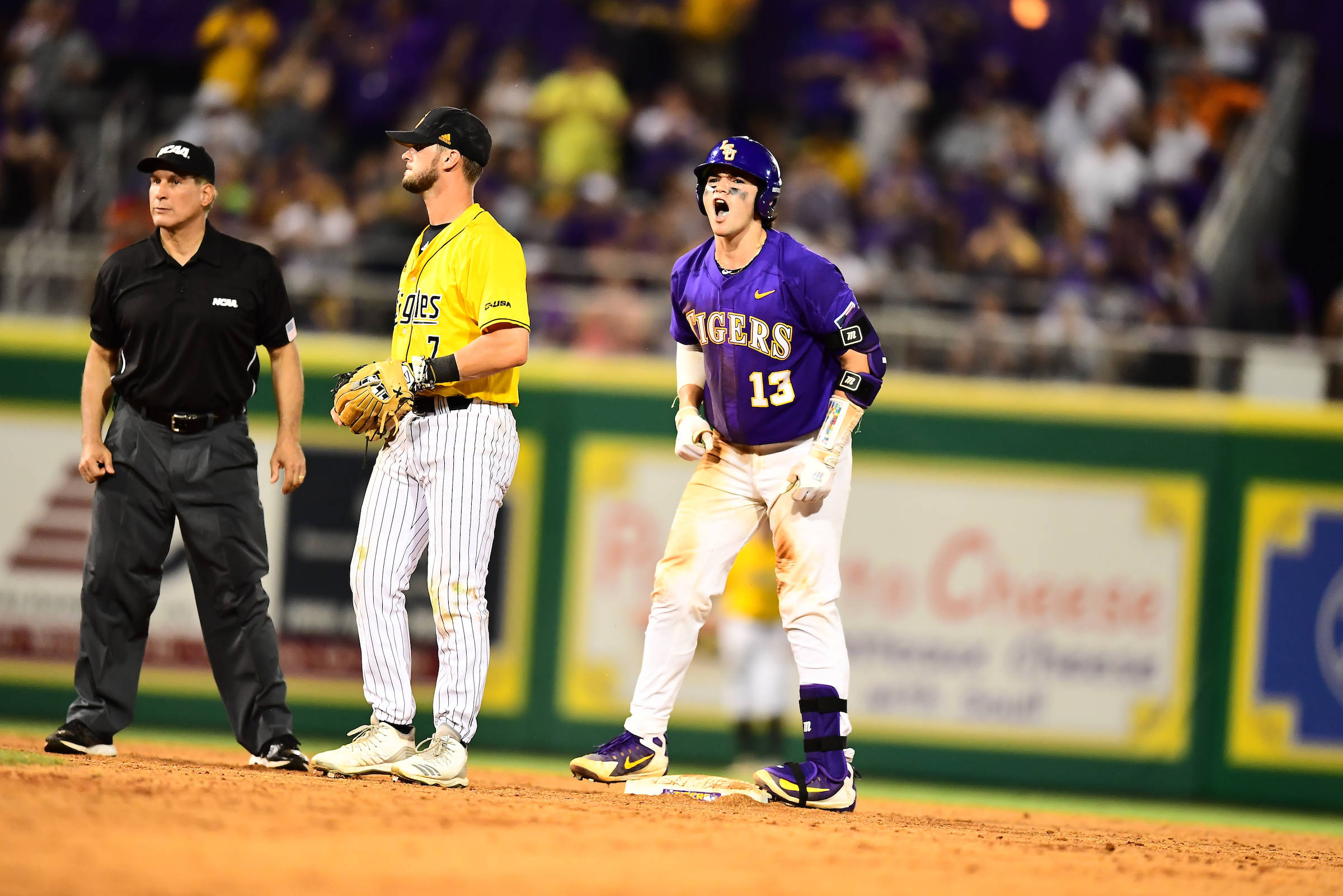 More than 11,000 fans were on their feet, screaming loudly and continually and maybe profanely, when Saul Garza stepped to the plate in the top of the 8th inning Saturday night.

None of them, however, were rattlesnakes.

So Garza relaxed, and despite the fact that the score was tied and the bases were loaded and the Tigers had just lost all the momentum they’d spent seven innings building in one swing the inning prior, he did what he’s done for weeks now.

Garza’s bases-loaded single scored two and broke a four-all tie, swinging the momentum and the result back LSU’s way in an 8-4 win over Southern Miss on Saturday night.

As his red-hot catcher strode to the plate for the biggest at-bat of his career, Paul Mainieri marveled at his calmness.

“I was – I don’t want to say ‘surprised’ – but he’s up to the plate, the crowd’s on its feet, there’s 11,000 people screaming like crazy,” Mainieri said. “I just can’t imagine he’s ever been in that position before in his life. And he had such a calmness about him up at the plate. His calmness gave confidence to me and to the rest of the team that he was going to come through, and he comes through with that big hit.”

This was the player Mainieri recruited out of Howard College in Big Spring, Texas, the player who used to text him photos of rattle snakes he’d killed in his yard back home in Edinburg, Texas. Set aside the 20 homers Garza hit in JUCO – those texts told Mainieri all he needed to know.

“I figured if the kid had courage enough to fight rattlesnakes in his yard, he could probably play baseball at LSU,” Mainieri joked.

It’s the continuation of an incredible hot streak for Garza, who has now hit .541 (20-for-37) in the past few weeks. He’s on a 10-game hitting streak and a six-game streak of having at least two hits in each contest.

The rest of the lineup is following suit. They keep delivering in big moments. LSU is 8-for-18 with runners in scoring position in two games of regional play. Cade Beloso drove in the first two runs of the game on a solo homer and a sacrifice fly, and Zach Watson continued his unprecedented regional output, hitting his second homer of the weekend to make it 4-0 in the sixth.

“He goes on streaks,” Mainieri said of Watson. “Hopefully his confidence continues to grow and he’ll come out tomorrow and do something special again.”

Others were special, too. Brandt Broussard and Josh Smith each went 2-for-5 with a run scored. After Southern Miss tied the game at four with a grand slam in the bottom of the 7th, Daniel Cabrera – who also had two hits – led off the 8th with a double in what Mainieri called “the biggest at-bat of the game.” After Beloso took a curveball off his foot and Watson walked, Garza came through with his single – then took second on the throw to set up Chris Reid‘s ensuing RBI single.

The big plays are becoming a contagion.

“I feel like right now, the whole lineup is stepping up in big situations,” Garza said. “That’s something that, early on in the season, we were getting hits, but in big situations, we didn’t really get hits when we needed them. I think the whole team, when guys are getting in scoring position, we’re really bearing down and trying to get runs across, trying to be tough outs, and put up runs for these guys.”

These guys – as in, the pitching staff, which also came up big Saturday. Freshman ace Cole Henry, making his second start after a month-long hiatus from a sore elbow, gave LSU five innings of one-hit, shutout ball, striking out six and stranding runners in scoring position in the second and fifth innings.

Mainieri took some criticism for throwing Landon Marceaux – who shined in Henry’s absence over the month of May – on Friday rather than Saturday, but he knew Henry was up for the challenge.

“You can see why I pitched Henry in this game,” Mainieri said. “I can tell you, a month and a half ago, I said to myself, ‘That’s the guy we’re going to pitch in the winner’s bracket game in a regional.’

“In my opinion, Cole Henry is going to be, if he’s not already, one of the best pitchers in the country.”

His relief gave up the four-run lead it held after six innings, but it fought through adversity to seal the win. Todd Peterson threw a solid sixth inning, but walked one and hit two to start the seventh.

Peterson handed the ball off to Zack Hess, who threw a 1-2 curve six inches above the ground and watched USM’s Matthew Guidry golf it into the right field bleacher to level the score.

“I was really hoping our offense was going to get me a lead again,” Hess recalled thinking, “because I didn’t really want the people of Baton Rouge to burn down my house tonight.”

Instead, the bats caught fire, and Hess did, too. After the homer, he threw three innings of one-hit, shutout baseball, striking out four and sending LSU into the regional championship game Sunday night at 8 p.m. with much of its staff still available to throw.

That final out was pic.twitter.com/XksSwJOqd9

Hess also saw everything coming together: bats getting hot, arms getting healthy, and the Tigers winning baseball games in June.

“I think we’re playing at a different level,” he said. “The resiliency and character of this team has stayed true throughout the whole year. I think now, we’ve had a few guys who were scuffling really step up. (Saul) has contributed to the success of our team as much as anybody else. Brandt has gotten hot here recently. And we have people who are starting to get healthy – for example, Cole. We haven’t had him in a month. That’s our ace, and he goes out there and pitches like the best pitcher in the SEC.

“The character of this team has stayed true throughout the year. I think what you’re seeing now is guys are playing to their potential and we’re starting to get guys healthy.”

Garza is the embodiment of both. His slow start was, in part, due to a knee injury that kept him from catching for the early parts of the season. Like his team, he’s gotten healthier and more confident, and the results are easy to see.

“I just think as of late, the pitching has been great, so I feel like I’m more relaxed at the plate,” he said. “I’m not trying to hit a home run every pitch. I’m just trying to hit the ball hard somewhere, and good things will happen.”

The snake is eating its own tail, and Garza will be happy to let this one live.