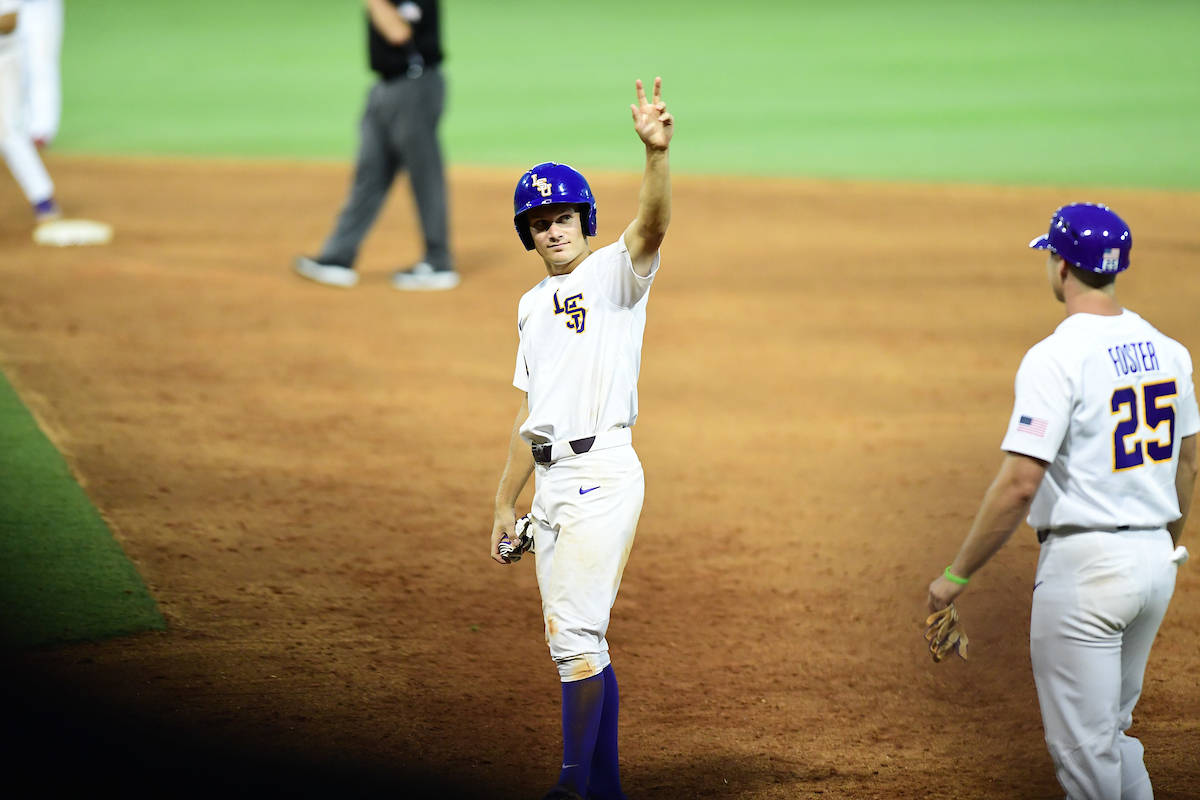 For the eighth consecutive year, LSU has won its regional opener, and it marks the 30th-straight regional opening victory, which is the longest streak in the history of the NCAA tournament.

LSU will meet Southern Miss at 6 p.m. CT Saturday in “The Box.” The contest will be streamed on ESPN3, which is available on ESPN’s digital platform. There will be no over-the-air television broadcast for Saturday’s games in the Baton Rouge Regional.

Fans can listen to the game free at www.LSUsports.net/live and on the LSU Sports Radio Network, including 98.1 FM in Baton Rouge.

“Antoine Duplantis, I am so proud of him,” said LSU coach Paul Mainieri. “I can’t tell you how proud I am of him. To tie the all-time hits record with the great Eddy Furniss. I count myself as the lucky one who’s gotten to see every one of them. It was a great win for us.”

Freshman Landon Marceaux improved to 5-2 on the season after throwing only 53 pitches in five innings. He limited Stony Brook to two runs — one earned — on seven hits, walked one and struck out three.

“Landon did exactly what we had hoped he would do,” Mainieri said. “I’ve had enough experience with that Stony Brook club to know that they’re scrappy, hard-nosed, tough and they were very aggressive. I think they’re aggressiveness worked in our favor tonight because it kept Landon’s pitch count down. Sometimes they ambushed first pitches and got base hits. I think what Landon did was terrific.”

Ma’Khail Hilliard was the first Tiger out of the bullpen and he allowed one run on one hit and struck out two in the sixth. Trent Vietmeier made his first appearance back on the mound since May 10 at Arkansas. He, Chase Costello and Rye Gunter combined for the final three innings, blanking the Seawolves after allowing two hits and striking out three.

“We only had 10 hits, but our hits really came in clutch situations,” Mainieri said. “We had a three-run double from (catcher) Saul Garza in the first inning, which kind of set the tone for the ball game. (Second baseman) Brandt Broussard had a big night with a clutch first-inning single and later a three-run homer. What I was really proud about is how our guys just didn’t let up. Every inning we went out there and had terrific at-bats and clutch hits.”

Stony Brook was first on the board in the top of the first inning. First baseman Chris Hamilton singled through the left side and moved to second on a wild pitch before scoring on an error by the shortstop.

The Tigers erupted for five runs on two hits and one error in the bottom of the inning to make it a 5-1 game. With the bases loaded and two outs, first baseman Chris Reid drew a walk before Garza cleared the bases with a double down the right field line. Broussard followed with a RBI single to center field to round out the five-run first inning.

In the bottom of the second inning with shortstop Josh Smith on second base after a single and a stolen base, Duplantis slapped an RBI single up the middle. With runners in scoring position after a base hit by left fielder Daniel Cabrera, designated hitter Cade Beloso hit a sacrifice fly to left field to bring in Duplantis. Center fielder Zach Watson then hit a moon shot to left field for his sixth home run of the year, a two-run blast, to put the Tigers up 9-1.

Duplantis drove in two runs in the bottom of the third with his single through the right side to extend the LSU lead to 11-1.

With runners on first and second in the fourth, Broussard unloaded his first career home run to left field to put LSU up 13-1.

In the top of the fifth inning, center fielder Michael Wilson drove in second baseman Brandon Janofsky on a fielder’s choice.

With the bases in the fifth inning, Watson was hit by a pitch, Reid hit a sacrifice fly and Garza reached on a fielding error, which resulted in three runs for the Tigers to make it a 17-2 game.

The Seawolves finalized the score at 17-3 when left fielder Dylan Resk homered to left field to open the sixth inning.