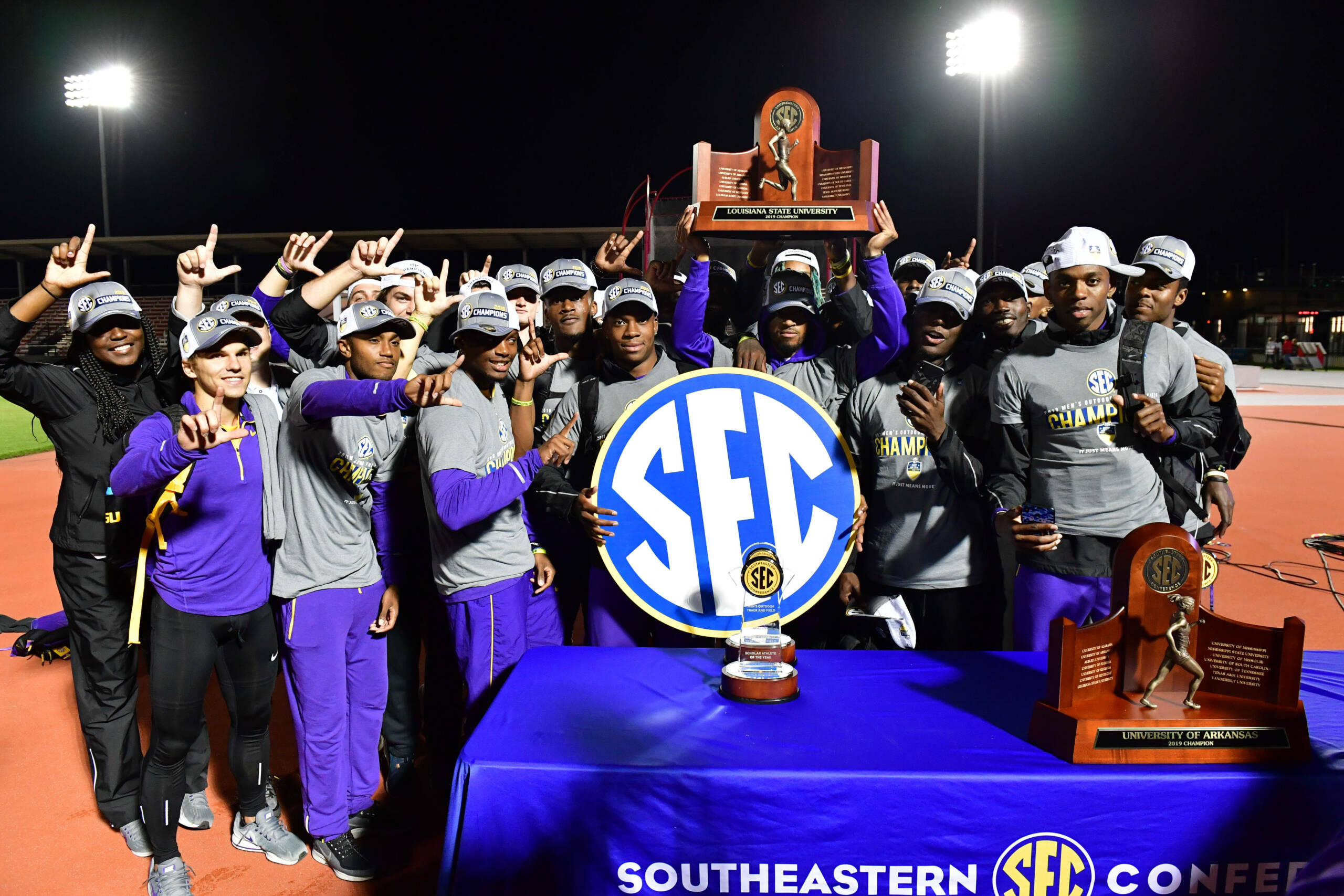 “I’m really proud of this team,” head coach Dennis Shaver said. “The chemistry and commitment that these guys have made to make a run at this championship is special. It’s been a while since we won one of these, but we’ve been in the hunt many other times. We’re really proud of how we are always in the mix.” Full Interview

Head coach Dennis Shaver‘s 4×400-meter relay team of Dorian Camel, Correion Mosby, Jaron Flournoy and Tyler Terry finished second in the event to unseat defending champion Florida, 105-95, and claim the Tigers’ first outdoor SEC title since 1990. The 4×400 closed out the meet with a time of 3:02.09, a time that ranks No. 2 in the NCAA this season.

With 83 points, LSU’s women finished fourth in the team competition, two points behind Texas A&M (85) and a point behind Kentucky (84). Homestanding Arkansas (139.5 points) won the meet for the fifth time in six seasons.

You’d have to go all the way back to 2002 to find the last time an LSU men’s triple jumper – all-time great Walter Davis – won an outdoor SEC title in the triple jump, but junior Christian Miller put an end to that drought with the best leap of his career on his sixth and final attempt of the event. Entering the sixth round in fifth place, the native of Monroe, La., leapt out to a personal best of 53′ 0.25” (16.16 meters) to eclipse Florida’s Clayton Brown (15.92 meters) for the title. The jump set the tone for the rest of the day and shifted the momentum to the Tigers early in the day. Senior Da’Quan Bellard pitched in three points with a sixth-place finish in the event (50′ 11”).

The 13 combined points in the triple jump by Miller and Bellard moved LSU up into third place with 41 points, eight behind the meet leader Florida, who had 49 with 11 events remaining in the meet. The aforementioned 4×100 meter relay circled the track in 38.85 for its fourth-straight conference title. A fun fact about that is that Flournoy has ran on each of the last four SEC winning 4x1s for LSU.

After the 4×100 meter relay, the Tigers received quality scoring performances from Damion Thomas in the 110 meter hurdles, and Tyler Terry and Raymond Kibet in the 400 meters. Thomas took seventh in the 110 hurdles with a readout of 13.78. Terry captured bronze in the 400 meters at his first-career SEC outdoor meet with a 45.96, and likewise, Kibet scored two points with seventh place finish at his first-ever SEC outdoor meet with a time of 46.81.

LSU faced a bit of adversity in the finals of the 100 meters. With three guys qualified for the final of the 100 meters running against two of Florida’s sprinters, LSU needed to score big points and gain ground on the Gators. After a false start by Kary Vincent Jr., Florida’s Hakim Sani Brown (9.99) and Raymond Ekevwo (10.02) went one-two in the race to tally 18 points for Gators in what looked like it might have been a knockout punch. Flournoy took fifth in 10.12 seconds, and Akanni Hislop scooped up one point in eight with a time of 10.23.

Christian Boyd steadied the meet for the Tigers with a season best of 50.49 in the 400 meter hurdles to score four points for the Tigers, but once again, Florida kept its advantage thanks to a fourth-place finish by Cory Poole, who narrowly outran Boyd for fourth place.

Boyd’s four points brought LSU’s point total for the meet to 70 with four events remaining (200m dash, 5,000m run, pole vault, 4x400m relay), a wide 21 points behind Florida’s 91 points, but that’s when the tides changed. Florida’s Sani Brown, who won the 100 meters earlier in the evening, was the favorite in the 200 meters, but he was unable to run in the 200 meters which opened the door for the Tigers. LSU had four runners in the finals compared to Florida’s now zero and the foursome donning the Purple and Gold made their move.

1⃣7⃣ points from @LSUFlow, @KannifasterDanU, @1itsawrap and @CaTcH_aNd_RuN get us back in this thing! We’re down four points with three events remaining (pole vault, 5,000m, 4x400m relay).

Neither squad had any scorers in the 5,000 meters, but oh boy did the Tigers have the advantage in the pole vault with Mondo Duplantis. The world-class pole vaulter made the most of his first SEC outdoor meet in stunning fashion. Let’s go back three and a half months to late February first. Duplantis won his first SEC title with a indoor collegiate record setting clearance of 19′ 5” (5.92 meters), and out of all the places, it happened in Fayetteville, Ark., at the Randal Tyson Track Center.

Fast forward to Saturday evening and the Tigers needed nothing less than 10 points out of the hoss from Lafayette, La. Competing in a field of 21 pole vaulters, the calm and collected freshman had to wait over two hours for his first attempt on the runway. He cleared his first bar of the night at the height of 17′ 10.50” (5.45 meters), before moving on to 18′ 5.50” (5.63 meters). His only remaining competition once he got to that height was Jacob Wooten of Texas A&M. Wooten actually passed at 18′ 5.50” and Mondo cleared that on his attempt. Wooten’s next attempted height was a bar at 18′ 8.75”, and he faltered three times to give Mondo the title.

After Mondo had secured the title, his first goal was to set the meet and facility record. He moved the bar to 19′ 0.75” (5.81m), a quarter of an inch above the meet and facility record. Sure enough the phenom cleared that bar on the first height, and then he set his eyes on the collegiate record. He moved the bar to 19′ 8.25” (6.00 meters) to give Tennessee’s Lawrence Johnson’s collegiate record a go. Johnson had been the outdoor collegiate record holder since 1996 with a outdoor best of 19′ 7.50”. Mondo’s first two attempts were close misses, but it was on the third and final jump that history was finally accomplished.

Gliding through the night air, Duplantis went up and over 19′ 8.25” on his third attempt of the evening to become the indoor and outdoor pole vault collegiate record holder. But most importantly, his 10 points pushed LSU into a 97-91 lead over Florida with only one event remaining – the 4×400 meter relay.

The foursome of Dorian Camel, Correion Mosby, Jaron Flournoy, and Tyler Terry used a season best of 3:02.09 in the 4×400 meter relay final to earn silver and clinch the title for the Tigers. And that’s how it all went down. On a brisk, chilly night in the city of Fayetteville, Ark., the men in the Purple and Gold accomplished a feat that had not been done in nearly 30 years.

Entering the final day of competition the LSU women’s team only had three points to its credit thanks to Lisa Gunnarsson’s sixth-place finish in the pole vault. The Lady Tigers made a big charge on the final day aided by Sha’Carri Richardson’s big day and lots of points by the hurdles crew.

The women’s 400 meter hurdle crew amassed the most points of the day for the Lady Tigers with an astonishing 1-2-3 finish in the race for a total of 24 points. Sophomore Jurnee Woodward led the way and clocked a PR of 56.77 to claim her first ever SEC title, and she was followed by Brittley Humphrey (56.88) and Milan Young (57.62) in second and third place; both Humphrey and Young both registered personal bests as well. Earlier in the evening, the 100 meter hurdling trio of Tonea Marshall, Humphrey and Young combined to rack up 11 points. Marshall finished third with a time of 12.82, Humphrey checked in with a 13.08, and Young closed with a 13.20.

It’s an LSU SWEEP in the 400 hurdles! @JurneeWoodward wins the title and @brittleyH takes 2 and @laniiasia places third!

The women’s 4×100 meter relay of Tonea Marshall, Kortnei Johnson, Rachel Misher, and Sha’Carri Richardson won the LSU women’s fourth-straight SEC title in the event with a season best of 42.93. Like many times before, the win for LSU featured a chase down by Richardson on the anchor leg. It was Johnson’s fourth-straight title in the event as a member of the 4×100 meter relay.

In addition to Richardson’s win in the 100 meters, freshman Ariyonna Augustine clocked a season best of 11.39 to take seventh and earn two points for the Lady Tigers. In the women’s 800 meter run, Ersula Farrow (2:06.32) and Katy-Ann McDonald (2:07.06) went four-five to scoop up nine team points. The final individual score of the day for the LSU women was sophomore Abby O’Donoghue in the high jump; she cleared a bar of 1.75 meters (5′ 8.75”) for a sixth-place showing.

Sha’Carri becomes the third freshman in LSU history to win the SEC 100 meter title! She joins Peta-Gaye Dowdie (1997) and Muna Lee (2001) as the three LSU women to achieve the feat!#GeauxTigers pic.twitter.com/YXh3wLjxI2

PR of 53′ 0.25″ on his sixth and final jump earns Christian Miller the title!#GeauxTigers pic.twitter.com/XSISnllj3H