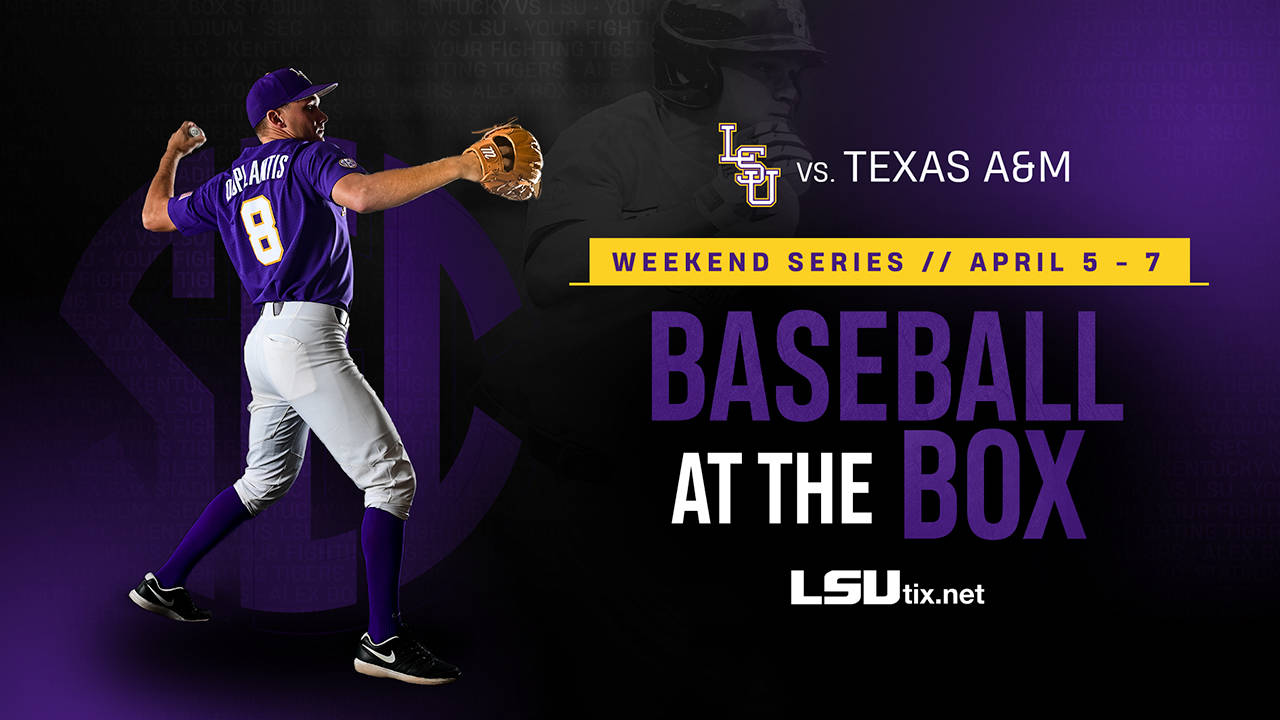 ** On Friday at 9:40 a.m., Sunday’s game was moved to Saturday at 2 p.m. CT due to forecast rain on Sunday. Game 23 tickets (originally scheduled for Sunday) may be used for the 2 p.m. game on Saturday.

ONLINE
All three games of the series will be available on the WatchESPN app.

SERIES RECORD VS. TEXAS A&M
• Texas A&M leads the series, 24-21-1, and the first meeting between the teams occurred in 1907 in Baton Rouge (a 3-2 LSU win). The Aggies have won three straight SEC series over LSU, including a 2-1 series victory last season in College Station. The Aggies have an 10-8 lead in the 18 games played between the schools since Texas A&M began playing baseball in the SEC in 2013. Eight of the 18 games have been decided by one run. This weekend’s series marks the Aggies’ third visit to Baton Rouge since joining the SEC – LSU won two of three in 2015, and Texas A&M won two of three in 2017 in Alex Box Stadium, Skip Bertman Field.

• Prior to 2013, the most recent meeting between the teams came in the 2004 NCAA Super Regional in Baton Rouge, as LSU swept two games to advance to the College World Series. One of LSU’s most famous matchups with Texas A&M came 30 years ago in May, 1989, when the Tigers defeated the top-ranked Aggies twice on the final day of the NCAA Central Regional in College Station to advance to the College World Series.

QUOTING PAUL MAINIERI
“We always look forward to playing Texas A&M because it’s great competition every year. It just seems like every time we play them it’s a very close game. It’s going to be a great challenge for our team this weekend, and it’s going to be fun facing the Aggies in our stadium. I coached two of their players – (pitcher) John Doxakis and (infielder) Braden Shewmake – over the summer with Team USA, so I’m very familiar with the high level of talent that Texas A&M has on its roster. ”

ABOUT THE TIGERS
• LSU is 6-3 in the Southeastern Conference after posting a 2-1 series win last weekend over second-ranked Mississippi State in Starkville … the Tigers are just a half-game behind first-place Texas A&M (6-2-1) in the SEC Western Division standings and just one game behind first-place Georgia (7-2) in the overall league race … LSU hit .303 (33-for-109) in the Mississippi State series with 26 runs, seven doubles and three homers
• LSU enters the Texas A&M series riding a four-game win streak, including two shutout victories this week over Grambling and South Alabama … the consecutive shutouts marked the first time the Tigers blanked teams in back-to-back games since the 2017 SEC Tournament, when LSU accomplished the feat against Kentucky and South Carolina
• LSU’s team ERA during the four-game win streak is 1.75, as the LSU staff has limited the opposition to just seven earned runs in 36 innings … LSU his hitting .309 as a team during the four-game win streak with 32 runs on 42 hits, seven doubles and three homers
• Senior rightfielder Antoine Duplantis has 308 career hits at LSU and has a chance to become the all-time hits leader in SEC history; former LSU first baseman Eddy Furniss is the all-time SEC hits leader with 352 from 1995-98 … Duplantis is No. 5 on the LSU career hits list, and he is just sixth LSU player to collect 300 career hits … Duplantis is two hits shy of tying Todd Walker (1992-94) for fourth place on the LSU career hits list … he batted .583 (7-for-12) last weekend at Mississippi State with two homers, two RBI and six runs scored … during LSU’s four-game win streak, Duplantis is hitting .529 (9-for-17) with two homers, three RBI and seven runs
• Senior third baseman Chris Reid was named SEC Co-Player of the Week on Monday after he led LSU to the series victory last weekend in Starkville, batting .750 (6-for-8) with one double, six RBI and four runs scored … Reid also walked three times and was hit by a pitch, recording a .769 on-base percentage in three games … in LSU’s 10-5 win on Friday night, Reid paced the Tigers’ 13-hit attack by going 3-for-4 at the plate with three RBI and three runs scored … in the Tigers’ 11-2, series-clinching win over Saturday, Reid provided two RBI with a double and a sacrifice fly, and he scored two runs … he was also 2-for-2 with an RBI in Thursday’s opening game of the series … Reid is batting .370 (10-for-27) in SEC games this season with two doubles and a team-best 11 RBI … he’s hitting .500 (6-for-12) during LSU’s four-game win streak with two doubles, six RBI and six runs
• Sophomore right-hander Eric Walker defeated Mississippi State last Saturday with a superb effort, blanking the Bulldogs in seven innings of work while allowing just four hits with two walks and three strikeouts … Saturday’s game was halted by rain in the top of the fifth inning for one hour, 19 minutes, but Walker returned to the mound after the delay to fire three more scoreless innings … Walker fired a total of 91 pitches in the outing, which was his longest of 2019 after missing all of last season due to Tommy John surgery on his elbow … he did not allow an extra-base hit, and only one Mississippi State runner advanced beyond first base

ABOUT THE AGGIES
• Texas A&M junior pitcher John Doxakis and junior infielder Braden Shewmake played for LSU coach Paul Mainieri over the summer when Mainieri served as head coach of the U.S. Collegiate National Team
• Shewmake is the Aggies’ leading hitter this season, batting .344 with six doubles, three triples, three homers, 31 RBI and 27 runs … he is No.3 in the SEC in base hits (44), and he’s first in the league in triples (3)
• Doxakis is eighth in the SEC in strikeouts (53) … Texas A&M sophomore left-hander Asa Lacy is first in the SEC in strikeouts (68) and seventh in the league in ERA (1.48) … the Aggies’ closer, right-hander Kasey Kalich, is second in the SEC with seven saves … Texas A&M has the league’s best team ERA (2.64)