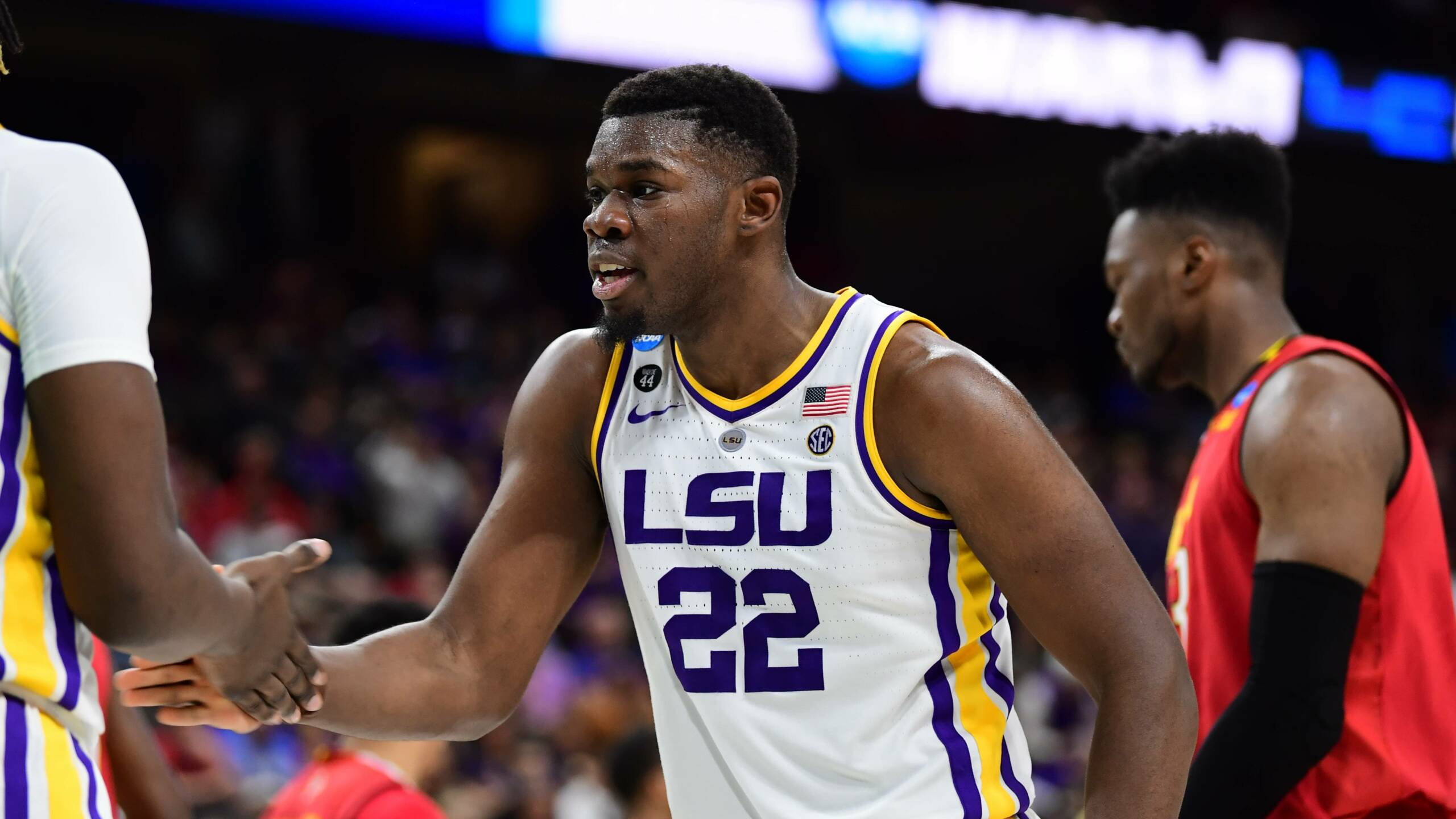 JACKSONVILLE, Fla. — It’s a motto that’s defined LSU’s season as much as anything.

Six words, fittingly enough, that tell the story of a team that continues to triumph in the face of adversity, that finds itself at its best with its back against the wall.

“They have five. We have six.”

It’s impossible to understand this LSU team, Sweet 16 bound for the first time since 2006 after a thrilling 69-67 win over Maryland on Saturday, without understanding the impact of Wayde Sims, killed in September the day the Tigers were set to begin practice for the season.

“The day he died was the day we were supposed to have our first official practice, so we had to get back to work within the week,” said Skylar Mays, Sims’ best friend since they were seven years old. “I’m still not over it. I don’t know if I’ll ever be over it. That’s my guy, man. I’ve been knowing him for 15-plus years. I just know that he’s with me and the reason we’re doing special things.

A patch of his number is on the right shoulder of every player. Fans, coaches, and players regularly hold up four fingers on each hand, as they did Saturday, when LSU went ahead 44-31 in the second half, or at the buzzer, when Tremont Waters laid in the game-winner. At each weight lifting session, the team finishes with a Sims set – 44 reps.

But his number pops up at other times, too. Like when an assistant coach dropped a box score and a pen earlier in the season, and the pen landed on the number 44.

Or when another assistant ordered a food item at a friend’s restaurant, and was given order No. 44.

Or when Mays played 44 minutes in LSU’s win over Tennessee earlier this season – a game he tied in regulation with two free throws sunk with 44 seconds to play.

Or when Marshall Graves, a high school teammate of Sims who now plays with Sims’ scholarship, hit a three-point shot in that two-point win over Tennessee. Or when Graves shot 4-of-9 from the field – 44 percent – in the Tigers’ SEC-title clinching win over Vanderbilt.

On Saturday, LSU’s sixth man was back at it again. LSU scored on 44 percent of its possessions against Maryland. Javonte Smart got his 44th steal of the season. The Tigers handed out 12 assists, improving their total on the season to 444.

“Wayde’s with us,” Mays said. “Wayde helped Tremont make that shot. Even though he makes them anyway, I feel like Wayde had something to do with that.”

Sims’ fingerprints are everywhere. Take Darius Days, for example. Against Vanderbilt, Days – who plays the same position, the 4, as Sims – hit four three-pointers in the PMAC.

The last player to hit four 3s against Vandy in the PMAC?

Who else but Sims?

“I know Wade is watching over us,” said acting head coach Tony Benford.

While 44 played the part of spiritual sixth man Saturday, Days led the charge from LSU’s bench, which proved vital in the win over the Terrapins. After going scoreless and firing up just one shot in the tournament opener against Yale, Days was determined to do more in the Round of 32.

“Yesterday, we had practice,” Days said after the game. “Going into practice, I was serious, I was trying to get my job done. I was trying to get a lot of shots up, get acquainted with the rim, the stadium, everything. The first game, I shot one shot, and it didn’t go in, so I was like, ‘What’s going on?’ I didn’t play as much, so I was kind of down, but I had to get myself up. I talked to the coaches. They said, ‘Your time is going to come. Just be ready.’”

The rest of the bunch was just as crucial. Smart scored 9 points, including a game-tying floater with 3:52 to go as the Tigers struggled with the Terrapin zone. Emmitt Williams scored 7 points, blocked a shot, and took a charge on Maryland center Bruno Fernando. The three bench players combined to finish plus-7 in 54 minutes.

Enough plays to reach a Sweet 16, where LSU continues its quest to bring 44 to the Final Four.

Or maybe it’s 44 who’s brought them this far.

“He’s the driving force,” Mays said. “We always try to bring attention to him. Wayde is who this is all about.”