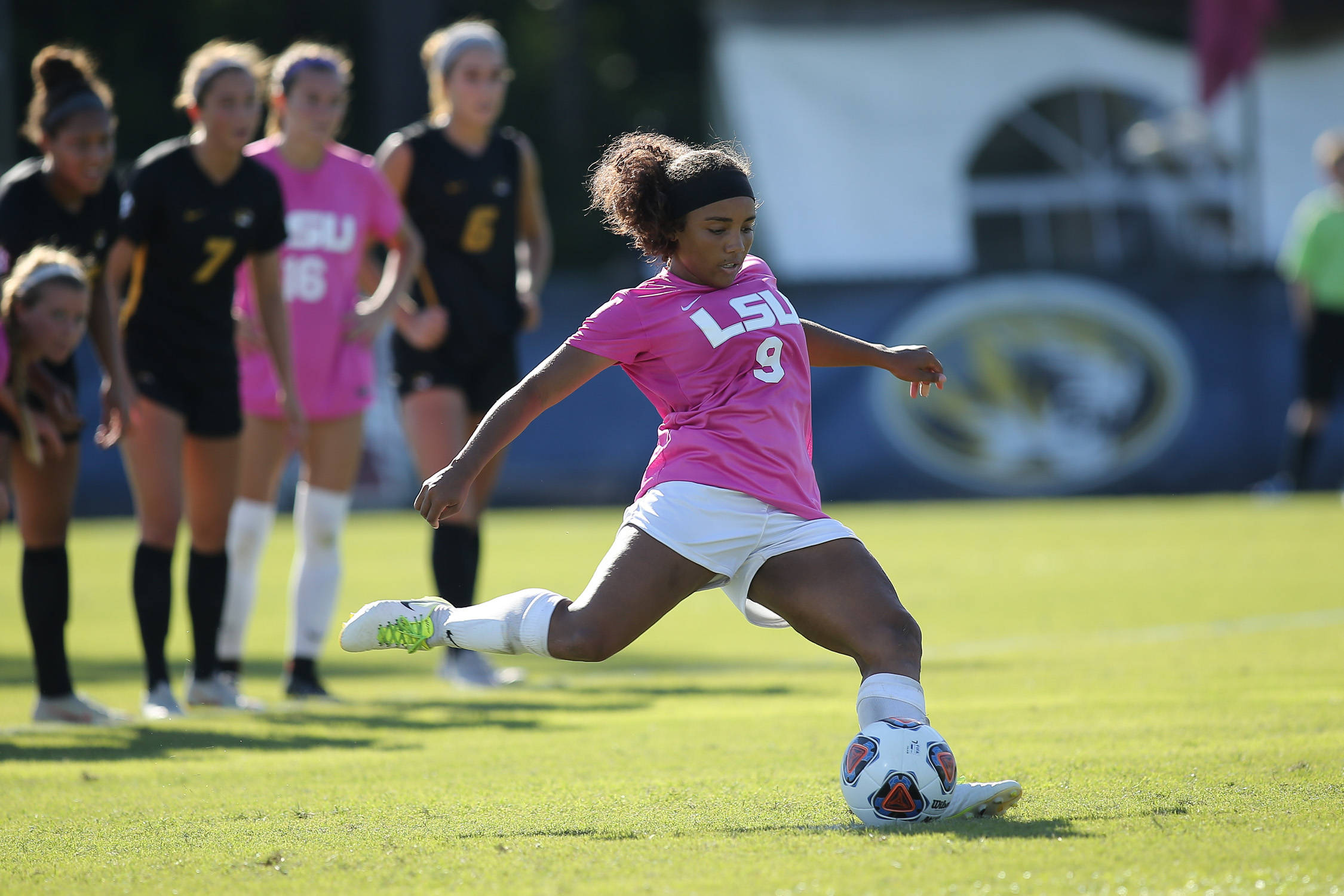 Orange Beach, Ala. – Senior Alex Thomas capped a hat trick with a 104th-minute penalty, as the seventh-seeded LSU soccer team defeated No. 10 seed Missouri, 3-2 in double overtime, in the opening round of the SEC Tournament on Sunday at the Orange Beach Sportsplex. The hat trick was the first ever by an LSU player at the SEC Tournament.

Thomas scored go-ahead goals in the fourth and 80th minutes, though Missouri answered each with goals in the 37th and 85th minutes to force extra time. LSU sophomore forward Adrienne Richardson was dragged down by the left arm in the penalty area by Missouri freshman forward Blythe Beldner, and Thomas put the deciding goal in the left corner of the net from the spot.

“Really happy with our effort, toughness, and our ability to grind it out and show good character there after their equalizer late to come back and get a winner.” – Head Coach Brian Lee

Thomas has now scored a goal or registered an assist in the last eight matches for a career-long streak. The senior from New Orleans has absolutely been on a tear as of late playing the best soccer of her career with 16 points (six goals and four assists) in the last eight matches. The hat trick was the first of her collegiate career and it couldn’t have come at a better time for LSU. Thomas now has a team leading 18 points in 2018, 16 of which have come in SEC play.

All 3⃣ goals from @alexxxmarieee9 this afternoon

The Tigers came out and blizted Missouri with a goal in the fourth minute of play. Tinaya Alexander picked up her team-leading sixth assist of the year on the first goal by Thomas. Taking over near midfield, Alexander headed a ball down and around a defender while she smoothly maneuvered her way around the defender herself. She then worked her way around two more Missouri defenders before she sent the cross across the box to Thomas who finished it off with a goal to the far post with her left foot.

Missouri answered back with a goal of their own in the 37th minute when freshman Julissa Cisneros scored one from 19 yards out to level things up. Missouri held the advantage throughout the game with 20 shots to LSU’s 13. Caroline Brockmeier was called upon and made five saves in the match.

With a little over 10 minutes left to play in the game, Thomas scored an absolute stunning goal with her left foot from just outside the 18. After a goal kick from Brockmeier, Thomas gained possession of the ball about 40 yards out and had a one on one with a Missouri defender. Thomas faced her up and deked her in to thinking that she was going to the end line before shifting her momentum and direction to the middle. The deke provided Thomas just enough room to get a left-footed shot off right as she entered the right side of the 18 and the ball beat the Missouri keeper to the far post to give LSU a one-goal lead.

A bit of an unlucky bounce in the 85th minute resulted in a handball in the box on LSU’s Chiara Ritchie-Williams and Missouri’s Cisneros notched her second goal of the game to push the match to overtime.

Missouri outshot LSU 5-2 in the first overtime, but the Tigers stood strong and carried the match into double overtime. A little over three minutes into the second overtime and Alexander found herself as the jump starter of LSU’s final goal. With plenty of room to work with she brought the ball over the midline on the right side of the pitch before connecting with Chrissy Pitre on a well-played give and go. Alexander sent in a ground cross that Marlena Cutura smartly let go through deeper into the middle of the box. Thomas was the first Tiger to almost possess the ball but she was knocked down by a Missouri defender. The loose ball then caromed to Richardson who was pulled down in the box to give LSU the penalty kick. Thomas took the penalty with a calmness and slammed it home in the 104th minute for the hat trick and game winner. It was the fifth penalty score of Thomas’ career which ranks as the second most in LSU history. It was the 22nd hat trick in LSU history and the first since Jorian Baucom accomplished the feat in 2016.

“It means the 🌎 to me.” – @alexxxmarieee9 after her first career hat trick that sent LSU to the quarterfinals.#GeauxTigers pic.twitter.com/pIccT3mS6E

LSU (12-6-1) advanced to the quarterfinal round and will face 12th-ranked and No. 2-seeded Tennessee at 12 p.m. CT on Tuesday and the game will air on the SEC Network.