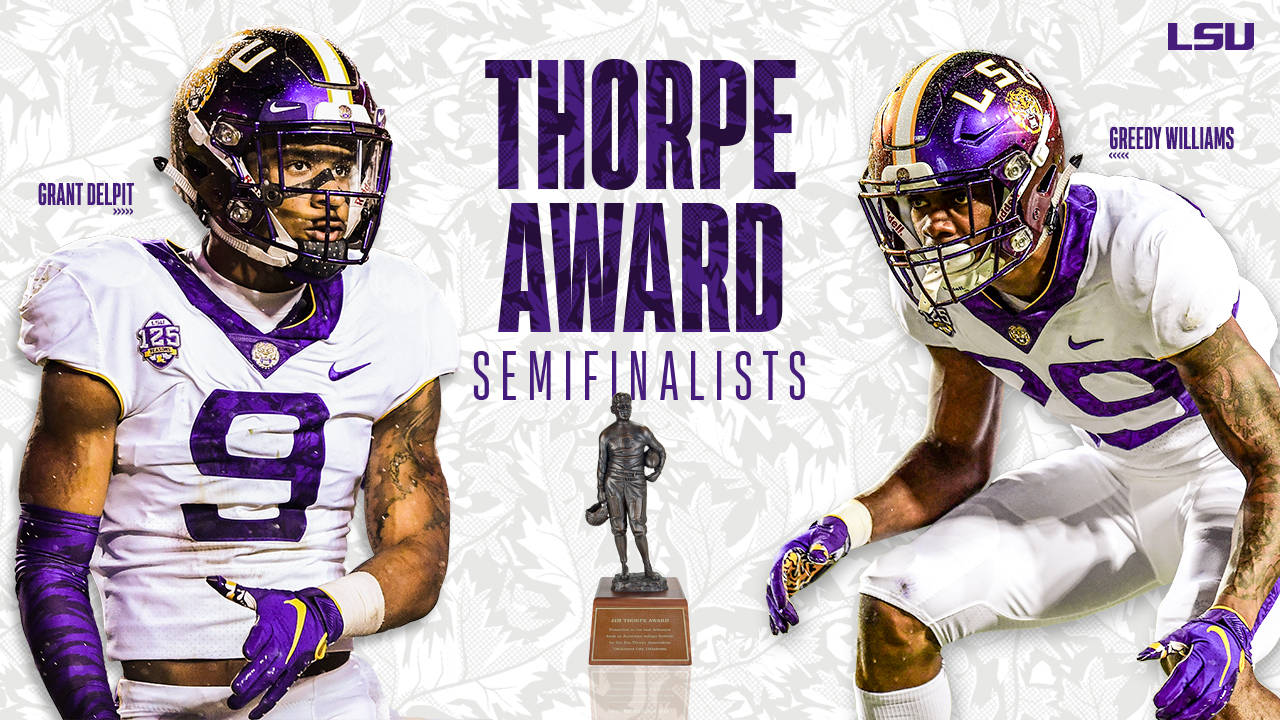 BATON ROUGE – LSU’s Grant Delpit and Greedy Williams are among 14 semifinalists for the prestigious Jim Thorpe Award given to the nation’s best defensive back, the award announced on Monday.

Delpit, a safety and Williams, a cornerback, are two of three players on the list from the Southeastern Conference as they are joined by Georgia cornerback DeAndre Baker.

Delpit and Williams, both sophomores, have been catalysts for an LSU defense that leads the nation in interceptions with 14. The Tigers also lead the SEC and rank No. 6 nationally in pass efficiency defense with a 98.28 rating. In eight games, the Tigers are allowing only 15.1 points per game, which ranks No. 3 in the SEC and seventh nationally.

Individually, Delpit leads LSU in tackles for loss with 8.5 and is tied for team-high honors in sacks with four. His five interceptions rank first in the nation. Delpit is coming off a 10-tackle, 2-interception, 1-sack game in LSU’s win over Mississippi State. He was named SEC Defensive Player of the Week for his performance in the win over the 22nd-ranked Bulldogs.

Williams, considered one of the top cover corners in college football, has 23 tackles, four pass breakups and two interceptions to his credit.

Both Delpit and Williams were named as Midseason All-Americas last week by numerous publications, including The Athletic, ESPN, Sports Illustrated and the Associated Press, furthering LSU’s claim as “DBU”.

Delpit and Williams are looking to join former LSU standouts Patrick Peterson (2010) and Morris Claiborne (2011) as winners of the award.

The Jim Thorpe Award is one of the most coveted awards in college football, given to the best defensive back in college football based on performance on the field, athletic ability and character. The award was established in 1986 and is named after history’s greatest all-around athlete, Jim Thorpe.

Thorpe excelled as a running back, passer and kicker on the offensive side of the ball, but also stood out as a defensive back. In addition to his legendary performance on the football field, Thorpe played professional baseball and won Olympic gold medals in the decathlon and pentathlon. The Jim Thorpe Award Winner is selected from three finalists and will be announced at The Home Depot College Football Awards on Thursday, December 6, 2018, on ESPN. The Jim Thorpe Award Banquet will be held on Tuesday, February 5, 2019, in Oklahoma City, Oklahoma.