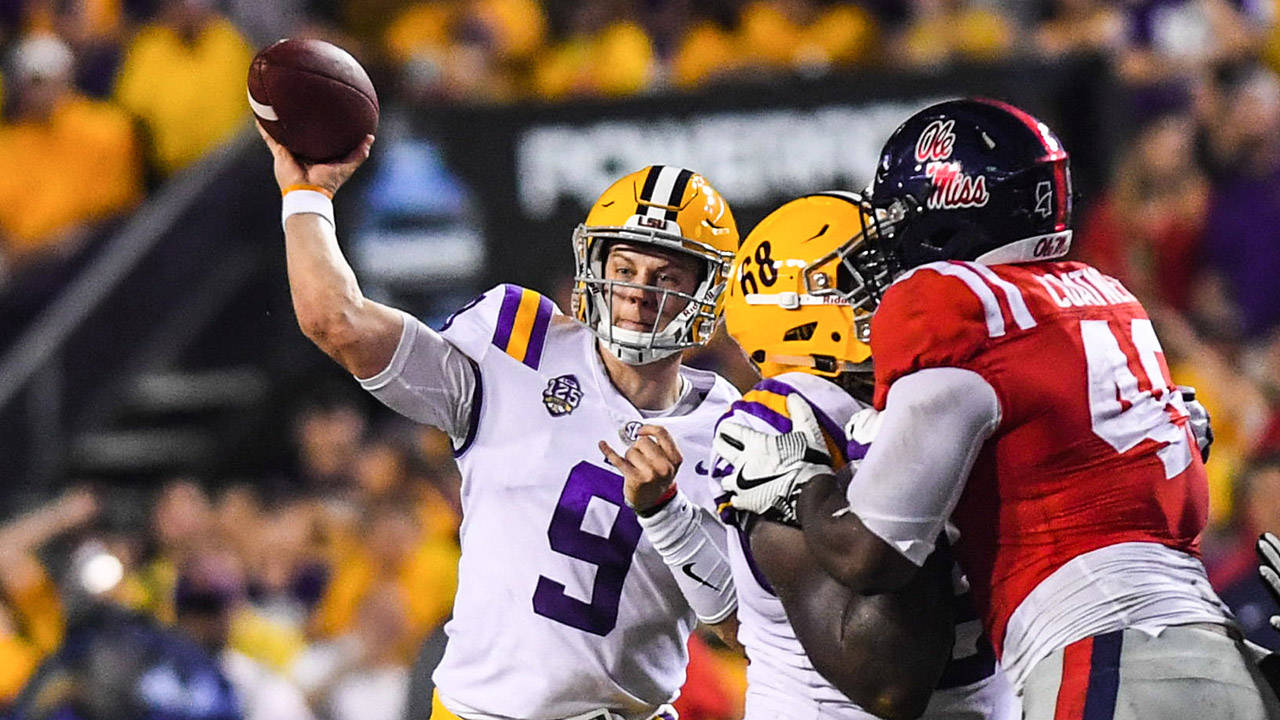 BATON ROUGE — Fifth-ranked LSU rolled up 573 yards of total offense – 292 through the air and 281 on the ground – in a 45-16 victory over Ole Miss on a rainy Saturday night in Tiger Stadium.

LSU (5-0, 2-0 SEC) was led by quarterback Joe Burrow, who was 18-of-25 passing with three touchdowns while running for a team-best 96 yards and a touchdown.

Burrow connected with nine different receivers including wide receiver Justin Jefferson who had a team-high five catches for 99 yards with touchdowns of 65 and 5 yards. Stephen Sullivan added five catches for 50 yards while Racey McMath had his first two career catches for 42 yards.

Along with Burrow’s 96 net yards rushing, running back Nick Brossette had 72 net yards with a 4-yard touchdown run late in the first quarter that put the Tiger ahead, 14-3. Clyde Edwards-Helaire added 67 net yards on 11 carries with a 3-yard touchdown run midway through the second quarter.

Though the Tigers’ offensive line got a boot with the return of tackle Adrian Magee, LSU started its fifth different combination in as many games. Sophomore Donavaughn Campbell earned his first start at left guard in place of an injured Garrett Brumfield.

Defensively, LSU held the Rebels in check throughout the contest, beginning with a diving interception by safety Grant Delpit on Ole Miss’ second play from scrimmage. Cornerrback Greedy Williams led the Tigers with 10 tackles, while Delpit had five including 2.5 behind the line of scrimmage. Linebackers Devin White and Jacob Phillips collected six tackles each.

The Tigers return to action on Saturday, Oct. 6, when traveling to Gainesville for face Florida. Kickoff is set for 2:30 p.m. CT on CBS, with pregame on the LSU Sports Radio Network beginning at 12:30 p.m.

Rebels quarterback Jordan Ta’amu was 19-of-38 passing for 178 yards. Ole Miss running back Scottie Phillips ran 16 times for 96 net yards with a 1-yard touchdown run late in the third quarter.

After the missed three-pointer, Ole Miss moved 52 yards in nine plays and grabbed a 3-0 lead when Luke Logan connected on a 30-yard field goal with 9:06 remaining in the first quarter.

LSU responded quickly when quarterback Joe Burrow hit wide receiver Ja’Marr Chase on a 21-yard TD pass to complete a six-play, 81-yard march. The score gave the Tigers a 7-3 advantage at the 5:59 mark of the first period.

After a three-and-out for the Ole Miss offense, LSU again shredded the Rebels’ defense to increase the margin to 14-3. The Tigers completed a nine-play, 71-yard drive with a four-yard touchdown burst by running back Nick Brossette at the 0:57 mark of the first quarter.

The LSU defense forced another three-and-out, and the Tigers drove 83 yards on 12 plays with running back Clyde Edwards-Helaire finishing the march on a three-yard touchdown dash from the Wildcat formation.

The Tigers increased the lead to 28-3 with 7:41 left in the first half when Burrow hit a streaking Justin Jefferson across the middle, and the wide receiver sprinted down the sideline to complete a 65-yard TD play.

Logan hit a 17-yard field goal for the Rebels with two seconds left in the first half, sending the teams to the locker room at halftime with LSU holding a 28-6 lead. The three-pointer culminated a 12-play, 90-yard drive by Ole Miss.

Ole Miss reduced its deficit to 28-13 with 3:45 left in the third quarter when running back Scottie Phillips barreled over the goal line from one yard out, completing a 13-play, 59-yard drive.

The Tigers roared back, taking just 1:48 to move 67 yards in five plays, completing the possession on a five-yard TD strike from Burrow to Jefferson on third-and-goal. The key play in the march was a Burrow 52-yard completion to Terrace Marshall that advanced the ball to the Rebels’ 10-yard line.

LSU again responded rapidly, moving 67 yards on 10 plays before Tracy connected on a 26-yard field goal with 8:45 left in the game.

Burrow capped off the scoring with a 35-yard bootleg touchdown run with 2:56 to play.

“First thing was the outcome of the game, five and 0. Total team effort. Give Ole Miss credit. I thought Coach (Matt) Luke did a great job for his team. They were never out of the game. They kept on fighting, kept on fighting. We couldn’t put them away. It was a tough game, but we knew it was going to be a tough game. I’m excited about our football team, excited about the player Joe Burrow tonight, excited to play some offensive lineman. Donavaughn Campbell, I thought played a really good game for the first time. Adrian Magee, he came back hurt, did a good job. We ran the ball. I thought Coach (Steve) Ensminger called a great game tonight. He dialed it up. He used (Justin) Jefferson. I thought overall offensively we had a great night. On defense we struggled a little bit. I’m disappointed in our minus-one turnover margin. We’re going to get that fixed. That was two critical turnovers in the red zone, and it’s unlike us, so we’re going to fix it.”

On if Coach Orgeron intended on spreading the ball around…

We’re trying to figure it out. We were really demonstrative at half time, if that’s a good word to say. Making sure that we’re coming out fired up, but we still didn’t do the things that we needed to do. You gotta win the game in four quarters and we’re winning the game. So, we’re going to fix the third quarter. That’s the least of my problems right now.”