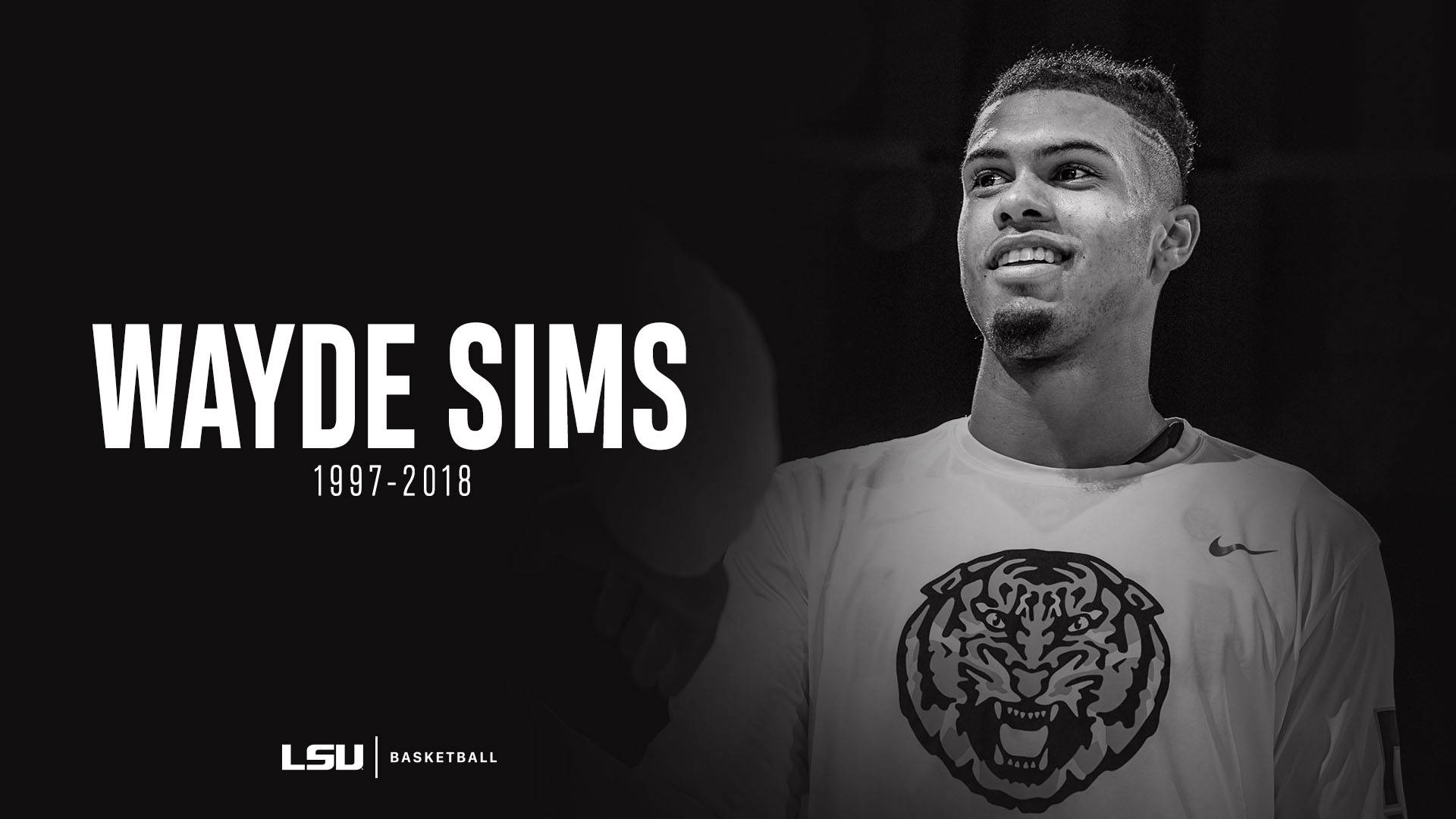 “We are all devastated, “said head coach Will Wade. “We need your prayers for Wayde, for his family, for all of us. We are heartbroken.”

LSU officials were notified of Sims’ passing early Friday morning. Counselors and support have been made immediately available to teammates and friends at LSU.

“Wayde Sims‘ loss is simply unbelievable to us right now,” said vice chancellor and director of athletics Joe Alleva. “There are no words that can express our sorrow for his parents and family. He was such a lovable young man who was full of joy. We are circling around his teammates and friends who need all the love and support we can give them. We are praying for his family, for his parents. God bless Wayde Sims.”

“We are stunned and shaken,” LSU President F. King Alexander said. “To say we are grief-stricken is an understatement. Wayde was a beloved member of the LSU community whose leadership was treasured by his coach and his teammates. I knew him personally and liked him tremendously. The void left by his passing will be immense, and we ask that you keep his family in your prayers.”

Sims, who came to LSU from University High School, played in 63 games in his two years at LSU, starting a total of 15 (10 this past year). He averaged 6.5 points as a freshman and 5.6 points as a sophomore with 29 assists and 35 blocks.

His only double double of his career came against Sam Houston (12/19) with 10 points and 10 rebounds in 20 minutes. His high scoring game came in the Maravich Center on Feb. 20, 2018 when he was 6-of-6 from the field (1 trey) and 3-of-4 from the line for 16 points in 30 minutes in a starting role. His rebound high came the year before as a freshman when he had 11 rebounds versus South Carolina.

LSU asks for patience and privacy for the family in this regard.

Update (Sept. 29, 5 p.m. CT): Funeral services have been schedueled for Saturday, Oct. 6, at Healing Place Church (19202 Highland Road, Baton Rouge). Visitation will start at 9 a.m. followed by the service at noon. The ceremony may be viewed here.

“He loved @LSU and Baton Rouge. He loved everything about this program … We want to remember Wayde and what a great person he was. He had an unbelievable spirit to him and everybody was drawn to him.”
– @wwadelsu pic.twitter.com/Uhnss50WRQ

Coach Wade and Vice-Chancellor/Director of Athletics Alleva met with the media at mid-morning.

Here is the transcript:

Opening Statement …
“Obviously, early this morning you got the call that you never want to get as a head coach. We rushed down to the hospital, and they let us know of the news on Wayde (Sims) when we got to the hospital. From there, our concern was with Fay and Wayne, his parents. We spent the majority of the morning with them. We transitioned to our team as we had a scheduled 6:30 a.m. workout this morning. We brought the team together at 6:30 a.m. and shared the news with them. We had our entire staff, our entire administrative staff. We had counselors on hand for the 6:30 a.m. meeting with the team. We just informed them and kind of started the grieving process with our players at that time at 6:30 a.m. It is obviously a tough day, but it’s one of those days where we want to remember Wayde and what a great person he was beside the fact that he had the best impression of me on the team. He was just an unbelievable person and was continuing to grow and had just done a great job building a bridge with our team. That’s what just makes it so tough for all of us and for our team as well. Everybody liked him. Anybody he came in contact with, you automatically just loved him and loved his personality. He was just a blast to be around at all times. We are all still devastated and in shock about everything. We are going to support Wayde’s family, and we are going to support our guys and slowly move forward from this. It’s been amazing just in the short time how the—everyone talks about the LSU family and that sort of thing. You can see that when things are tough and when things are hard, the outpouring of support early this morning at the hospital was unbelievable for his family and our program. Obviously, the outpouring of support for our players and the support mechanisms that were put in place so quickly this morning was just great. We are still hearing from people all of the time just reaching out and offering their condolences and their support moving forward.”

On what kind of man Wayde Sims was …
“Everyone on the team loved him. He was the team jokester and prankster, always had a smile and bopping around. He got us going in practice. He’d do anything for anybody on our team. He’s one of the few people that was on our team that was always driving guys around, driving guys back and forth to Wal-Mart if they needed to make a trip. He’d do anything for anybody. He helped all of the other guys move in because he was able to move in early. He was just a phenomenal guy. On Wednesday, we did a high ropes course, and we had some guys who were scared of heights. He’s not scared of heights. He could have done it without the ropes on. He’s up there hanging around and joking around with everybody. He had just an unbelievable spirit to him, and everybody who was around him was drawn to him.”

On Sims being from Baton Rouge and his love for LSU…
“There were no other options for him. His father played here. He went to high school here. He loved LSU. He loved Baton Rouge. He had a Tiger tattooed on his arm. He had ‘225’ on his arm. He just loved everything about it. We did a thing last year with our team when we showed baby pictures or pictures when guys were younger and there’s pictures of him in purple and gold overalls with the stripes on them. He just absolutely loved LSU and Baton Rouge.”

On how Sims helped the program transition when Will Wade was announced head coach…
“He’s one of those guys that everybody likes and everybody liked. He has a way about him where if you’re around him, you feel engaged with him, and I just love him. He embraced us from the start, and we embraced him. He was just growing and growing and growing. That’s what’s so tough. He was on an upward trajectory, big time upward trajectory. It’s tough when it’s taken too soon.”

On where his focus and the team’s focus is now…
“We started the process this morning, and we’re not going to worry about basketball right now. We’ve got a lot bigger issues than basketball. Everybody grieves differently. It takes people different amounts of time for this sort of thing. We started the process this morning, and we’re going to continue it for as long as we need. All we can do now is focus on helping Wayde’s family and being there for Wayde’s family and then being there for our players and making sure that they’re well taken care of. Like I said, we started the counseling this morning, and you know, it’s going to be a process. We’ll handle it as we move forward. We just take it a second at a time, a minute at a time, an hour at a time, a day at a time. Right now, we just want to get through today and we’ll see what tomorrow brings.”

On what have led to what happened last night…
“I don’t know a whole lot about the details at this time.”

On the dangers young people face today and what the message of this is…
“This is your worst nightmare as a coach. This is what you worry about at all times. There are problems everywhere. You just want to educate your guys as best as possible to stay away from those situations. Unfortunately, sometimes these lessons are the toughest.”

Opening Statement …
“This world that we live in of athletics has its ups and its downs. There are no lower downs than what happened last night. It was an absolute—it is an absolute tragedy when a young life gets cut off so senselessly. I’ve been doing this for over 40 years, and this may be the saddest day that I’ve ever experienced in my career. I personally knew him. I saw him so many times on campus and in the weight room, just a wonderful young man with a great smile and a great spirit. It’s just so senseless and tragic that it has to come to this, but like Coach said, we are going to do everything we can for his family and for the team, provide counseling. Like I told the team this morning, this is a day they will never forget. They will never forget this day. It will live with them forever, and we are going to deal with it the best that we can as we go forward. The LSU family will bond together even stronger than ever and support these young men and their family as we go forward.”

On how this extends past the basketball team into the athletic department and the entire LSU campus…
“Wayde grew up in Baton Rouge and knew a lot of people, not just on the basketball team. His footprint permeates the whole campus. It even goes down to U-High. There are still kids at U-High that knew Wayde. This is a terrible experience for everyone, but at the end of the day, we need to make it a learning experience also. That our athletes are out there and they have to be careful everywhere they go. During this grieving process, it will permeate the whole campus, and not just our athletic teams.”