Beyer Finds Home Away From Home at LSU 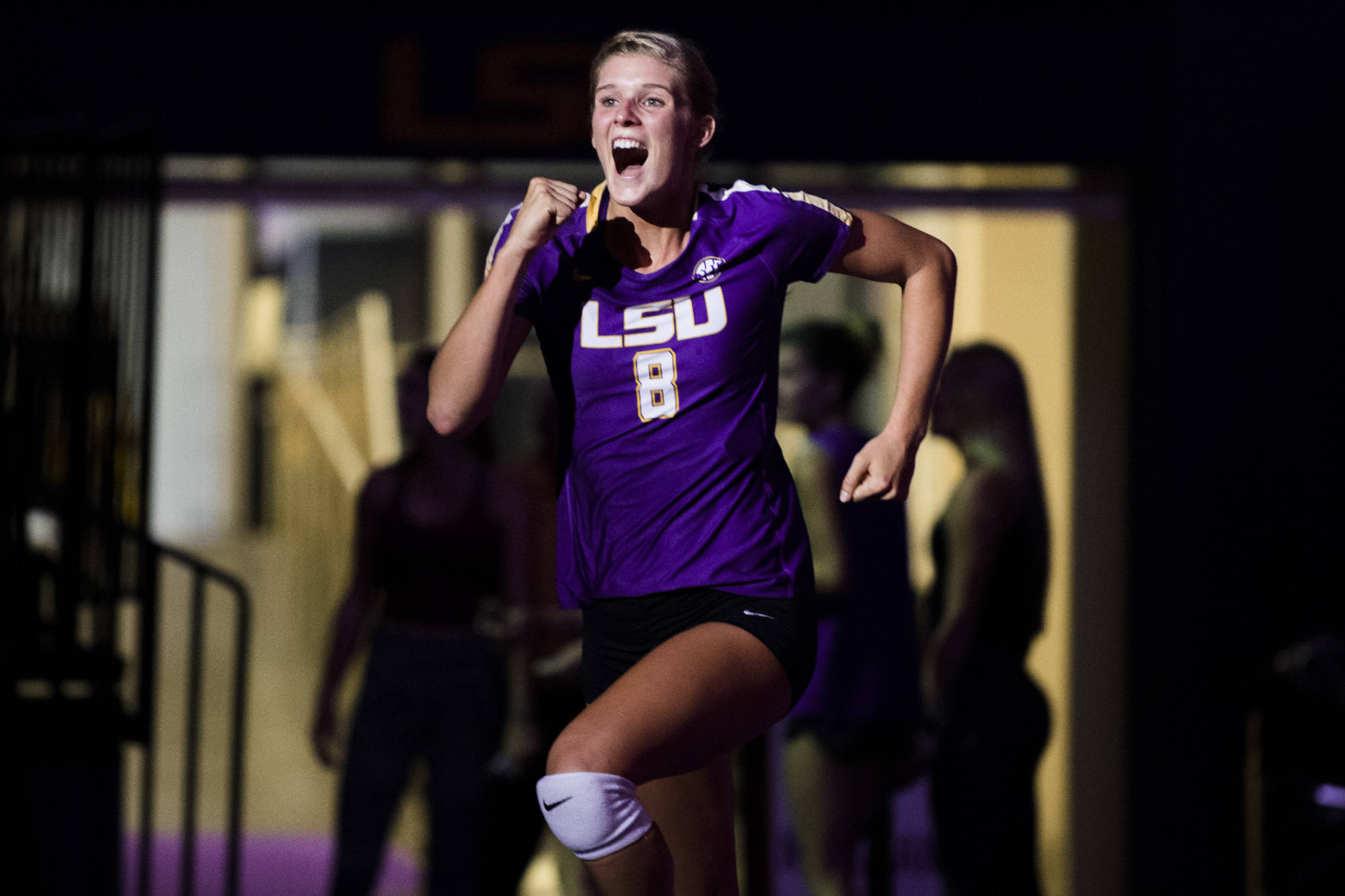 This is why going back to her home state of Michigan in early September with her fellow teammates was nothing short of exciting, and not even an injury could get in the way of that.

However, her chances of playing in the Michigan Classic were very slim. Beyer still packed her shoes—just in case.

The last time the senior middle blocker for LSU’s volleyball team saw her entire family was Christmas of last year. Other than that, she randomly saw some of them during the summer between classes, but not everyone was together.

“I was home for very little, so I’ve been really feeling that distance,” Beyer says. “They’re like my best friends.”

Beyer grew up with two older sisters who both played volleyball and an older brother who played football for University of Michigan. Needless to say, athleticism is in her blood.

It was in fifth grade when Beyer started playing volleyball; however, she knew she wanted to play much earlier.

She originally played basketball and soccer, but switched over to volleyball because it was more exciting, and most importantly, her sisters did not play the other two sports.

When Beyer first started playing volleyball in middle school, she says she did not even think about the possibility of playing in college. It was not until one of her club team coaches told her she had potential to play at a collegiate level that it crossed her mind.

“That just blew my mind because I didn’t even think that was in the realm of possibilities,” Beyer says.

Hearing that from her coach made her even more excited about the sport, and it also motivated her.

“I was like six-feet tall in sixth grade,” she says, “so you would think that I should’ve known it was possible.”

After a few high school years, adding some purple and gold attire to her wardrobe and a big move down to Baton Rouge, Beyer began practicing and playing everyday in the Pete Maravich Assembly Center with her new Tiger family.

“I was so excited to be able to represent LSU,” she says. “I didn’t know a ton about the school, but after my first visit I knew I would love it.”

Beyer consistently shows big moves on the court season after season. However, after suffering a minor injury during the Tiger Classic held at LSU, she was unable to play in Michigan. Beyer did not let her sprained ankle ruin her time with family or stop her from cheering on her team.

“I was so excited that I was even able to still go because there was zero chances of me playing,” she says.

Getting to see her entire family, which almost never happens, and cheer on her teammates from the bench was a great experience for Beyer, and she said she even learned a few lessons from the injury.

“Even when I don’t play, I can have an impact on the team,” she says. Things that Beyer’s coaches have told her before that she did not quite understand became clearer, and she was able to reflect on herself and get lots of rest.

Beyer said that her teammates texted her everyday to check on her and that they truly wanted her to get better.

“Yes, I wanted to play, everyone wants to play,” she says, “but I’m not going to argue with God’s timing because His plan is way better than my own.”

Beyer and her family enjoyed their time together at the hotel where they caught up with each other through conversations and lots of pizza. She also enjoyed seeing her brother wear an LSU tank top and other purple and gold gear.

“That was a nice sight,” she says.

That family time and rest did Beyer some good. One week later, she was back on the court in Dallas where the Tigers won both matches in the SMU Doubletree Classic. Beyer finished with a season-high in kills against SMU.

As far as team goals go for the season, “we want to win the SEC,” Beyer says. She would also like to beat senioritis and maintain her current academic standing.

Beyer said she never thought it was going to get easy because it’s been so hard for her, but this year, it became easy. She said she’s just enjoying playing the game of volleyball and being with such a special group of girls.

“I’m going to miss being in the gym with my family every single day,” she says. “I’ll miss feeling like I can’t do something and getting so frustrated, but the next day I can do it with my team right behind me.

LSU has definitely challenged Beyer from academics all the way to who she is as a person. She says her coach, Fran Flory, is really invested in each of the players’ lives beyond volleyball, and has helped her become a successful person.

“Character building is a huge part of what LSU is,” she says, “and a family in Louisiana. It’s almost like leaving my family again.”