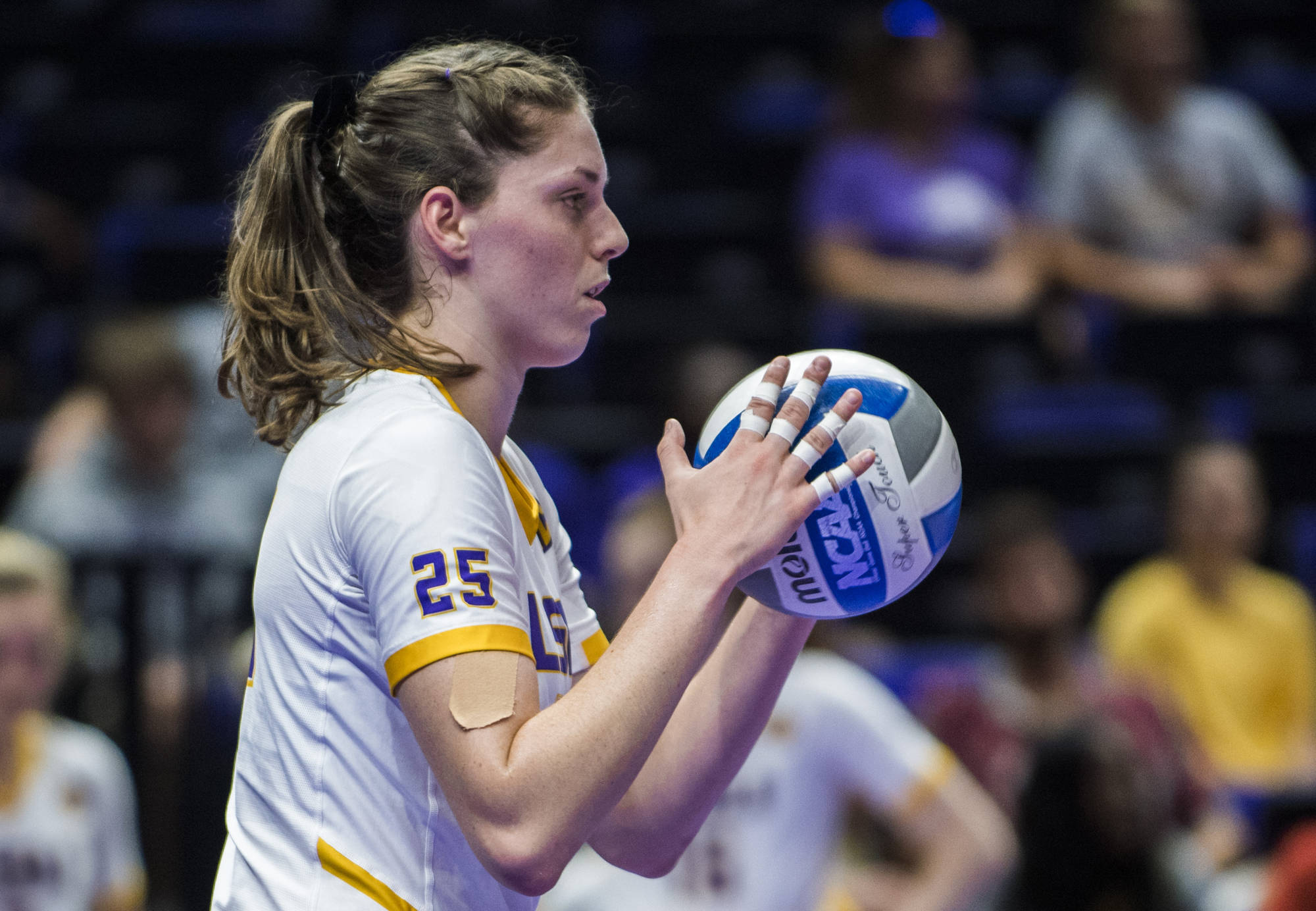 Toni Rodriguez always imagined wearing the purple and gold and taking the floor in the Pete Maravich Assembly Center.

But, at first, the senior outside hitter for LSU’s volleyball team had a different sport in mind.

Basketball was Rodriguez’s first love, but after a change of sport, a change in destination, and a pair of injuries, she knows as well as anyone that things don’t always go according to plan.

In her case, the reality eventually far surpassed the dream – after a few twists and turns.

“Everything happens for a reason,” Rodriguez says.

During summer workouts of her freshman year at St. Amant High School, the school’s volleyball coach approached Rodriguez and could not believe that she was six feet tall and not on the volleyball team. The coach invited her to a practice, which Rodriguez attended, and from that day forward, she continued to play.

“I think the first game I played in I blocked the serve,” Rodriguez says. “You can’t do that in volleyball, so that was a little embarrassing, but I’m sure I had a blast.”

Rodriguez was invited to play at USA Volleyball High Performance in Arizona in the summer after her sophomore year where she tried out and made a team. She played there for 10 days.

“It was one of the most amazing experiences ever,” she says. Rodriguez says that seeing and playing alongside talented volleyball players made her want to continue to play for as long as she could.

“I literally fell in love with it,” she says.

During a huge game against Mount Carmel Academy her senior year, the team that LSU senior defensive specialist Katie Kampen played for, Rodriguez suffered another knee injury that cost her the rest of her senior season.

“I just remember going up, coming down, turning off the net and then, ‘Boom!’” she says. “I was just on the ground.”

Rodriguez says she remembers being rushed to the training room where Kampen, her opponent at the time, met her after leaving the game to make sure Rodriguez was okay.

“In the moment, I guess I was kind of scared that I wasn’t going to be able to play again,” she says. However, with the help of her support system, Rodriguez knew she could get through it and continue to play if she rehabbed correctly.

Rodriguez originally committed to Tennessee to play volleyball, but following her injury, Tennessee pulled her scholarship.

“Honestly, it was probably the best thing that could have happened because I absolutely love it here at LSU,” she says. “I think if I wouldn’t have gotten hurt, I wouldn’t have liked it.” Rodriguez says she loves her teammates and her coach here at LSU. Her grandparents also love coming to watch her since it is so close to home.

“It just all worked out for the best,” she says.

After her scholarship was pulled, Rodriguez called Coach Fran Flory, who opened up her arms to Rodriguez and allowed her to walk on the team.

“Just by that first initial call and visit, I just knew that this was going to be the right school,” she says.

Rodriguez redshirted her first year at LSU because she says she was not physically ready to play in college, but she came in strong her freshman season as a Tiger, finishing third on the team in kills.

The 6-foot-1 outside hitter has certainly grown in her time as a Tiger. She finished her undergraduate degree in three-and-a-half years and is now pursuing a master’s degree.

“LSU has not only provided me with several athletic opportunities, but also academic,” she says. “I’m super thankful for my teammates, my coaches and my parents because they’ve done a lot for me. I absolutely love it here and this is home.”

Rodriguez’s senior season will kick off this Friday when the Tigers take on Baylor in Waco, Texas. An SEC Championship and run at the national championship would “top off” her career at LSU, but most of all, leaving her print on the program is her ultimate goal.