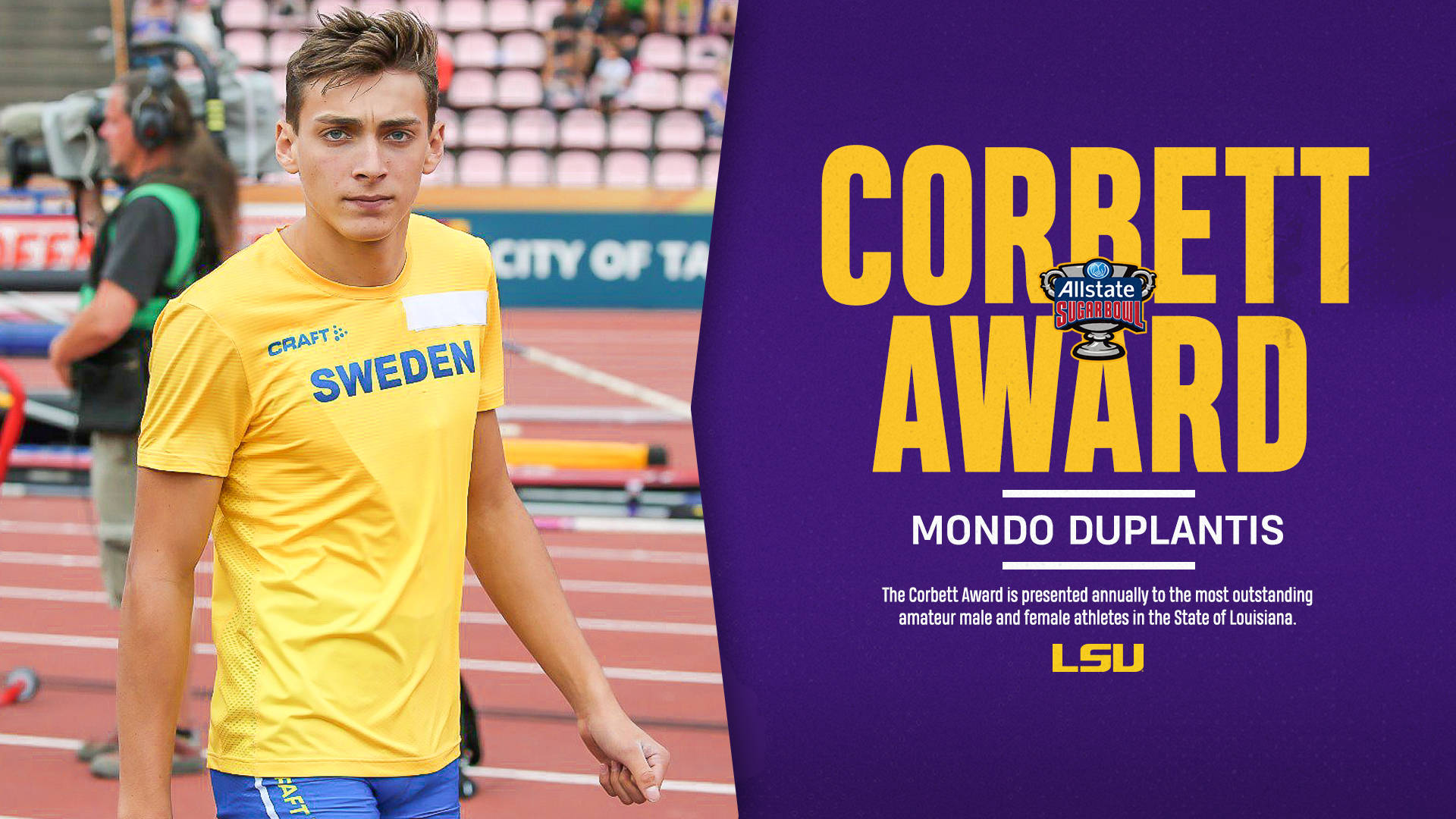 Baton Rouge, La. – Mondo Duplantis was named the 2017-18 recipient of the Allstate Sugar Bowl’s Corbett Award on Friday afternoon. The Corbett Award is presented to the most outstanding amateur male and female athletes in Louisiana each year.

Duplantis will be presented with the Corbett Award on Aug. 4 as part of the Greater New Orleans Sports Hall of Fame Banquet at the Mercedes-Benz Superdome. Duplantis becomes only the second amateur athlete to win the Corbett Award while still in high school; he joins the likes of two-time Corbett Award winner Leonard Fournette, who won his inaugural Corbett Award in 2014 after one of the most heralded high school careers at St. Augustine High School.

An incoming freshman on the LSU track and field team, Duplantis has soared to heights that no other U20 athlete in world history has ever cleared in the pole vault. Over the last two years, Duplantis has recorded the top 13 pole vault clearances in world junior history with a career-best mark of 5.93 meters (19-5.50).

Competing in the friendly confines of the Bernie Moore Track and Field Stadium in early May, Duplantis wowed the crowd with his world junior record performance of 5.93 meters (19-5.50) at the final high school meet of his illustrious prep career to win the state title in the pole vault while representing Lafayette High School. More recently, Duplantis won his second-career world title with a clearance of 5.82 meters (19-1.00) in mid-July at the 2018 IAAF U20 World Championships.

Although he has retained his amateur status, he’s already making waves on the professional circuit this summer. Duplantis claimed his first-career win on the Diamond League circuit with a 5.86 meter (19-2.75) clearance in Stockholm in early June. The rest of his summer on the professional Diamond League schedule has been successful as well with a second-place showing in Paris to go along with a third-place finish in London and a fifth place in Lausanne.

His mark of 5.93 meters (19-5.50) that he cleared at the LHSAA State Championships in May is the third-best clearance in the world for 2018. The Corbett Award was created in 1967 and named in honor of the late James J. Corbett to commemorate his many contributions to intercollegiate athletics and specifically the Sugar Bowl. At the time of his death, Mr. Corbett was the Athletic Director at LSU. These awards are presented annually to the most outstanding amateur male and female athletes in the state of Louisiana. The Corbett recipients are selected each year by members of the New Orleans Sports Hall of Fame Committee.

A full list of Corbett award winners can be found here.