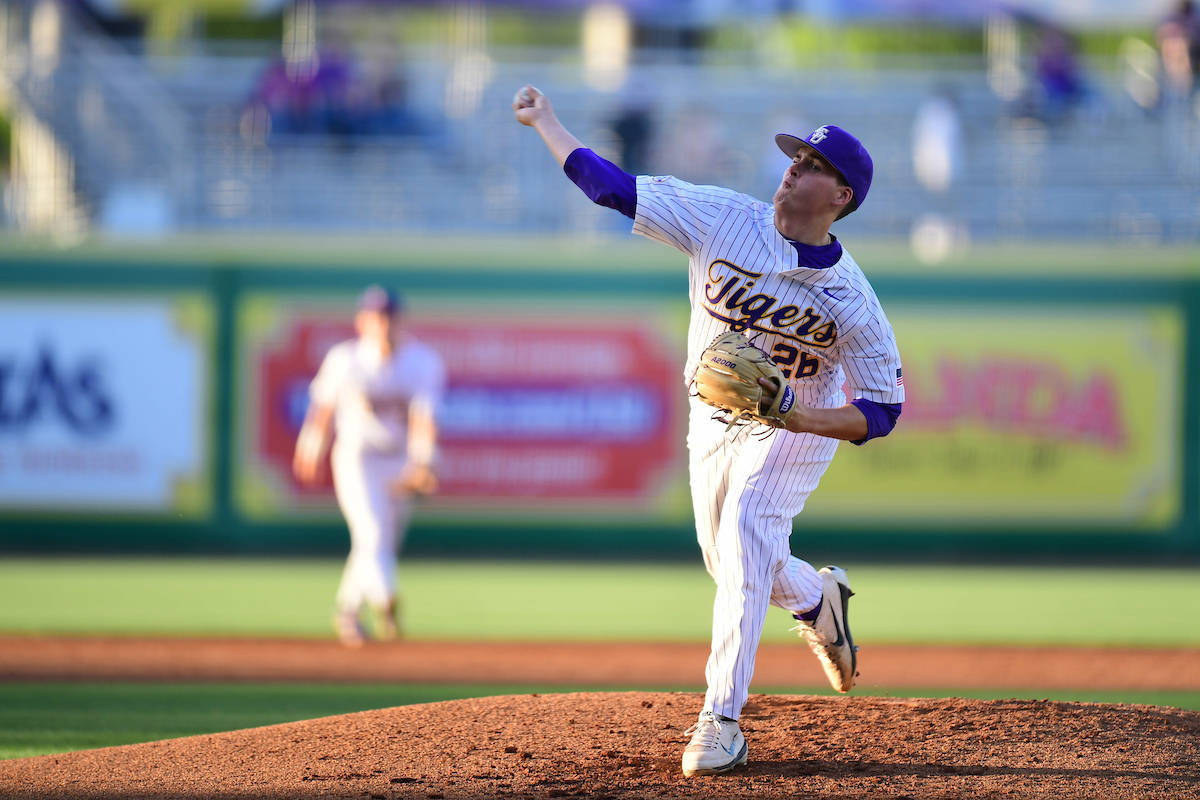 Labas’ gem marked the first nine-inning complete-game shutout by an LSU pitcher since Alex Lange blanked Auburn on May 11 of last season. Labas became the first LSU pitcher to record a shutout in a midweek non-conference game since May 17, 2011, when Tyler Jones accomplished the feat at New Orleans.

Sophomore Josh Smith, who has been out of action since February 18 due to a back injury, returned to the LSU lineup Tuesday night, going 2-for-3 and launching his second home run of the season.

Labas (5-1) was brilliant on the mound, scattering six hits while recording one walk and nine strikeouts. He threw 103 pitches in the outing.

“I was so happy for AJ,” said LSU coach Paul Mainieri. “Tonight was one of those nights when he was in a groove, he was making pitches the way he needed to. It was really just a tremendous performance. He pitched with an awful lot of confidence, and our defense was superb behind him.”

Lamar starter Jace Campbell (1-7) was charged with the loss, as he worked 6.2 innings and allowed four hits and three earned runs with three walks an dfour strikeouts.

With LSU second baseman Brandt Broussard on first base in the third inning, third baseman Smith got his first hit back in the lineup after a nine-week hiatus due to injury, putting runners on first and third with one out. A sacrifice fly off the bat of rightfielder Antoine Duplantis scored Broussard and gave the Tigers a 1-0 lead.

To begin the fourth inning, the first three batters reached safely for Lamar, loading the bases up with no outs. Labas preceded to strike the next two Lamar hitters out. Cole Secrest connected on a liner, but it was right at shortstop Hal Hughes as the Tigers were able to work out of the bases-loaded jam.

Leading off the sixth inning for the Tigers, Smith launched his second home run of the year – his first came against Notre Dame on February 16 to lead LSU to a comeback victory. With one out, left fielder Daniel Cabrera drew a walk and worked his way over to third base after he stole second and advanced to third on a throwing error from the catcher.

First baseman Austin Bain extended his hitting streak to nine games, driving a single to center that dropped despite a diving effort from Lamar centerfielder Cole Girouard, as Cabrera came across to score, extending the LSU lead to 3-0.

“It couldn’t have gone any better for Josh’s return to the lineup,” Mainieri said. “We didn’t want him to play the entire game, because he’s not yet in playing shape. I’m glad I left him in there for that third at-bat when he hit the home run, and he also drew a walk against their left-handed reliever, which was important, because he hasn’t seen the ball come out of a left-hander’s hand in several weeks. Getting Josh back certainly make us better, and tonight’s performance gives him a lot of confidence going forward.”

Catcher Hunter Feduccia walked to begin the seventh inning for LSU and advanced to third base after two productive outs. After Smith walked, Duplantis lined a single up the middle, scoring Feduccia. Cabrera then launched a double, scoring Jake Slaughter – who was pinch running for Smith — and Duplantis, as LSU took the 6-0 lead.

The Tigers tacked on two more runs when the bases were loaded in the eighth inning with two outs. A sharply hit ball off the bat of Slaughter got past shortstop Philip Ingram as the Tigers took an 8-0 lead.

Labas got his eighth and ninth strikeouts of the evening in the ninth inning as he was able to keep Lamar off the scoreboard and propel the Tigers to victory.