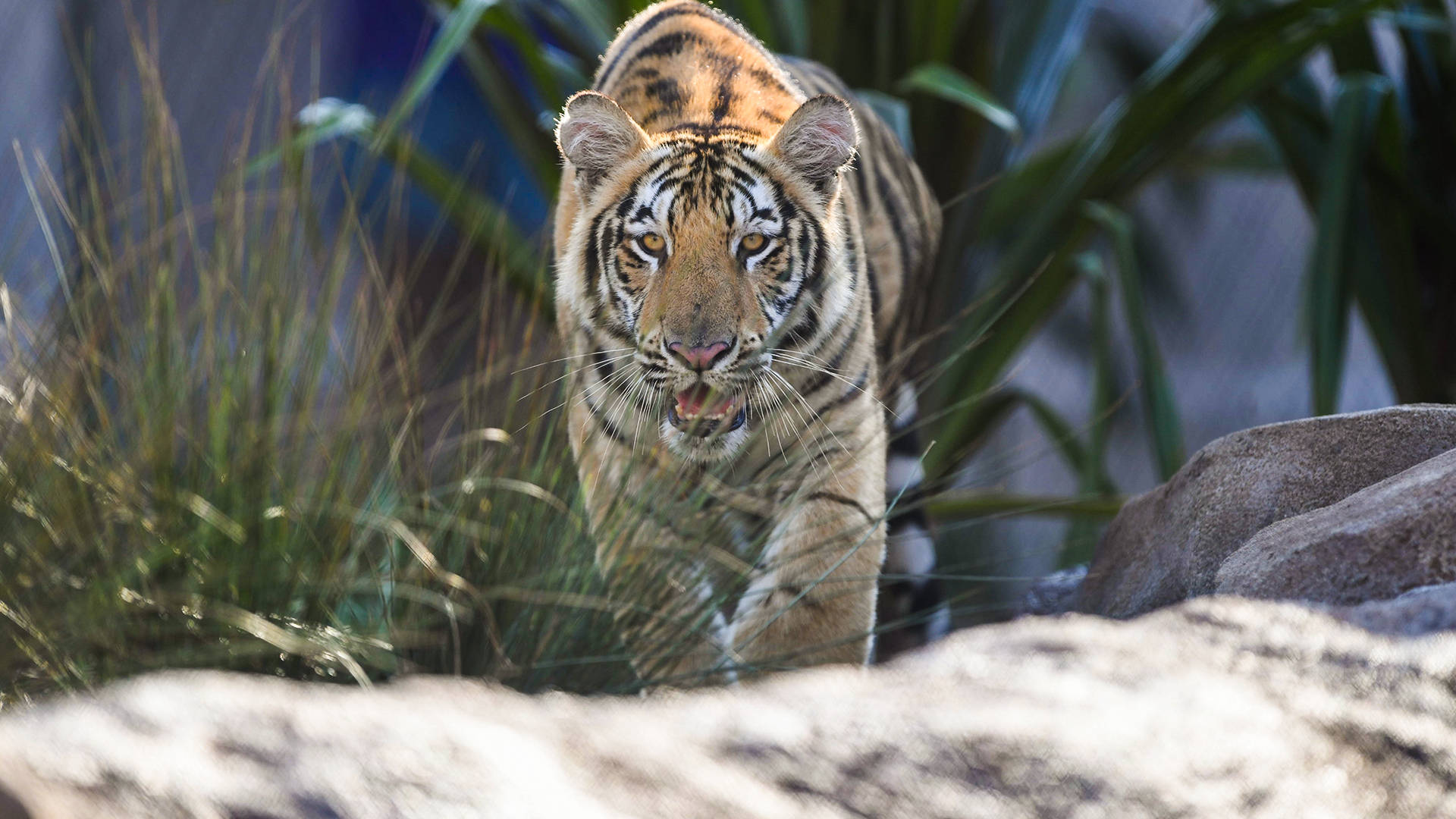 “Harvey” arrived on campus Aug. 15 was housed in the night house of the tiger habitat. The 11-month-old, Siberian-Bengal, male tiger was quarantined and observed by LSU veterinarians to ensure that he was healthy and a good fit for LSU.

The tiger acclimated well to his new surroundings and was deemed ready to become Mike VII. As Mike VII, his daily schedule is that he will be let out into his yard by 8 a.m. each day and brought back in his night house by 8 p.m. each day.

Mike VII, who has both Siberian and Bengal characteristics, was donated to LSU from a sanctuary in Okeechobee, Fla., called “Wild at Heart Wildlife Center.” Mikes IV, V and VI were also donated to LSU from rescue facilities. LSU has not purchased a tiger since Mike III in 1958, and LSU does not support the for-profit breeding of tigers. By providing a home for a tiger that needs one, LSU hopes to raise awareness about the problem of irresponsible breeding and the plight of tigers kept illegally and/or inappropriately in captivity in the U.S.

The tiger habitat and LSU’s animal care plan are licensed by the USDA. The facility, tiger and animal care programs are inspected annually to ensure that they comply with the Federal Animal Welfare Act and other USDA policies and guidelines.

Mike VII entered his habitat on the same day the shadow of a total solar eclipse traversed the United States for the first time since June 8, 1918. Baton Rouge will receive a view of 75-percent coverage of the eclipse at 1:26 p.m. CT.

Join us for the Welcome #MikeVII event tomorrow at 4:30 pm outside his habitat. #LSU 🐯 pic.twitter.com/RCcsv5b9wa

About Mike the Tiger’s Habitat

Mike the Tiger, a famed live Bengal Tiger that serves as the graphic image of all LSU Athletics teams, resides between Tiger Stadium and the Pete Maravich Assembly Center.

In 2005, a $3.7 million 15,000-square foot environment was created during the reign of Mike V that included lush planting, a live oak tree, a waterfall and a stream evolving from a rocky backdrop overflowing with plants and trees.

The backdrop of Mike’s Habitat features an Italianate tower – a campanile – that creates a visual bridge to the architectural vernacular that is the underpinning of the entire LSU campus. This spectacular habitat allows for state-of-the-art technologies, research, conservation and husbandry programs, as well as educational, interpretive and recreational activities.

It is, in essence, one of the largest and finest Tiger habitats in the United States. It’s also become one of the most visited landmarks in the state of Louisiana.

In preparation for the arrival of Mike VII in the summer of 2017, several enhancements were made to the habitat. The enhancements include a comfort rock, rockwork tree, improved water features, and resurfacing of the pool.

The comfort rock is a naturalistic element within the habitat that provides a heated or cooled surface for ultimate relaxation in Mike’s Habitat. The rockwork tree imitates a tiger’s natural habitat and serves to soften the impact of the steel column supporting the overhead mesh canopy.

The pool and stream system will help keep Mike cool in the summer months and foster health activity.

At a cost of approximately $950,000, the project was fully funded through the Tiger Athletic Foundation. Many of the enhancements were made possible through a generous donation from Kelly and Harper Spears. Additionally, funding from supporters of TAF’s Mike the Tiger Brick Program helped cover cost of this project and future maintenance of the habitat. These donations continue to be a testament to the love the LSU family has for our live Tiger mascot, Mike.