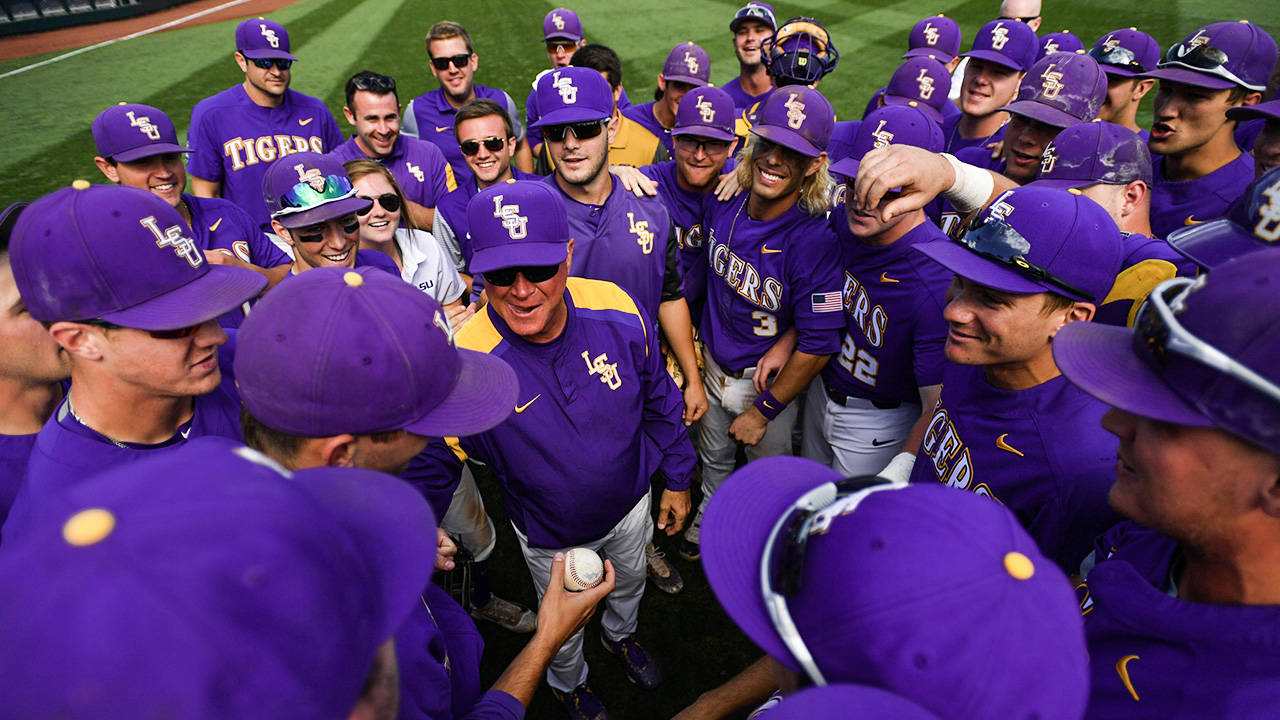 In 2017, LSU (52-20) was co-champion of the Southeastern Conference with the Gators, won NCAA Regional and Super Regional Titles and won three elimination games in the CWS prior to the final series.

Freshman right-hander Tyler Dyson (4-0) earned the win for the Gators in his second career start. Dyson limited LSU to one run on three hits in six innings with two walks and two strikeouts.

LSU starter Jared Poche’, the winningest pitcher in school history with a 39-13 career mark, was charged with the loss to finish with a 12-4 mark in 2017. Poche’ worked 5.2 innings and was charged with two runs – none earned – on seven hits with one walk and three strikeouts.

“I’d just like to thank all the LSU fans and people that have followed the program,” said LSU coach Paul Mainieri. “They came up here in droves from Baton Rouge and all parts of Louisiana and really throughout the country. And we’re really sorry we couldn’t deliver the championship for them. I know they wanted it badly. They encouraged us, and we represent a wonderful state, and I wish we could have finished the job. I’m really proud of our team; we came up a little short, but we’re very, very proud.”

“You always think you’re going to win it,” said LSU senior shortstop Kramer Robertson. “And for the finality of it all is tough. But I’m at peace with my
career, I gave everything I had to this university and to this team. It’s tough to think it’s over. We gave everything we had, and we just didn’t win the national championship. We got second place, but it was a special group of guys in there, and we made relationships that will last forever.”

Florida took a 1-0 lead in the bottom of the first inning with a fielding error and two singles off Poche’ to start the game. Deacon Liput hit a sharp ground ball that LSU first baseman Nick Coomes couldn’t corral in time to get the Gators leadoff hitter. Dalton Guthrie followed with a single to left that put runners on first and third, and JJ Schwarz also singled through the left side to drive in Liput.

With runners on first and second with one out, Poche’ retired the next three Gators to limit the damage.

An error led to another Florida run in the second inning. With two outs, Florida’s Nick Horvath singled through the left side. Horvath looked to be caught stealing on Poche’s pickoff, however, Coomes dropped the ball on his throw and the error put a runner in scoring position. An RBI single by Liput gave Florida a 2-0 lead, both runs unearned.

Poche’ ran into trouble again in the third, as Nelson Maldonado and Jonathan India each singled to start the frame. After a groundout, Mike Rivera was intentionally walked to load the bases. Poche’ earned a three-pitch strikeout of Ryan Larson before getting Horvath to pop-out on the infield.

LSU put runners on base in 3-of-4 innings against Tyler Dyson with two hits and a walk, but the Tigers couldn’t put together a rally to shake the freshman righthander who was making his second career start.

After Poche’ retired the Gators in order in the bottom of the fourth, LSU put pressure on Dyson when Jake Slaughter drew a nine-pitch leadoff walk. However, three ground-ball outs ended the brief rally with Slaughter on third base.

With two outs and a runner on second in the bottom of the sixth, Poche’ left the game after 5 2/3 innings. Reliever Zack Hess earned a strikeout of Liput to end the sixth.

LSU got on the scoreboard in the top of the seventh, as Zach Watson singled to start the inning. Two pitches later, Florida went to its closer, Michael Byrne.

After Watson stole second, Smith doubled to right-center field to drive in Watson and narrow the deficit to 2-1. With no outs and Smith on second, Slaughter singled through the left side, but Smith had to hold up and was forced to stay at third base.

The Tigers looked to have tied the game on a ground-ball double play by Michael Papierski, however, Slaughter was called for interference sliding into second base and Smith was put back onto third base. Byrne got out of the jam when Beau Jordan lined out to center field.

LSU had another opportunity to score runs in the eighth inning, as Robertson battled for a leadoff single to right field, moved to second on a wild pitch and then third when Cole Freeman legged out a bunt single.

However, after Byrne struck out Antoine Duplantis, Florida went made another pitching change. Making his first appearance out of the bullpen in 2017, Jackson Kowar got Greg Deichmann to ground to first, where Schwarz threw a strike to home plate and Rivera applied the tag on Robertson for the second out. Watson lined out to center field, and the Tigers’ threat was thwarted.

Florida delivered the final blow in the bottom of the eighth by putting up four runs against Hess.

Kowar was credited with his first save of the season for the Gators.

“It’s not easy being an athlete in college baseball, especially at a place like LSU,” Mainieri said. “The idea of being an LSU baseball player is a great thing. You play in front of big crowds, big games. Omaha, national championships you’re going for. The flipside of that is that’s what’s expected of you, and that’s an awful lot of pressure to put on young men that are 18 to 22 years old, and the coach is demanding and everybody is demanding.

“So it’s all part of them growing and becoming prepared for life after baseball or life after college. And so there’s a lot of things I’ll remember about these kids. When you play baseball at LSU, you become part of the LSU family and it’s a lifetime contract.”