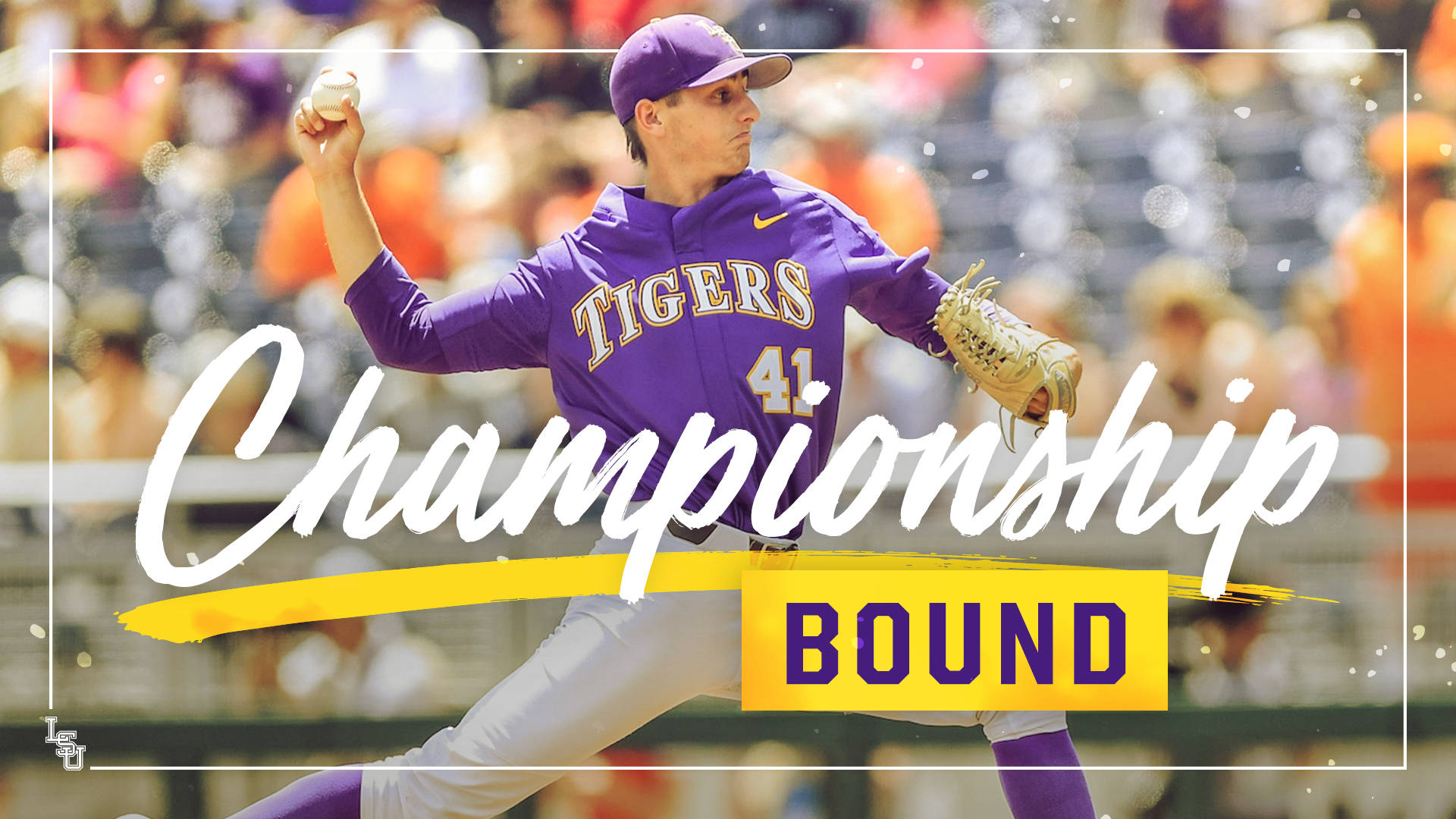 LSU has played in the championship series once before – a 2-1 series win over Texas for the 2009 CWS national title – and have a perfect 6-0 record in all CWS championship games.

Catcher Michael Papierski hit homers from both sides of the plate including a three-run shot from the left side off Oregon State starter Bryce Fehmel (6-3) that gave LSU a 3-0 lead in the bottom of the second inning. Papierski became the sixth player in LSU history to hit two homers in a College World Series game.

Meanwhile, Gilbert (7-1) picked up where Alex Lange and Zack Hess left off in a 3-1 two-hit victory on Friday.

“We’re obviously very thrilled to be staying in Omaha, staying in Omaha for a few more days,” said LSU coach Paul Mainieri. “I wish I could tell you that I went to bed last night and dreamt that Caleb Gilbert would give us seven shutout innings on one-hit ball, and that Michael Papierski was going to launch one out from each side of the plate, and that (LSU designated hitter) Beau Jordan was going to tomahawk a 97-mile-an-hour fastball into the stands, but I’d be lying if I told you that.”

Starting for only the fifth time in 2017, Gilbert retired the first 11 Beavers he faced before a fourth-inning walk, and allowed only two hits in 7 1/3 innings with a career-best seven strikeouts. He threw 97 pitches and left the game after Oregon State’s only run, a solo home run by third baseman Michael Gretler that cut the LSU lead to 6-1.

“It’s a surreal feeling to be able to pitch your team when the back’s against the wall into the College World Series final,” Gilbert said. “But I just had all the faith in the world in my teammates and my coaching staff, and just really went out there and pitched my game, tried to attack early with a heater and get ahead and just trust my defense behind me.”

For the second-straight day, Hess entered with one out in the eighth inning and recorded a pair of outs to get out of the inning with no further damage. Hess allowed a single through the right side and a walk to start the ninth inning, but turned the inning around with a strikeout, a foul-out and groundout.

Oregon State suffered consecutive defeats for the first time since May 10 and 13, 2016. The Beavers’ offense batted .085 against LSU in the past two games (5-for-59) with six walks and 21 strikeouts. Prior to the four home runs allowed to the Tigers, Oregon State had only allowed 21 in 2017.

Speaking of home runs, LSU gave its pitching staff an early lead once again with a two-out rally in the second inning off Fehmel. Josh Smith earned a full-count walk and moved to third on a double down the left-field line by Jordan. On a 3-1 count, Papierski knocked a home run to right field that put the Tigers ahead 3-0.

The Tigers added to the lead in the third and chased Fehmel from the game with an RBI single by Antoine Duplantis that drove in Kramer Robertson for a 4-0 lead.

With one out in the fourth, Papierski hit a solo homer from the right side of the plate off Oregon State reliever Brandon Eisert. Jordan capped LSU’s scoring in the sixth inning with a solo shot of his own off OSU’s Drew Rasmussen that pushed the advantage to 6-0.

“Definitely feels good to get this win and to go to the College World Series finals,” Papierski said. “I put some good swings on fastballs today. And after that the wind helped a little bit. But that wasn’t the highlight of the game. It was Caleb Gilbert. He went out there and went seven strong innings, made one mistake at the end, but he was unbelievable today. And Hess came in and did what he always does.”

LSU Players with 2 Home Runs in a CWS Game:

It’s an All @SEC final! #LSU will take on Florida in the Championship Series beginning at 6 p.m. CT Monday on ESPN. pic.twitter.com/PmzagCsVZh

How about Coach Paul and the Tigers! Playing for the championship in Omaha! Here come The Tigers!

“And #LSU‘s going back to the College World Series finals!” pic.twitter.com/uthl3VDUKK

LSU will make its 7th trip to the championship round in the #CWS. They won the title the previous 6 times. pic.twitter.com/AOvZr6Z461

See every @LSUbaseball fan on Monday because we’re playing for the NATTY CHAMPIONSHIP!!!!!! #geauxtigers

Hey Baton Rouge, you’ve got 49 hours to get to OMAHA!!! Find a way. pic.twitter.com/5AjaF6uDyT

Many have asked. I can’t find an instance of a hitter homering from both sides of the plate in a CWS game since 1999 (before Papierski).

Michael Papierski becomes the first player to ever hit 2 HRs in a #CWS game at TD Ameritrade Park Omaha! pic.twitter.com/zF6D0fVm54