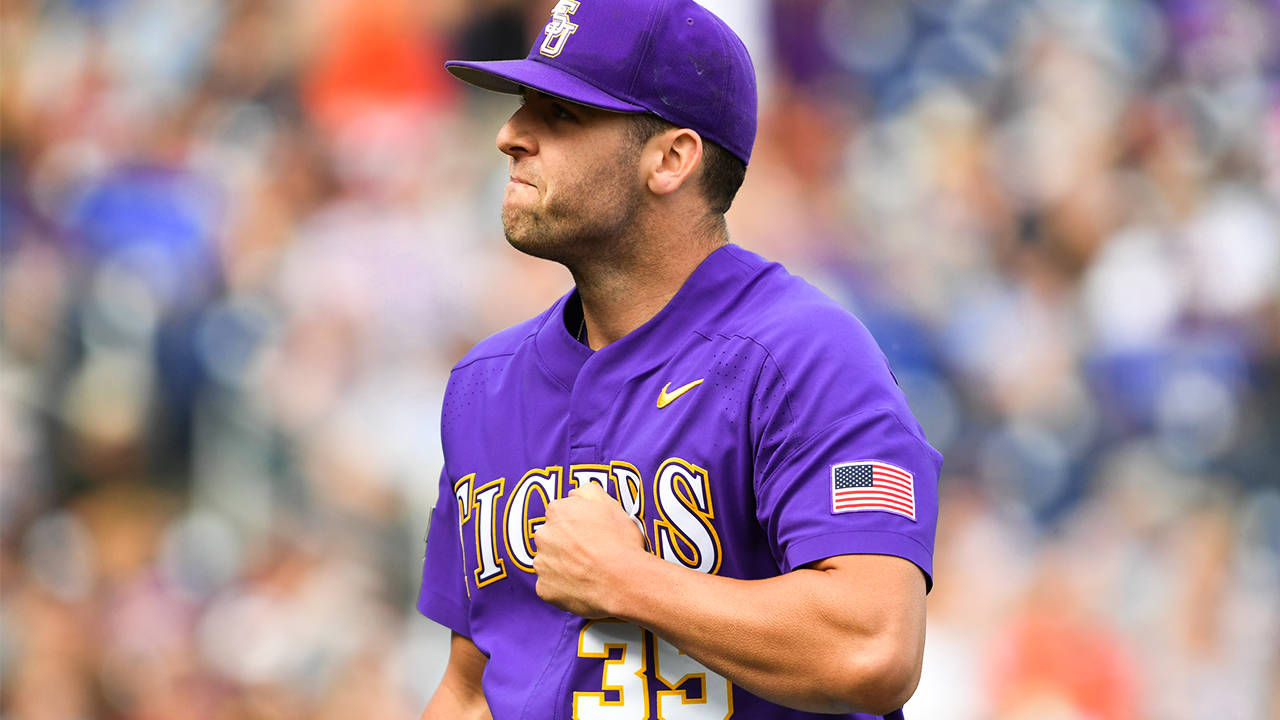 Lange (10-5), a first-round draft pick, put together another special performance, pitching into the eighth inning while allowing only one run on two hits against the Beavers. He struck out eight on the afternoon to bump his career total to 406, three shy of the LSU record set by Scott Schultz (1992-95).

It was LSU’s first two-hitter in its College World Series history. The LSU also victory ended Oregon State’s 23-game win streak; the Beavers’ last loss prior to Friday came on April 29, when the Beavers were defeated by Southern California.

LSU (51-18), which has won 19 of its past 20 games, forced a winner-takes-all bracket final rematch against Oregon State to be held Saturday at 2 p.m. CT on ESPN and the LSU Sports Radio Network (listen free at www.LSUsports.net/live). The Tigers will be the home team on Saturday. TCU beat Florida, 9-2, on Friday night and will have a rematch at 7 p.m.

Hess was credited with fourth save of the season, and he has recorded eight strikeouts in three scoreless CWS innings over three appearances. He said he would be ready to contribute again on the mound Saturday if called upon.

“Whatever my team needs me to do, then I’m fully ready to meet the challenge,” Hess said. “I’m looking forward to tomorrow and seeing what this team can do against a great Oregon State team.”

“Obviously it was a phenomenal ball game to watch, and I’m sure it was a great game to play in,” said LSU coach Paul Mainieri after Friday’s win. “I know it was a great game to coach because you’re going up against a top team, the number one team in the country. It’s only got four losses. We beat an All-American today that was 14-0, first loss of the year. He’s really outstanding, but I like our guy, too, and I felt confident about Alex’s ability to go out there today and pitch a gem.”

“I felt great. I felt strong,” Lange said. “I was trying to keep us deep in the ball game, give Hess a break. He’s been going almost every game. Try to keep his pitch count down as much as possible because he’s going to be so big moving forward tomorrow and then if we’re fortunate to make the championship series. That was my mentality, just take this team as deep into the game as I can, and when it’s time, hand it over to the monster.”

In the top of the second inning, LSU built a 2-0 advantage off Oregon State starter Jake Thompson (14-1). Tigers right fielder Greg Deichmann earned a double to right field – the first hit by a left-hander against Oregon State in the tournament – and moved to third on a single by the middle by Zach Watson.

Another single by the middle scored Deichmann, and Beau Jordan executed a safety sacrifice to perfection for the second-straight game to drive in Watson and give LSU a 2-0 lead.

Watson, who’s 8 for his last 12 in Omaha, led the Tigers at the plate with a perfect 3-for-3 afternoon that included a walk and run scored.

Oregon State (56-5) cut the deficit in half in the bottom of third, as Lange struggled with his command in the inning. His third walk of the inning game with the bases loaded and LSU’s lead fell to 2-1.

A no-doubt solo home run off the bat of LSU third baseman Josh Smith in the top of the seventh off Thompson gave LSU some breathing room. Oregon State’s Max Engelbrekt entered with two outs in the inning and allowed a single by Jake Slaughter before getting Kramer Robertson to ground out and end the inning.

Lange said he appreciated the huge ovation he received from the LSU fans when he exited the game in the bottom of the eighth.

“This is pretty special,” Lange said. “This team and this community, it’s pretty special. You don’t understand, it’s hard to put into words if you’ve never seen a game at Alex Box Stadium or been around LSU athletics, the passion that fans put into you, it’s the best feeling ever. It’s second to none. We wouldn’t be up here if it wasn’t for the fans and everything and how much they support our program.

“The reason that you come to Baton Rouge to play baseball is because of the fans. So just taking that in is pretty awesome and something I’ll remember forever.”

Take a look at the final box score from today’s game as Lange collected his 400th career K and Hess earned his 3rd save of the CWS. pic.twitter.com/eM7oYuTZdC

.@Zack_Hess44 does it again!
Got his 3rd save in Omaha with this beauty. #LSU pic.twitter.com/xRG9U7duNW

Sixth pitcher in @SEC history to strike out 400, @Lange_17 pitched a gem to keep the Tigers alive at the @NCAACWS. #GeauxCWS pic.twitter.com/VQrA9Jc3L7