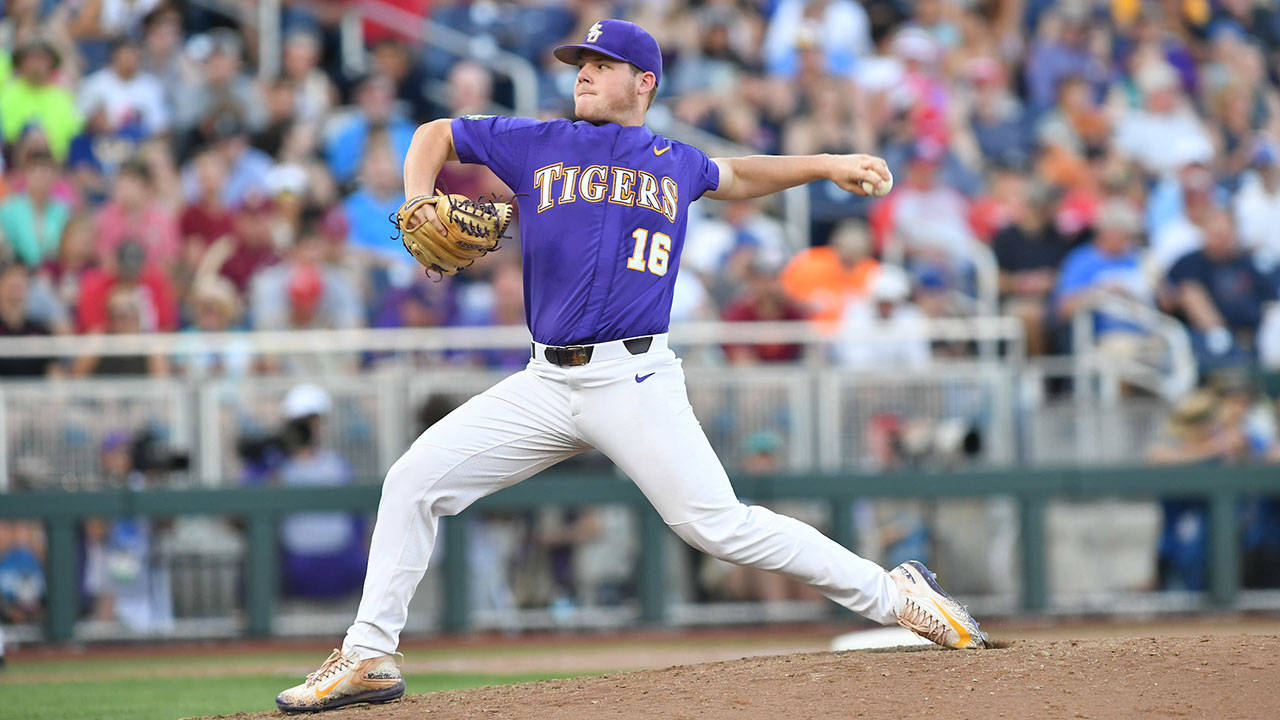 OMAHA, Neb. — LSU senior Jared Poche’ put the Tigers in the semifinal round of the 2017 College World Series with a record-setting 39th career victory, 7-4, over Florida State on Wednesday night at TD Ameritrade Park Omaha.

By beating Florida State (46-23), LSU (50-18) advanced to face No. 1-seed Oregon State. LSU must beat the Beavers twice to advance to the best-of-three CWS Final series.

LSU’s first game against Oregon State will be at 2 p.m. CT on Friday. If the Tigers win, another game will be played Saturday at either 2 or 7 p.m. All remaining tournament games will be televised by ESPN and broadcast on the LSU Sports Radio Network at www.LSUsports.net/live.

LSU has 50 wins in a season for the 13th time in school history and for the fourth time in the past nine years.

“A great victory for us,” said LSU coach Paul Mainieri. “Congratulations to Jared Poché on becoming the winningest pitcher in LSU baseball history and we’re excited for him, and what an honor and great accomplishment.

“Jared was the key to the game, obviously. Florida State leads the country with base on balls, and I think Jared walked two in eight innings. Just coming out right away and showing great command I thought set the tone for the game and then we had a big inning in the top of the second.”

“If you would have told me four years ago before I started my career at LSU that in four short years that you’re going to be in Omaha and you’re going to break the all-time wins record, there’s no way I would have believed that,” Poche’ said. “This record is definitely not an individual award. Having all those guys behind me over the course of my career making play after play, picking me up on defense and scoring runs in the games I throw, I couldn’t have done it without those guys.”

The Tigers gave Poche’ a five-run cushion in the top of the second inning off Seminoles starting pitcher Cole Sands (6-4). Greg Deichmann led off the inning with a double down the right-field line, Zach Watson singled to center and Josh Smith put the Tigers on the scoreboard with a single to right that brought Deichmann home easily.

A RBI on a sacrifice bunt by Beau Jordan scored Watson for a 2-0 lead. Michael Papierski then reached on a fielding error to setup Jake Slaughter‘s three-run home run to left field that put LSU ahead 5-0 after only four outs were recorded by Florida State.

“I just went up there and just wanted to get a good swing on the ball and do my job, and when I hit it, I really thought it was not a good chance of going out,” Slaughter said. “And I was just really happy that it went over the fence. I was fired up that I got to give us a big lead.”

Florida State answered in the bottom of the second inning with its first hit off Poche’, a solo homer by Drew Mendoza.

Neither team could push across a run against Poche’ nor Florida State reliever Andrew Karp until the sixth when the Seminoles added an unearned run to trail 5-2.

LSU responded with two much-needed insurance runs in the top of the ninth inning. Kramer Robertson led off with a single, stole second, moved to third on a sacrifice bunt and slid under a tag on an RBI fielder’s choice by Duplantis.

Florida State ended Poche’s evening by leading off the bottom of the ninth with two solo homers to left by designated hitter Quincy Nieporte and by catcher Cal Raleigh.

However, Zack Hess entered to earn his third save of the season and his second of the CWS by striking out the side.

FSU starter Cole Sands (6-4) was charged with the loss as he surrendered five runs on four hits in 1.1 innings with no walks and no strikeouts.

Lucky No. 13! With the 7-4 win against Florida State, the Tigers have notched their 13th 50-win season! #GeauxCWS pic.twitter.com/LdmpVGNfrh

The Tigers are headed to Friday! #CWS pic.twitter.com/07q3yLt9ba