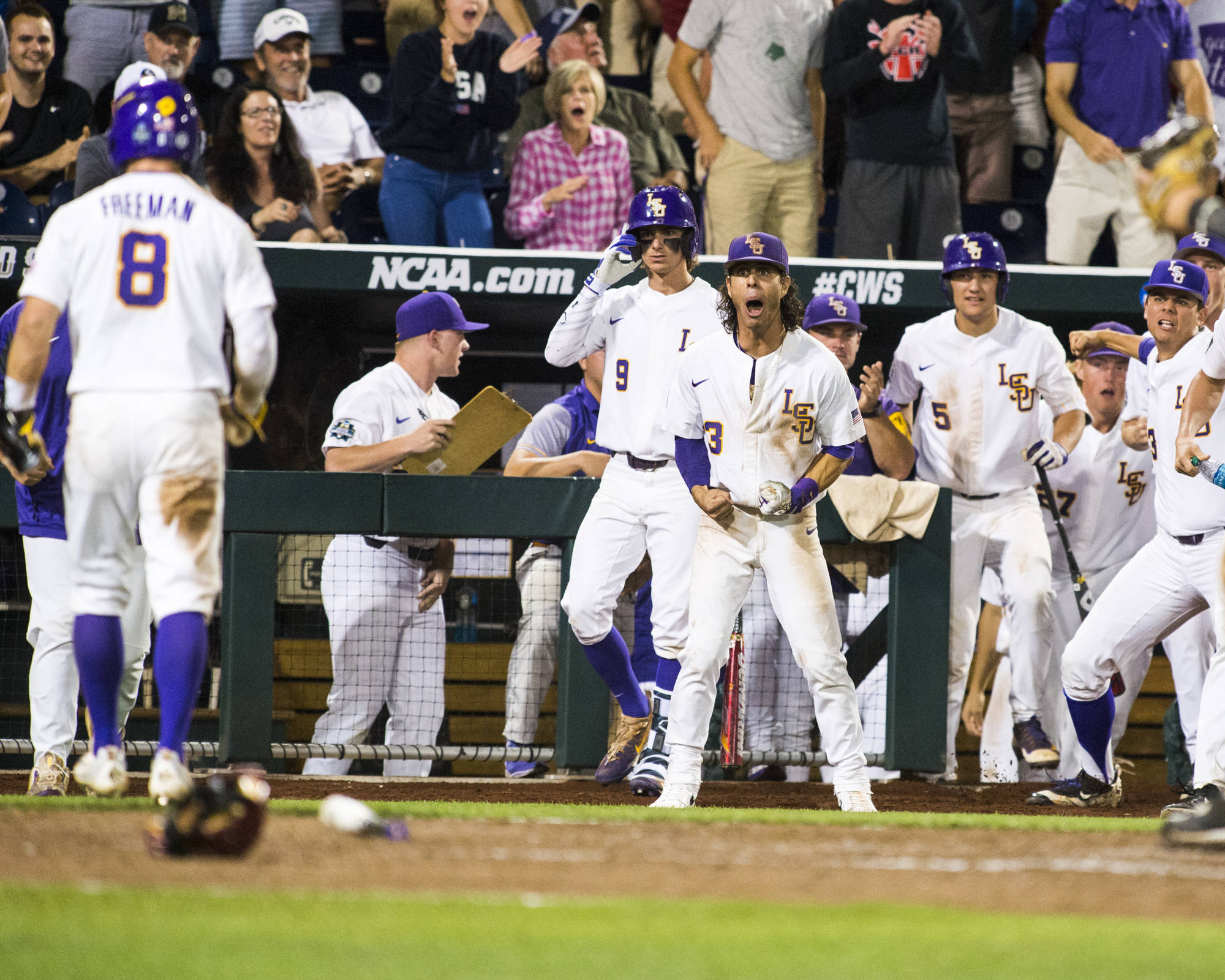 OMAHA, Neb. – LSU rightfielder Greg Deichmann drove in the go-ahead run in the bottom of the eighth inning Saturday night, and senior left-hander Jared Poche’ tied the school record for career wins as the Tigers posted a thrilling 5-4 come-from-behind win over Florida State in their opening game of the College World Series at TD Ameritrade Park.

LSU won its 17th straight game, improving to 49-17 on the year, while Florida State dropped 45-22. The Tigers have won 22 of their past 24 games, including 10 consecutive postseason contests.

LSU, the NCAA Tournament No. 4 National Seed, will play No. 1 National Seed Oregon State (55-4), a 6-5 winner Saturday over Cal State Fullerton, in a winners’ bracket game at 6 p.m. CT Monday. The game will be televised by ESPN, and it will be carried by affiliates of the LSU Sports Radio Network.

“I thought that our team didn’t really play that great, at least not up to our potential,” said LSU coach Paul Mainieri. “And yet somehow we still found a way to win, which is really encouraging for us. I think our team will play much better Monday night now that they have one under their belt. They’re used to the surroundings, and they’re not going to be uptight at all. They’re going to go out there let it rip on Monday night. And I think you’ll see a team play a lot better.”

Poche (11-3) entered the game in the seventh inning and fired 2.2 scoreless frames to earn his 38th career win, tying Scott Schultz (1992-95) for the most pitching victories in LSU history. Poche’ allowed two hits while recording no walks and two strikeouts before yielding the mound to freshman right-hander Zack Hess, who earned his second save of the season.

Hess took the mound with a runner at second base and two outs, and he walked shortstop Taylor Walls before fanning third baseman Dylan Busby to end the game.

We would have expected that Jared would have gotten his record win in the regional or super regional, but I guess he wanted to save it for a more exciting time here in Omaha,” Mainieri said. “He ties the career wins at LSU, and we’re very proud of Jared for that accomplishment.”

“Just with all the great pitchers that have come through LSU for me to tie that record and put my name at the top of the list, it’s something that’s hard to describe,” Poche’ said. “I’ve been thinking about it all year and been hoping that it would happen obviously in the last two weeks. But I guess God had a better plan and wanted it to happen in Omaha. So I’m excited.”

LSU entered the bottom of the eighth inning facing a 4-3 deficit; however, the Tigers struck for two runs to take the lead. Second baseman Cole Freeman delivered an one-out single, and he scored from first base when leftfielder Antoine Duplantis singled (following a short delay to remove a beach ball from right field), and Florida State rightfielder Steven Wells committed two errors after attempting to field the ball.

Wells misplayed Duplantis’ hit in right field to allow Freeman to advance to third, and Freeman scored when Wells made an errant throw to the infield while Duplantis raced to third.

FSU coach Mike Martin elected to lift starting pitcher Tyler Holton, and Deichmann greeted reliever Alec Byrd with a single through the right side to score Duplantis with the eventual winning run.

“It’s a great feeling anytime you get the go-ahead run,” said Deichmann, who was 0-for-3 at the plate before his game-winning hit. “Coach Mainieri has always talked to me, ever since I stepped onto the campus, about how you’re going to come up in unique situations, and how one-run games are going to define your season. I had to wipe the first three at-bats clean and focus on getting the job done.”

Holton (10-3) was charged with the loss, as he surrendered five runs – three earned—on eight hits with two walks and five strikeouts.

The Seminoles grabbed a 2-0 lead in the top of the first inning when Busby belted a two-run homer, his 15th dinger of the year.

LSU responded with a run in the bottom of the first when Duplantis drew a two-out walk and later scored when Deichmann swung and missed at strike three, but the ball got away from FSU catcher Cal Raleigh, and Duplantis dashed all the way home from first base.

Florida State increased the lead to 3-1 in the third when Walls doubled and scored on Busby’s single.

The Tigers reduced the margin to 3-2 in the bottom of the third when Freeman reached on a fielder’s choice, stole second base and scored on Duplantis’ two-out single.

Florida State added a run in the fifth on an RBI single by designated hitter Quincy Nieporte, but LSU catcher Michael Papierski launched a homer – his ninth of the season – in the bottom of the inning to narrow the gap to 4-3.

Take a look at the box score as @Jared_Poche collected his 38th career win and Hess earned his second save of the season. pic.twitter.com/WMS9A6BOfl

GALLERY | @LSUbaseball
beats Florida St. 5-4 in a thrilling game to advance in the winner’s bracket of the #CWS!
📸s: https://t.co/H9T1devSnr pic.twitter.com/OeJKRs9LEJ

Take a bow, @Jared_Poche! He is now tied with Schultz for the most career wins at LSU after entering from the bullpen against FSU. #GeauxCWS pic.twitter.com/EktrWCnx5L

Well, @RallyBeachball is a thing! Anyone have any purple and gold beach balls to send to Omaha? #GeauxCWS https://t.co/IfCLAf7l4h pic.twitter.com/ABZzGGOk6c