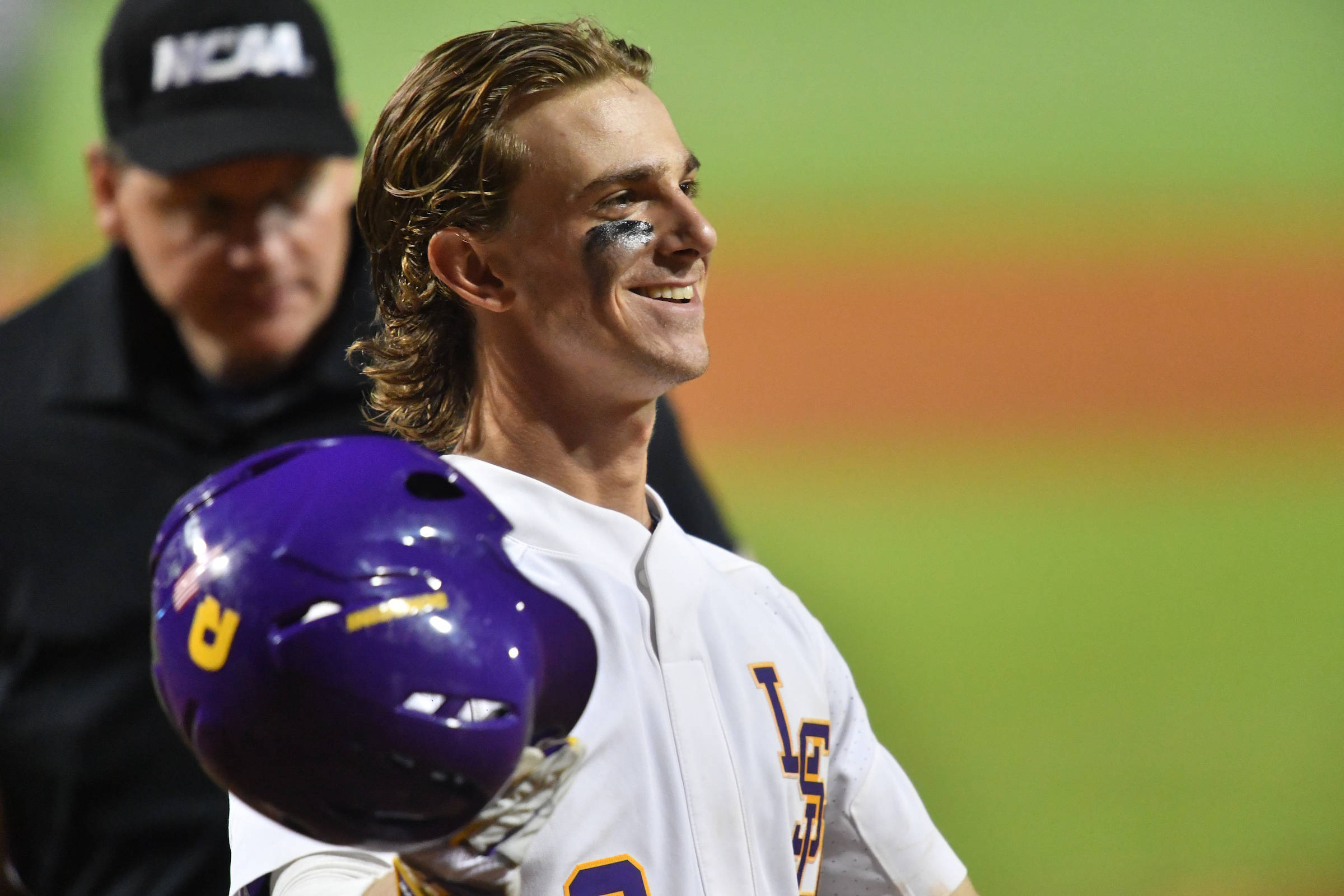 BATON ROUGE — Top-seeded LSU extended its winning streak to 13 on Saturday, as the Tigers advanced to the NCAA Baseball Regional final with an 11-6 victory over Southeastern Louisiana.

LSU (45-17) advanced to the NCAA Regional Final on Sunday at 8 p.m. CT. The Tigers will face No. 3-seed Rice, a 9-5 winner over No. 2-seed Southeastern Louisiana on Sunday afternoon.

It was announced just before 7 p.m. Sunday that the SEC Network will televise the championship round between LSU and Rice. However, with Arkansas-Oral Roberts airing on the SEC Network, it’s possible the LSU game may start on another ESPN network. Monitor @LSUBaseball on social media for updates. Fans can watch all NCAA Regional games on WatchESPN.com.

For the second-straight day, the LSU freshman center fielder hit a pair of home runs to lead the Tigers to victory. Watson, who hit four homers in the regular season, matched that total in his first two NCAA postseason games. Zeph Zinsman was the last Tiger to hit four home runs in an NCAA Regional in 2001.

Watson was 3-for-5 with three runs and three RBI.

LSU starter Alex Lange (9-5) needed a couple innings to find his groove. After giving up five runs while only recording five outs, Lange settled into a rhythm. He put up four-straight scoreless innings and left with a 10-5 lead. In six innings pitched, Lange allowed five runs on eight hits with six strikeouts and an intentional walk. His ERA grew from 2.59 to 2.87.

Leadoff hitter Kramer Robertson bounced back from an 0-for-5 NCAA opener to go 4-for-4 on Saturday. He scored twice and saw his batting average to increase 12 points to .319.

For the first time since 2009, LSU has scored at least 10 runs in seven of its past eight games.

The start of Saturday’s game was delayed to 8:46 p.m. from a scheduled 7 p.m. first pitch due to rain and lightning delays in the previous game. The game ended after midnight.

🚨 ALERT ZACH WATSON BOMB 🚨
He hits his FOURTH home run in two days. This one is a two-run bomb to make it 10-5 🐯 pic.twitter.com/u8LycGhAvh

Cool him off! @Watson2068z is on 🔥🔥🔥 with his third home run of the weekend. pic.twitter.com/O1m8GfnHSC

Lions’ rightfielder Ryan Byers led off the game with a solo home run to center field that SLU a 1-0 lead. Three more warning-track flyouts ended the first frame of the contest, as Lange stuggled to get his breaking ball over for a strike.

LSU responded with a four-run frame, as RBI singles by Cole Freeman and Greg Deichmann were followed by a two-run home run to right field by freshman Josh Smith that put the Tigers ahead 4-1. Mac Sceroler (9-2) walked the next two batters before getting out of the jam with a ground ball out.

Southeastern Louisiana continued to square up Lange’s fastball offerings, as four of the first five Lions singled to score a pair of runs. A suicide bunt by Byers scored two Lions and gave SLU a 5-4 lead.

The Tigers tied the game at 5-5 in the bottom of the third when Watson singled, stole second and moved to third when the catcher’s throw went into center field, then scored on a single by Beau Jordan.

With Lange getting his breaking ball under control and putting up three-straight zeros, LSU was able to chase Sceroler in the bottom of the fifth inning with three runs.

Watson led off the inning with a solo homer to left that put LSU ahead, 6-5. Smith was hit by a pitch and moved to second on a run-and-hit groundout. After a walk to Papierski and a single by Jake Slaughter loaded the bases, Kramer Robertson improved to 3-for-3 on the evening with an RBI single to right. A fielder’s choice RBI by Freeman scored Papierski and LSU led 8-5.

Lange finished off the top of the sixth unscathed and exited after 110 pitches. After allowing five runs on six hits in the first two innings, he gave up only two hits in his last four frames.

Zach Hess allowed only a solo home run while striking out four in two innings of relief. Hunter Newman pitched a perfect ninth inning for LSU.

Robertson scored LSU’s final run in the bottom of the seventh on a wild pitch.

“It was a big win for the Tigers tonight. This game is always so pivotal. If you’re fortunate enough to win the first game, that winner’s bracket game is the difference between having to win one more game or three more games. That gives you a great advantage knowing that you only have to win one more game and how you manage your staff and so forth. I thought our team really played outstanding tonight. After yesterday afternoon, I just thought that was such an aberration. I thought tonight we came out and played a terrific ball game. We were also up against a really tough team. That Southeastern Louisiana team and their coach Matt Riser know who they are and they play it to the ‘T’. They played really well tonight offensively. They have three big home run hitters in their lineup, and two of them hit home runs.  The rest of their lineup handles the bats and steals bases. They scored two runs on a squeeze bunt. We knew they had that play, and you can’t defend it.

“They just played really well and put a lot of pressure on us. I was just so proud of our guys because they answered the pressure. Every time Southeastern came in and scored, tied it or took the lead, our guys responded right back. It was a tremendous offensive day by our guys as well. I think Alex Lange also deserves an awful lot of credit for this victory tonight. In the first two innings, that’s probably the hardest he’s been hit in his career. Then, he gives us four shutout innings and gets us to our guys in the bullpen. That’s what Alex has done his whole career. Even the games where he hasn’t had his greatest stuff, he finds a way to pitch deep into the game and give your team a chance to win. That’s why Alex will always go down as one of the greatest pitchers in LSU baseball history.”