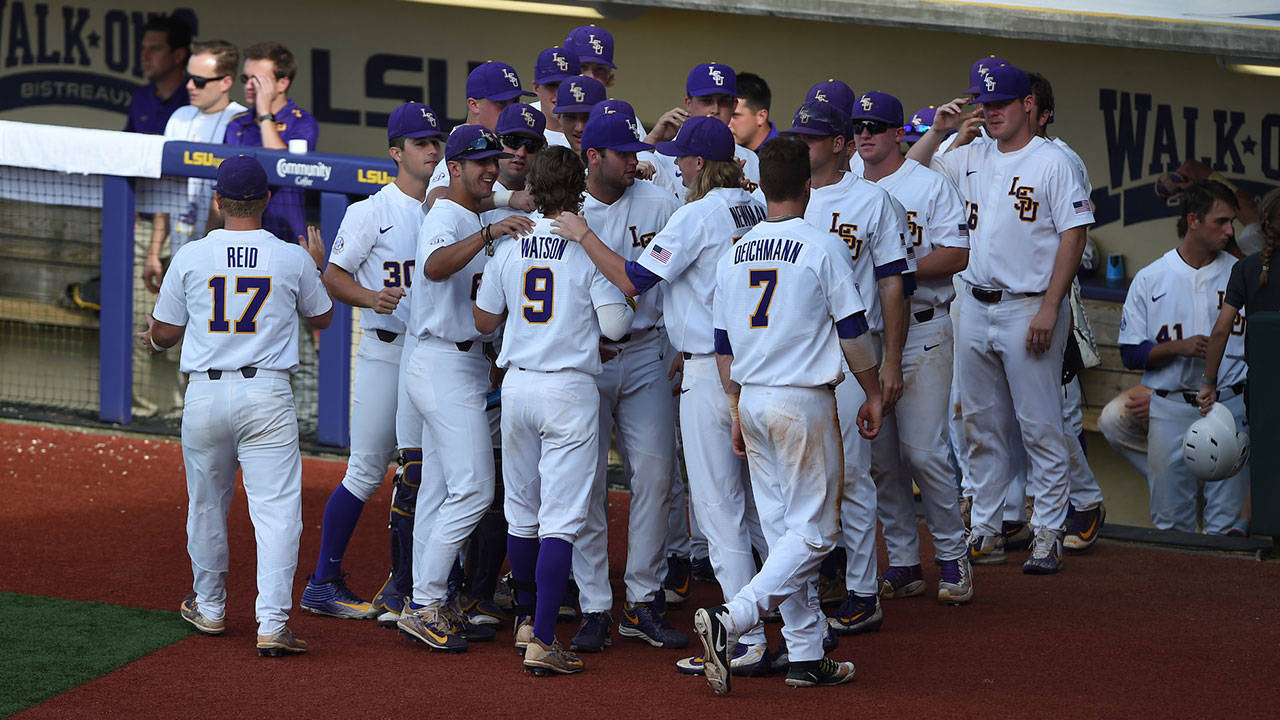 LSU (44-17), which won its 12th-straight game, overcame five fielding errors that led to six unearned runs in the first five innings. After trailing Texas Southern (20-33), 7-5, following the top of the fifth inning, LSU scored four runs in the fifth, four in the seventh and two in the eighth.

It was LSU’s 28th-straight win to open an NCAA Regional.

The homestanding Tigers scored 15 runs, the most in an NCAA postseason game in the new Alex Box Stadium. LSU last scored more than 15 in NCAA postseason play against UC Irvine in 2008, the final game at the old stadium.

With LSU trailing 6-5 in the top of the fifth inning, right-hand pitcher Caleb Gilbert (5-1) entered in relief of starter Jared Poche’. Gilbert tossed 2 2/3 shutout innings while allowing only two hits with six strikeouts to shut down Texas Southern.

LSU center fielder Zach Watson, a freshman from Ruston, was 2-for-4 with two runs and four RBI. He became the first LSU player to hit two home runs in an NCAA postseason game since Ryan Schimpf in the 2008 Super Regional against UC Irvine – the final game at the old Alex Box Stadium.

LSU advanced to the winners’ bracket of the four-team, double-elimination NCAA Regional. The Tigers will face No. 2-seed Southeastern Louisiana, a 12-6 winner over No. 3-seed Rice late Friday.

Tickets to all NCAA Regional games are available at www.LSUtix.net.

Have a day, Zach Watson! He’s the first Tiger to record 2 HRs in a NCAA Tournament game since 2008 when Schimpf belted two against UCI. pic.twitter.com/U56Soe578u

For the 25th time, the #RoadtoOmaha goes through The Box … pic.twitter.com/NzoHEqR660

Texas Southern pulled out to a 2-0 lead in the opening frame when Poche’ loaded the bases with two singles and walk before recording an out. The visiting Tigers’ first run came on an RBI single by Christian Sanchez off third baseman Josh Smith‘s glove. The ball deflected to LSU shortstop Kramer Robertson, who threw to an uncovered first base. The error charged to LSU first baseman Nick Coomes allowed a second run to score.

Texas Southern extended its advantage to 3-0 on the top of the second inning, again by virtue of an LSU error. Smith’s two-out throwing error allowed Kamren Dukes to reach second, and Dukes came around to score on a single by Camacho that gave TSU a 3-0 lead.

LSU came back with four runs in the bottom of the second, as Coomes walked and Smith was hit by a pitch. Papierski put LSU on the scoreboard with an RBI single through the left side, and Watson cleared the bases with a three-run home run to left that put LSU ahead, 4-3.

LSU took advantage of a misplayed fly ball that was ruled a triple to center field for Freeman. A one-out single by Greg Deichmann pushed the LSU’s advantage to 5-3.

Both LSU and Texas Southern scored four runs in their respective ends of the fifth inning.

LSU committed a pair of errors in the top half that allowed TSU to plate four runs on two hits and two walks.

In the bottom half, Freeman led off with a double and moved to third on a single by Antoine Duplantis. After an intentional walk to Deichmann, Coomes singled to drive in Freeman. A sacrifice by by Beau Jordan scored Duplantis and tied the game at 7-7. Two batters later, Smith doubled to left to drive in Deichmann and Papierski extended LSU’s lead to 9-7 with a sacrifice fly that scored Coomes.

Both teams went to the bullpen in the fifth, and Gilbert nor Texas Southern reliever Michael Villanueva were charged with a run until Papierski hit a back-to-back home runs with one out in the bottom of the seventh that put LSU ahead 12-7.

The big hits chased the Texas Southern right-hander in favor of lefty Robert Loza, who allowed a double to Freeman and an RBI single to Duplantis.

A wild pitch and a groundout in the bottom of the eighth plated LSU’s final pair of runs.

Attendance was announced as 10,537