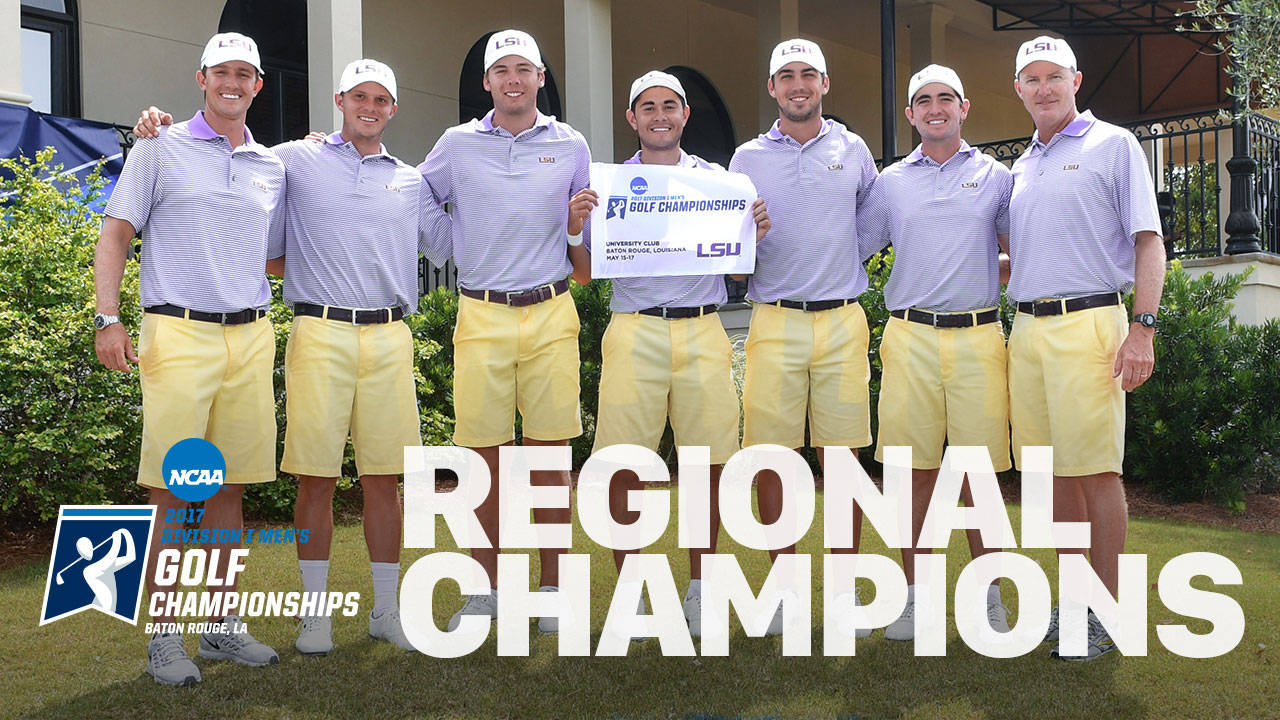 BATON ROUGE – No. 1 seed LSU led wire-to-wire to claim its first ever NCAA Regional title while joining Duke, Oregon, Virginia and Jacksonville in advancing to the NCAA Division I Men’s Golf Championships in what proved to be a dramatic final round Wednesday at the Baton Rouge Regional held at the University Club.

Sparked by Sam Burns‘ fourth individual title of the season, the Tigers finished eight shots clear of the fourth-seeded Blue Devils with a final 54-hole score of 2-over par 866 to defend its home course.

Duke, which positioned itself comfortably inside the Top 5 with the lowest team score of Tuesday’s second round with an even-par 288, closed out its week at 10-over par 874 to qualify for the NCAA Championships as the second-place team. No. 2 seed Oregon followed in third place at 15-over par, while No. 3 seed Virginia placed fourth at 17-over par and No. 7 seed Jacksonville finished fifth at 19-over par.

Each of the top-five teams at the NCAA Baton Rouge Regional earned their spot in the field of 30 teeing it up at the 2017 NCAA Division I Men’s Golf Championships to be held May 26-31 at Rich Harvest Farms Golf Club in Sugar Grove, Illinois. LSU and Oregon will compete as the last two NCAA Champions in 2015 and 2016, respectively.

Mason Overstreet of Arkansas qualified for the NCAA Championships as the top individual not among the advancing teams as he placed sixth on the final leaderboard with a score of 2-over par 218 for the week.

“University Club was University Club,” said LSU Head Coach Chuck Winstead. “You get double-digit winds, like I’ve said all week, and this golf course can defend par. I know my guys took some shots they’d love to have back. They could have scored better, but the flip side of that is you can always say that. They played hard. I’m proud of them. Now on to the next one.”

By winning its own NCAA Baton Rouge Regional, LSU picked up its single-season school record sixth tournament title of the 2016-17 campaign. The Tigers eclipsed their previous record of five tournament championship trophies won in both the 1959-60 and 2014-15 seasons. It also gave LSU its 31st team win in 12 seasons under Winstead, which is 15 more than any other head coach in the program’s history.

LSU added to its trophy haul in a season that’s also featured wins at the Maui Jim Intercollegiate and David Toms Intercollegiate in the fall and The Prestige at PGA West, Aggie Invitational and Tiger Classic this spring.

“It’s really hard to imagine that it’s our first time (to win a regional) given all of the great players that have come through LSU. But we will take it,” Winstead said. “This is another tournament. It means a lot so we had to show up and take care of business. The next event will be an event of its own.”

The fifth and final team in the field advancing to the NCAA Championships was not decided until well after other teams had cleared out of the University Club as Jacksonville and Northwestern squared off in a sudden-death playoff after tying one another for fifth place with scores of 19-over par 883 for the tournament.

After matching one another with scores of 2-over par from their five players at the 18th, Jacksonville emerged as the fifth qualifying team after playing the par-four 10th at 1-under par with one birdie and four pars.

“We are excited,” exclaimed Jacksonville head coach Mike Blackburn. “These guys started back in August, we had some lofty goals and they worked their butts off and we’re thrilled. Couldn’t be happier. We’ve played a lot of hard golf courses with a number of good final rounds dating back to the Gator Invitational, where we finished second and I think that gave the boys a lot of confidence.”

The race for the individual title NCAA Baton Rouge Regional turned into exactly what many expected entering the week with Burns, the nation’s No. 2-ranked player, holding off Oregon’s No. 1-ranked Wyndham Clark by a single stroke after three round of play. Burns closed out the championship with a 3-over 75 for a winning 54-hole score of 4-under par 212.

Not only did Burns take home his fourth individual trophy of the season, but he also extended his impressive streak to 14-straight top-10 finishes in 14 appearances while posting a 69.77 scoring average.

“You have to ride the wave up and down,” Burns said. “I had a rough patch on my back nine today but that’s part of it. You have to keep your head down and stay focused. Anytime people come out to watch you don’t want to show them bad golf. It’s not fun for me, it’s not fun for them. Getting to come out here and getting a win on our home course in front of all the fans is really special for me.”

Burns also talked about the team’s mindset playing host to NCAA Regional play at the University Club and their responsibility to achieve more than a top-five team finish to qualify for the NCAA Championships.

“Coming into this week our goal wasn’t to finish in the top five, our goal was to win the golf tournament,” Burns shared. “I think with the experience we have on this course and the guys we have on this team, they are very talented and without them this wouldn’t be possible.”

Three Tigers cracked the Top 10 of the final leaderboard in the end as sophomore Luis Gagne earned his career-best seventh and senior Eric Ricard walked away with his fourth top-10 finish of the year. Gagne fired the team’s lowest round of the day with a 1-under 71 to finish just four shots behind Burns in a tie for third place with an even-par 216 for the tournament. Ricard tied for seventh individually with a final score of 3-over par 219 as he counted a 2-over 74 toward LSU’s team score of 6-over 294 in the final round.

Rounding out LSU’s counting scores on the day was freshman Philip Barbaree, who added a 2-over 74 of his own for his lowest round of the tournament to move into a tie for 24th place at 8-over par for 54 holes. Senior Brandon Pierce tied for 39th place in the final standings as he shot an 8-over 80 on Wednesday for a final score of 11-over par 227.

Teams advancing to the 2017 NCAA Division I Men’s Golf Championships will first play 54 holes of stroke play at Rich Harvest Farms Golf Club from May 26-28 while looking to make the first cut to the Top 15 teams. Each team making the 54-hole cut will then play a final round of stroke play on Monday, May 29, with the goal of advancing to the Match Play Eight for the national championship.