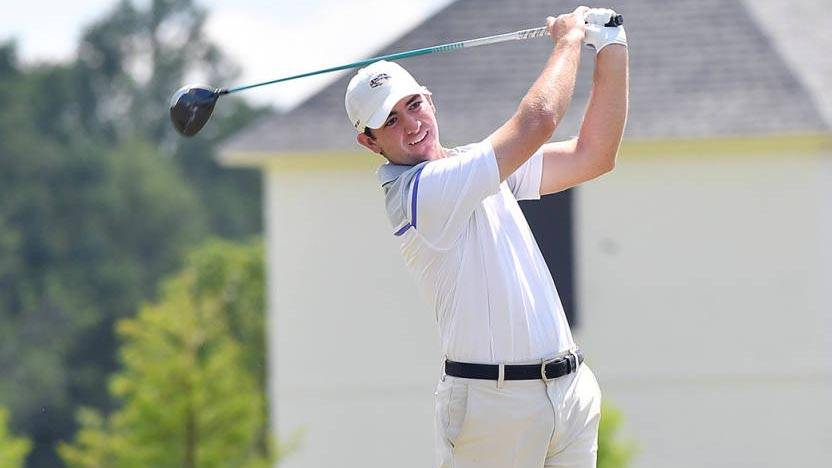 BATON ROUGE – The top-seeded LSU Tigers took another step toward their first ever regional championship Tuesday at the University Club as they wrapped up the second round of the NCAA Baton Rouge Regional seven shots clear of the field at the top of the standings with a two-day total of 4-under par 572.

The Tigers teed off Tuesday with a six-shot advantage thanks to their opening-round 12-under par 276 under unusually modest conditions at the University Club. They finished up the day as the only team in red figures at 4-under par for the tournament after posting 8-over 296 in the second round.

LSU sophomore Sam Burns extended his individual lead from two shots to five shots by the end of play as he followed a 7-under 65 on Monday with an even-par 72 on Tuesday to finish at 7-under par 137.

No. 5 seed Northwestern braved the blustery conditions at the University Club to make the biggest move of the day in the race for NCAA Championship qualification as the Wildcats climbed four spots up the standings into a tie for fourth place with No. 2 seed Oregon at 12-over par 588 for the week. Northwestern posted the second-lowest round of the day with a team effort of 1-over 289 to move into the Top 5.

The low round of the day went to No. 4 seed Duke as the Blue Devils improved their position by two spots as the second-place team through 36 holes with a two-day total of 3-over par 579. No. 3 seed Virginia rounded the par-72 course at the University Club in the second round with 10-over 298 to slip one spot into third place at 4-over par after opening the tournament with a first-round 6-under 282.

Each of the 14 teams at the NCAA Baton Rouge Regional are competing for five qualifying spots into the 2017 NCAA Division I Men’s Golf Championships to run May 26-31 at Rich Harvest Farms Golf Club in Sugar Grove, Illinois. Five will qualify from each of the six NCAA Regional sites across the country this week to make up the field of 30 teams at this year’s NCAA Championships.

Sure to challenge for an NCAA Championship berth are No. 8 seed Kentucky in sixth place at 13-over par and No. 7 seed Jacksonville in seventh place at 18-over par. No. 6 seed Arkansas sits eighth at 24-over par.

“We’ve been here a lot and seen what this golf course did today,” said LSU head coach Chuck Winstead. “Anytime you get double-digit winds out here and get the pin placements we see in tournaments out here the golf course can defend par almost as good as anywhere. What you see today is quality shots get rewarded. If you’re not on it doesn’t take much, there’s a bogey out there and that’s if you’re smart. If you’re not smart out here, you could turn it into a triple.”

With winds gusting to 10-15 mph for much of the day, the University Club struck back Tuesday as the average score rose by nearly one full stroke per man from Monday’s opener at the NCAA Baton Rouge Regional.

Just nine players finished the day at par or better on their round after the course surrendered 18 such scores in Monday’s regional opener. Chandler Eaton of Duke was the only player in the field to break 70 for Round 2 with the low score of the day at 3-under 69 to move 18 spots up the leaderboard into a tie for fourth place overall.

Alex Smalley, Eaton’s Blue Devil teammate, was the only player in the field to break par on both rounds as he equaled his 1-under 71 in the first with a matching score of 71 in the second to tie Oregon’s Wyndham Clark for second place at 2-under par 142. They finished the day five shots off Burns’ pace in the hunt for the individual title.

“Probably pushing 73, maybe even a little higher,” Smalley explained as to what par feels like at the University Club playing in conditions like Tuesday. “Because the course is firming up you could hit a good tee shot and it roll off. I had a few more birdies today. I birdied No. 10 and No. 11 and tried to hang on from there because it got kind of windy and the back nine plays a little tougher than the front.”

After tying the collegiate competitive course record with a 7-under 65 in the first round, Burns leveled four birdies with two bogeys and one double bogey in the second round to extend his lead to five shots at the top of the individual leaderboard. His score of 7-under par 137 tied for the second-lowest 36-hole score in a collegiate event since the University Club’s renovation in 2010.

A strong final round would hand Burns his fourth title in 14 events this season after also being crowned the co-champion of the David Toms Intercollegiate and taking the Sun Bowl Western Refining College All-America Golf Classic in the fall before winning the Louisiana Classics earlier this spring.

Burns, the No. 2-ranked player in the country in both the Golfstat and Golfweek individual player rankings, is also a strong contender to run his streak of top-10 finishes to 14 in those 14 starts this season.

Two other Tigers finished play Tuesday inside the Top 10 of the leaderboard as senior Eric Ricard and sophomore Luis Gagne tied one another for eighth place with matching 36-hole scores of 1-over par 145. Kentucky’s Cooper Musselman, Northwestern’s Ryan Lumsden and Oregon’s Edwin Yi also finished the day at 1-over par in a tie for eighth place overall.

Ricard, who teed off in a tie for third place following his opening-round 4-under 68, carded a 5-over 77 to slip back into a tie for eighth place eight shots behind Burns in the overall standings. Gagne added a 1-over 73 to his even-par 72 from the first round to position himself for a seventh top-10 finish for the 2016-17 season.

Also counting a score for the Tigers on Tuesday was freshman Philip Barbaree, who bounced back from being 5-over through 5 holes to play his final 13 holes at 2-under par. Barbaree carded his second-straight score at 3-over 75 to finish the day in a tie for 27th place at 6-over par 150 for the championship.

Senior Brandon Pierce finished the day on the cusp of the individual Top 10 in a tie for 14th place at 3-over par 147, including a 4-over 76 for his second round. Pierce opened with a 1-under 71 in Monday’s first round.

Golfstat will provide live scoring of the final round at the NCAA Baton Rouge Regional as fans can follow the action at http://www.golfstat.com. Fans can also join the conversation on social media in Baton Rouge and at other regional sites across the country using the hashtag #NCAAGolf.