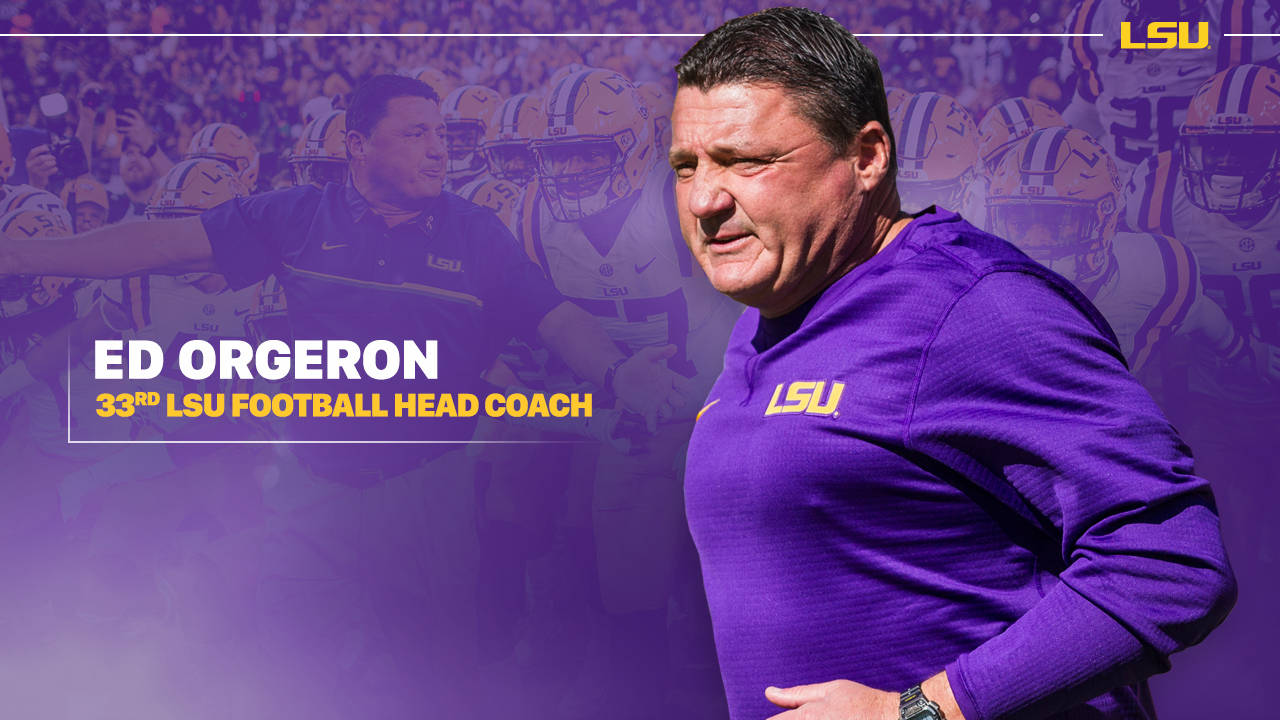 BATON ROUGE – Ed Orgeron, who led the Tigers to a 5-2 mark as interim coach over the past two months, has been named LSU’s head football coach, vice chancellor and director of athletics Joe Alleva announced on Saturday.

Orgeron, a native of Larose, Louisiana, becomes the 33rd head football coach in LSU history. Orgeron, who has also served as head coach at Ole Miss and Southern Cal, is 11-4 in his Past 15 games as a head coach, which includes a 6-2 mark as interim coach at USC.

“This is a great day for LSU and for all of Louisiana,” Alleva said. “We got our man and he’s been here all along. Coach Orgeron has demonstrated his ability to run this program with excellence, even under difficult circumstances. Coach ‘O’ earned this job.

“I worked closely with (LSU) President Alexander and board leadership throughout a very deliberate process. By the end of that process, our decision was clear. Coach Orgeron took us step by step through every aspect of his plans for this program and there was no question that he is the man to lead LSU football.”

Since taking over as interim coach of the Tigers on Sept. 25, Orgeron guided LSU to a 5-2 mark, beating four Southeastern Conference opponents – Missouri, Ole Miss, Arkansas and Texas A&M – all by double-digits. LSU’s two losses during that span came by a total of 16 points as the Tigers held top-ranked Alabama scoreless for three quarters and came up a yard short in falling to Florida, 16-10.

Defensively, LSU held opponents scoreless for 14 of 28 quarters under Orgeron and limited the opposition to an average of 10.3 points per game over the seven contests. With 39 points, Texas A&M became the only team to score more than 21 points against LSU this year. Overall, LSU’s defense, under Dave Aranda, ranks in the top three in the SEC in three major categories – scoring, total defense and rushing defense.

Orgeron originally joined the Tiger staff in 2015 as defensive line coach, before adding the title of recruiting coordinator in the spring of 2016.

In his first year with the Tigers in 2015, Orgeron’s defensive front served as a catalyst for a Tiger defense that ranked No. 3 in the SEC in both rushing yards (122.9 yards per game) and sacks (34). Six times in 2015 LSU’s defense help opponents to fewer than 100 yards rushing in a game, including limiting Mississippi State to 43 yards in the season-opener and Texas Tech to 29 in the Texas Bowl.

Prior to joining the LSU staff, Orgeron’s last coaching stop came at Southern Cal where he served as recruiting coordinator and defensive line coach for the Trojans for four years (2010-13). Orgeron was elevated to interim head coach at USC for the final eight games of the 2013 season, leading the Trojans to a 6-2 mark over that span.

He starred in football, basketball and track at South Lafourche High in Galliano, La. On the big screen, Orgeron played himself in the 2009 Oscar-nominated movie, “The Blind Side.”

Spread the word, “The state of Louisiana is first. It doesn’t matter the star, we are going to get him.” – Head Coach Ed Orgeron talking about recruiting. #GeauxTigers #AllforLSU

Wait wait wait hold the Press @Coach_EdOrgeron is the head coach at @LSUfootball !!!!! I’m pretty Hype about this one!! #Thebigswaguapproves

We couldn’t be happier that @Coach_EdOrgeron will be the head coach of the Fighting Tigers! @LSUfootball pic.twitter.com/0Ol0MAvsEt

You sir, are a class act. #God bless you! @Coach_EdOrgeron #LSU @lsu @LSUfootball

So happy for @LSUfootball
Some games are won with talent, others with heart. @Coach_EdOrgeron has no shortage of either. #geauxtigers

Congrats @Coach_EdOrgeron you deserve it!!! Fight ON

Congrats to Ed Orgeron..worked for me at the U…a good man and will. E good for LSU

LSU just got better #respect and congrats to Ed Orgeron on the new job one of my favorite coaches of all time! 👏🏾👏🏾👏🏾👏🏾

Happy for Ed Orgeron..never met anyone who works harder. He’s a lot more than just a great recruiter. He’s evolved so much since OM and USC

Congrats to Ed Orgeron as head coach for #LSU Tigers. Well earned and deserved. Great program over there. #SEC

Congrats @Coach_EdOrgeron! I look forward to meeting you

with all due respect to the other coaches around the country. We have our head coach who is Louisiana born and raised @Coach_EdOrgeron
part2

Ran into Coach O this morning before I was going to get a workout in. He made my dream come true by starting at LSU now his came true! #LSU pic.twitter.com/dcGyX07Ir9