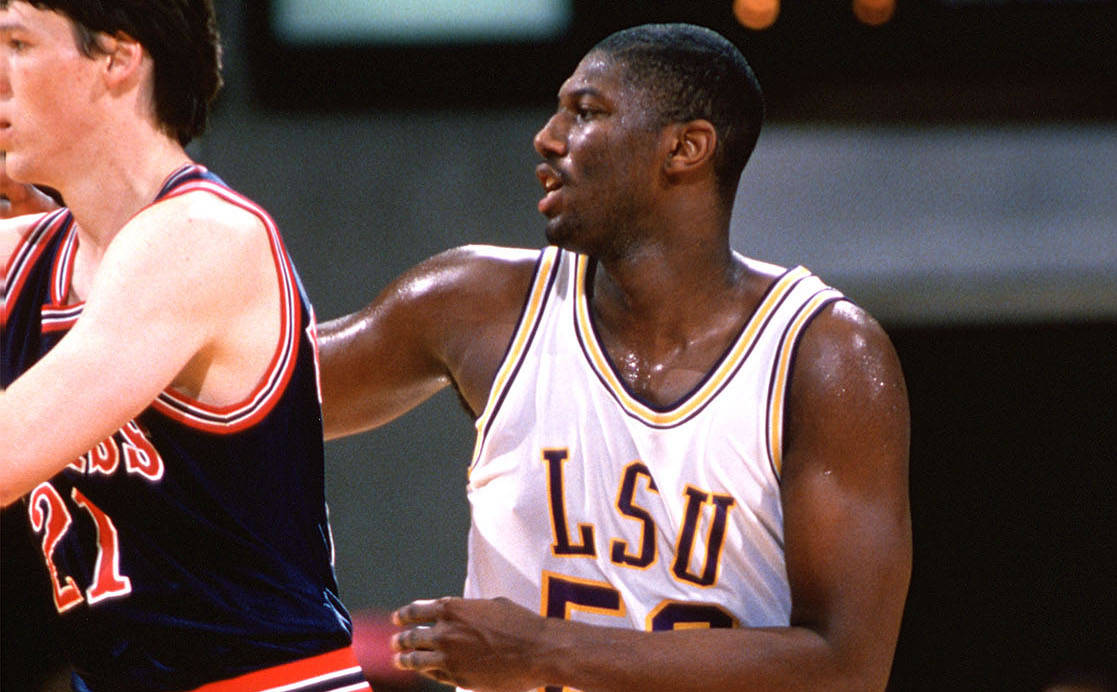 BATON ROUGE – LSU center Stanley Roberts, whose inspirational story of returning to LSU to graduate at the age of 42, has been named the LSU legend in the 2016 class of Allstate SEC Basketball Legends announced on Friday.

Roberts and the 13 other Legends will be honored at the SEC Men’s Basketball Tournament at Bridgestone Arena in Nashville.

Each SEC Basketball Legend will be recognized at halftime of his institution’s first game at the tournament. Highlighting the schedule of events at the Sunkist Soda SEC FanFare will be appearances by selected legends. FanFare will be open Thursday-Saturday, March 9-12.

This marks the 18th year of the SEC Basketball Legends program.

Roberts averaged 14.1 points and 9.8 rebounds in his one season at LSU in 1989-90. He helped the Tigers to a 23-9 overall mark and the second round of the 1990 NCAA Tournament. Following his college career, he was drafted in the first round (No. 23 overall) by the Orlando Magic in the 1991 NBA Draft where he went on to play eight seasons in the NBA. After a long and winding professional career, he returned to Baton Rouge in 2007 and went back to school, graduating from LSU in December of 2014 at the age of 42.

Here are the capsules on the other legends:

Ennis Whatley earned NABC Second Team All-America honors in 1983 after averaging 15.2 points per game and helped the Tide make an appearance in the SEC Championship game and the NCAA Tournament. Whatley’s biggest weapon was his passing ability as he set the school record for single-season assists with 220 – a number that still ranks second-best in Alabama history. He still owns the school record or career average assists per game at 6.32. Whatley was one of 14 Alabama players to be a first round NBA Draft pick after his selection in the 1983 Draft.

Jack Stewart was Auburn’s first All-American in 1932 by College Humor magazine as he was a second-team selection as the University was then called Alabama Polytechnic Institute. Purdue’s John Wooden was a first-team All-American that season. A three-year letterwinner in basketball from 1930-32, it was written that Stewart “finished the 1932 season as one of the high scorers in Dixie, was a remarkable floor man and a great defensive player.”  He lettered in three sports at Auburn – basketball, football and track. Stewart was roommates with Ralph Jordan and close friends on campus with Jeff Beard and Joel Eaves and Wilbur Hutsell was his track coach Each of them are some of the most honored and respected men in Auburn history.

A starter on Florida’s back-to-back national championship teams, Lee Humphrey holds the all-time record for 3-pointers made in the NCAA Tournament (47, including 18 in two Final Fours). Florida’s all-time leader in 3-point field goal percentage (.444, min. 150 att.), Humphrey ranks 2nd in UF history in 3s made (288) and has two of the top three single-season 3-point totals in school history (113 in 2005-06 and 2006-07). Humphrey was a two-time SEC Scholar-Athlete of the Year and was named ESPN The Magazine Academic All-America in 2006 & 2007.

Jarvis Hayes was one of the SEC’s most electrifying players in the early 2000s. Hayes joined Dominique Wilkins to become just the second Bulldog to earn consensus first-team All-SEC honors two times. A native of Atlanta, Hayes and his twin brother Jonas transferred to Georgia after playing at Western Carolina as freshmen. Jarvis took the SEC by storm as a sophomore, earning SEC Newcomer of the Year honors from the AP after averaging a league-best 18.6 points per game in 2001-02. Hayes again led the Bulldogs offensively in 2002-03 while averaging 18.3 points per game and reached 1,000 career points in just 55 games, six games quicker than UGA’s career scoring leader. Hayes helped Georgia to on-court records of 22-10 – and a 2002 NCAA Tournament bid – and 19-8 during his two seasons in Athens. Hayes was selected by the Washington Wizards with the No. 10 overall pick in the first round of the 2003 NBA Draft and went on to play seven seasons with Washington, Detroit and New Jersey, as well as two seasons internationally in Italy and Romania.

A key member of the 1965-66 “Rupp’s Runts,” one of the most beloved teams in Kentucky basketball history, Larry Conley helped lead the Wildcats to a 1966 national runner-up finish, a 27-2 record and a Southeastern Conference championship. On a starting five that featured no player taller than 6-foot-5, Conley dished out a team-best 100 assists while averaging 11.5 points per game. Conley was named to the All-SEC First Team by the league’s coaches in 1966 for his efforts and the All-SEC Third Team by the Associated Press. Conley was also an All-SEC Third Team selection in 1964 and 1965, a two-time Academic All-SEC selection, and an Academic All-American during the 1963-64 season. A member of the University of Kentucky Athletics Hall of Fame, Conley went on to play a season in the American Basketball Association for the Kentucky Colonels before diving into a longtime and ongoing broadcasting career. He’s called games for ESPN, NBC, CBS, ABC, Fox Sports and Raycom Sports.

Stanley Roberts averaged 14.1 points and 9.8 rebounds in his one season at LSU in 1989-90. He helped the Tigers to a 23-9 overall mark and the second round of the 1990 NCAA Tournament. Following his college career, he was drafted in the first round (No. 23 overall) by the Orlando Magic in the 1991 NBA Draft where he went on to play eight seasons in the NBA. After a long and winding professional career, returned to Baton Rouge in 2007 and went back to school, graduating from LSU in December of 2014 at the age of 42.

One of the most exciting players in college basketball history, Johnny Neumann electrified crowds in Oxford and across the Southeast in his one season at Ole Miss and left his marks in the record books that might never be touched. Neumann led the nation in scoring as a sophomore at 40.1 points per game and was named to several 1971 All-America squads. The SEC Player of the Year, Neumann holds the Ole Miss single-season scoring record with 923 points. Off the court, he received Academic All-America and Academic All-SEC accolades. He left Ole Miss after the 1971 season to play for the ABA Memphis Tams. His professional career also included stints in Indiana, Los Angeles and Utah, and he has played or coached overseas including serving as a head coach in China, Greece, Israel and Japan.

A three-year letterman for the Bulldogs, Mario Austin’s illustrious career saw him score 1,199 points and grab 570 rebounds in just three seasons. His teams won 66 games, the 2002 SEC Tournament in New Orleans and a Western Division crown in 2003. He became MSU’s first All-American in eight years when he earned the honor in 2003, and twice he was tabbed All-SEC. He currently ranks 25th all-time in MSU history with 1,199 point. For his career, he averaged 13.2 points and 6.3 rebounds while shooting 53.1 percent from the floor.

Devan Downey ranks fourth on the South Carolina all-time scoring list with 1,901 career points, a mark he achieved in just three seasons.  Downey was a three-time first-team All-SEC performer by the Associated Press and Coaches and earned Honorable Mention All-America honors in 2009 and 2010.  He was also a two-time SEC All-Defensive team selection in 2009 and 2010.  He was elected to the South Carolina Athletics Hall of Fame in the summer of 2015.

Cleveland, Tenn., native Vincent Yarbrough starred for the Volunteers from 1998-2002 and finished his career as one of UT’s 10 most prolific scorers as well as the program’s all-time steals leader. The 6-foot-7 forward twice earned second-team All-SEC honors before garnering first-team status as a senior in 2002. No Vol has logged more than Yarbrough’s 211 career steals, and he ranks ninth on Tennessee’s all-time scoring list with 1,737 career points. He also ranks among the school’s all-time top 10 in rebounding (seventh, 862), field goals made (10th, 613), 3-pointers made (seventh, 179) and blocks (seventh, 131). The Denver Nuggets selected Yarbrough in the second round of the 2002 NBA Draft, and he enjoyed a successful pro basketball career until retiring in 2010.

Texas A&M’s only two-time All-American, Carroll Broussard starred for the Maroon & White from 1960-62 earning Southwest Conference Player of the Year accolades in 1961. A native of Port Arthur, Texas, Broussard led the SWC and ranked 26th nationally in scoring when he averaged 22.4 points per contest in 24 games played for A&M head coach Bob Rogers. After earning All-SWC honors during each of his three seasons in Aggieland, Broussard was drafted by the NBA’s Chicago Zephyrs.

Shan Foster left Vanderbilt as the program’s all-time leading scorer with 2,011 points, the only player in Commodore history to eclipse the 2,000-point mark.  He also is the program’s leader in 3-pointers made in a career with 367, which is second all-time in the Southeastern Conference, and made 134 3s in his senior season in 2007-08, which is tied for the second-best total in SEC history.  In his senior season, he was named a consensus All-American, and was also awarded the Senior CLASS Award, which goes to the nation’s top senior athlete who excels in the community, in the classroom, in character and in competition.