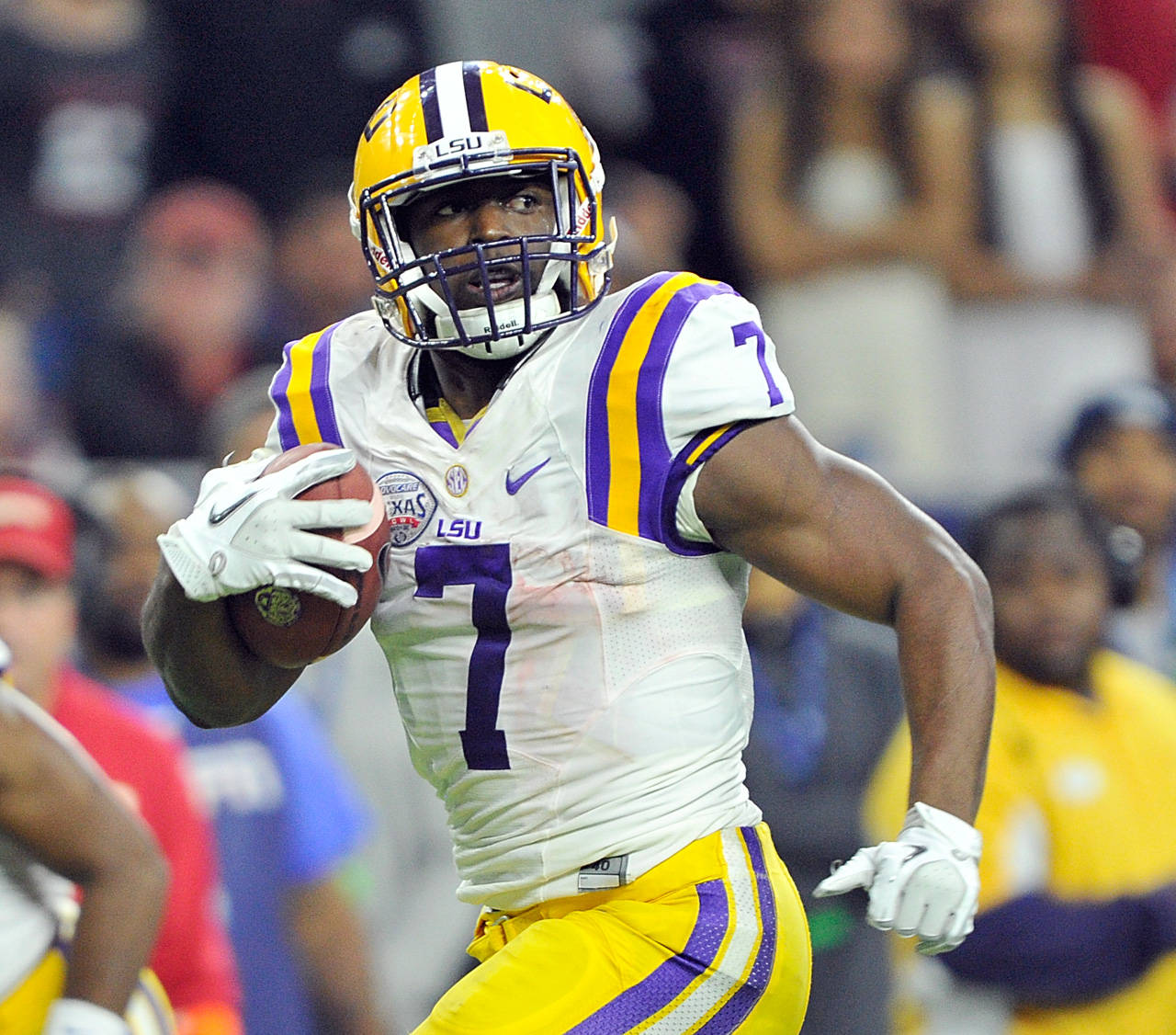 Editor’s Note: LSU’s passing and rushing statistics were adjusted following the publication of this article, as a reverse was corrected to be a pass from Brandon Harris to Derrius Guice and then a lateral to D.J. Chark. Additionally, a penalty on a kickoff and a reception for TTU were corrected. Please view the updated box score for accurate stats.

The sophomore Heisman hopeful, whose individual-award opportunities faded during a three-game Novemeber losing streak, set LSU’s bowl scoring record with 30 points while the Tigers total of 56 was its all-time high in the postseason.

Fournette was named the Most Valuable Player after gaining 256 all-purpose yards. His touchdown runs spanned 2, 43, 4 and 2 yards, while also earning his first career touchdown reception from 44 yards.

LSU (9-3), which never trailed, amassed 638 yards of total offense – a program bowl record and sixth-most in school history – including 384 rushing and 254 passing from quarterback Brandon Harris. The Tigers led 21-20 early in the third quarter but responded with three-straight touchdowns including a pair by Fournette and a 26-yard run by Harris to put the game out of reach before the fourth quarter.

Harris was 13-of-22 passing with the touchdown to Fournette and one interception. Malachi Dupre had a team-high 96 receiving yards on four catches, while John Diarse added four catches and 45 yards. Trey Quinn had a 46-yard reception that setup one of Fournette’s scores.

Mahomes led Texas Tech, completing 28-of-56 passes for 370 yards and four touchdowns with one interception at the LSU goal line. Wide receiver Jakeem Grant caught three of the touchdowns from 46, 3 and 4 yards. He had 10 catches for 125 yards.

Linebackers Deion Jones and Kendell Beckwith each had eight tackles for LSU, while combining for 3.5 sacks and six tackles for loss. Tackle Davon Godchaux added two sacks and a forced fumble. LSU held the nation’s second-ranked offense nearly 200 yards below its season average of 594.5.

Texas Tech won the coin toss and elected to receive the opening kickoff. A 5-yard sack of Mahomes by defensive tackle Davon Godchaux on the first play from scrimmage set the tone for a quick three-and-out by the Tigers defense.

LSU took over at its 34 and used Fournette for three-straight that netted 38 yards to the Red Raiders 28. The sophomore running back then threw a pass to Malachi Dupre, who was interfered with while trying to make the grab inside the 5-yard line. On second down from the 13, Harris completed an 11-yard pass to Dupre to setup first-and-goal at the 2. Fournette powered for his LSU record-tying 19th rushing touchdown this season.

A tripping penalty on Texas Tech put the Red Raiders behind the chains on its second drive, and LSU linebacker Kendell Beckwith finished off the strong defensive start with a 13-yard sack. A 57-yard punt by Taylor Symmank gave LSU possession at its 30.

The Tigers crossed midfield with a first-down catch-and-run by Derrius Guice for 10 yards and a 5-yard run by Fournette.

However, a third-and-3 run went for no gain and Jamie Keehn entered to punt for the first time. His 36-yard effort pushed Texas Tech to its 10, where Mahomes started a nine-play, 90-yard scoring drive that ended with a 46-yard touchdown catch by Grant. A try for two points fell incomplete and LSU kept a 7-6 lead with 53 seconds left in the first quarter.

Following a 21-yard kickoff return by Guice, sophomore wide receiver D.J. Chark took his first touch as Tiger on an end around for 79 yards and a touchdown.

Seventeen seconds after allowing a Texas Tech score, LSU extended its lead to 14-6.

Early in the second quarter, the Red Raiders used a personal foul to enter LSU territory. However, a false start stalled the drive and led to a punt from the LSU 42.

Keehn’s punt was caught by safety Jamal Adams at the TTU 5, where the Red Raiders went three-and-out. Tre’Davious White returned a 53 yard punt 16 yards to the Texas Tech 42.

On second-and-12 following a holding penalty, Harris found Fournette on a screen pass and the speedy LSU single-season rushing record holder took it 44 yards for a touchdowns.

The Tigers took the margin into the lockerroom.

With LSU receiving the kickoff, the teams traded punts on the first two drives of the second half.

On LSU’s second drive of the game, Harris’ third-and-10 pass was intercepted in front of tight end Colin Jeter at the LSU 31.

On third-and-10, Mahomes took advantage of a free play when LSU jumped offsides. Reginald Davis came down with a 31-yard touchdown catch. The PAT reduced LSU’s lead to 21-20 with 10:28 left in the third quarter.

LSU’s attempt to answer the score started 30-yard third-down pass by Harris to wide receiver John Diarse to the Red Raiders 43 and quickly ended on the next play. Fournette darted untouched for a touchdown that moved the Tigers’ advantage to 28-20 with 8:17 remaining in the third quarter.

Texas Tech looked to get the score back quickly, advancing from its 14 to the LSU 16 before safety Rickey Jefferson intercepted a pass deflected by White at the goal line and returned it to the TTU 22-yard line to change the momentum of the game.

The Tigers overcame an offensive pass interference penalty and first-and-21 with a 39-yard pass from Harris to Dupre. From midfield, Harris connected on another long pass to wide receiver Trey Quinn. The 46-yard pass setup a 4-yard touchdown run by Fournette, his fourth score of the night.

Sacks of Mahomes by Beckwith and defensive end Tashawn Bower forced a three-and-out by Texas Tech. A 58-yard punt was returned 13 yards by White, where LSU took over at its 36.

Fournette moved past 1,900 yards rushing on the drive with a 21-yard run to the Texas Tech 26. On the next play, Harris kept it for a 26-yard touchdown and a 42-20 lead with 9 seconds remaining in the third quarter.

The Red Raiders completed an eight-play, 61-yard touchdown drive that ended in Grant’s third touchdown of the game. The 4-yard catch momentarily cut the lead to 25, 42-27, with 12:20 to play.

Fournette’s fifth touchdown of the game came at the end of a 65-yard drive by the Tigers. It was setup by a 32-yard pass from Harris to Dupre. On third-and-goal from the 2, Fournette leaped over the goal line to give LSU its largest point total in its bowl history. With 8:16 to play, LSU led 49-27.

The announced crowd of 71,307 was a Texas Bowl record.