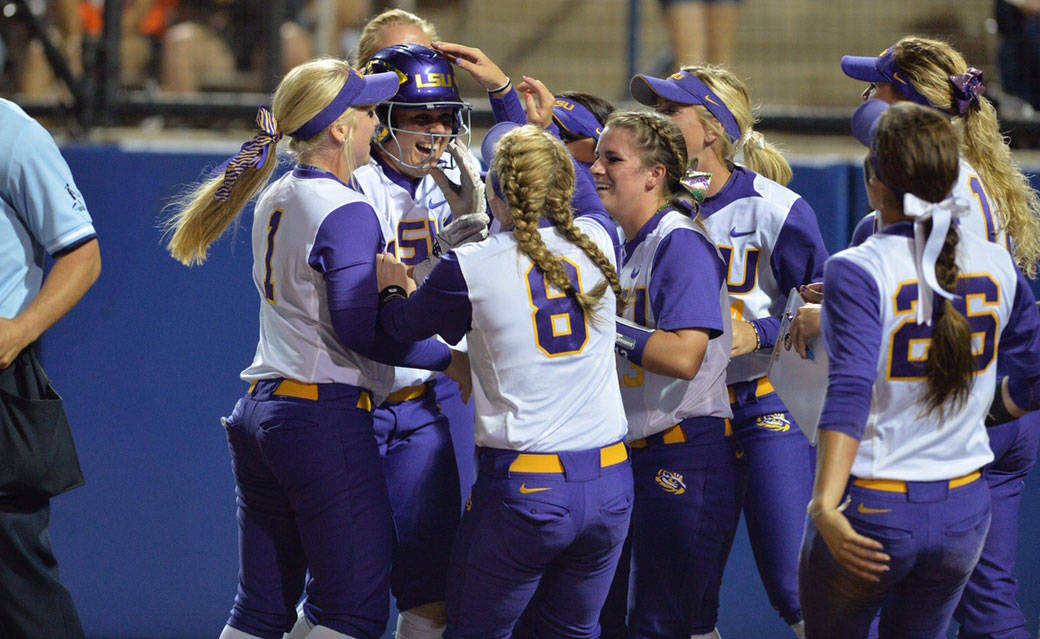 OKLAHOMA CITY, Okla. – Looking to extend its stay at the 2015 Women’s College World Series, the No. 8 LSU softball team scored all of its runs over the course of the first two innings and held off a late threat by No. 5 Alabama to earn a 5-3 win over the Crimson Tide to advance to the Sunday’s semifinals at ASA Hall of Fame Stadium – OGE Field.

LSU (52-13) was efficient at the plate against Alabama (48-15), needing just seven hits to score all five of its runs on the night, while corralling the Crimson Tide offense for much of the game until getting the opposition to succumb late to hold on for the victory.

Bailey Landry led LSU at the plate on the night, going 2-for-3 with two RBIs and a run scored, getting RBI hits from Sahvanna Jaquish and Kellsi Kloss to help accentuate the Tiger offense. In all, six of LSU’s nine batters earned hits on the day, coming from various parts of the lineup and much of the runs coming with two outs on the board.

Allie Walljasper (16-5) was strong in the circle for LSU, pitching six solid innings as she gave up three runs on six hits with a walk, as Carley Hoover (5) came in to earn the save and tie the single-season saves record in the process, pitching the final inning with a walk and a strikeout.

Sydney Litlejohn (16-2) suffered the loss as she allowed all five runs, four earned, on five hits with two walks and a strikeout in three innings, as Leslie Jury came on in relief and pitched the final three, allowing two hits with four strikeouts and a walk. Marisa Runyon led Alabama at the plate going 2-for-4 with an RBI

As the visitors for the contest, Alabama took to bat first and drew a walk to take first. After the runner advanced on a wild pitch, a fly out and grounder to short put two outs on the board, but the runner was now at third as a two-out single through the right side put the first run on the board in favor of Alabama at 1-0.

After a strikeout Landry singled to dead center to reach first, but it looked like she was going to be stranded after a fly out to second. Still, she stole second and that proved huge as Jaquish drove her in on a single, while advancing to second on the throw to tie the game at 1-1. Kloss followed up with a double to center, easily scoring Jaquish to tie the game, but an error on a throw to second sailed and allowed Kloss to round third and come home to make it 3-1 after one.

Constance Quinn earned a walk to lead off the bottom of the second inning, as a sacrifice bunt by Sydney Bourg advanced her to second. An infield single by Emily Griggs put runners at the corners for LSU, as another infield grounder put two in scoring position. Those moves paid off as Landry ripped a single to right to score both to make it 5-1.

After some fruitless innings for both sides, Alabama started to put together a run in the sixth as an error and a single to center put two on for the Crimson Tide. Fortunately, Walljasper buckled down and got the next two batters to fly out to left, and the final batter to pop up to short to end the threat and maintain the lead.

Alabama was down to its final three outs in the top of the seventh, as consecutive hits put two Tide runners on base as Hoover came on in relief for the save opportunity. She got a strikeout for the first out, but a wild pitch advanced runners to second and third. A walk loaded the bases for Alabama, as a sacrifice fly brought in a run to make it 5-2, with a wild pitch making it 5-3. LSU closed the door on the next batter with a grounder to Sandra Simmons to end the game and send LSU to the semis.

LSU now moves on to take on the Michigan Wolverines at 2:30 p.m. Sunday in Oklahoma City. If the Tigers win they would force an if-necessary game to advance to the Women’s College World Series Championship best-of-three series.