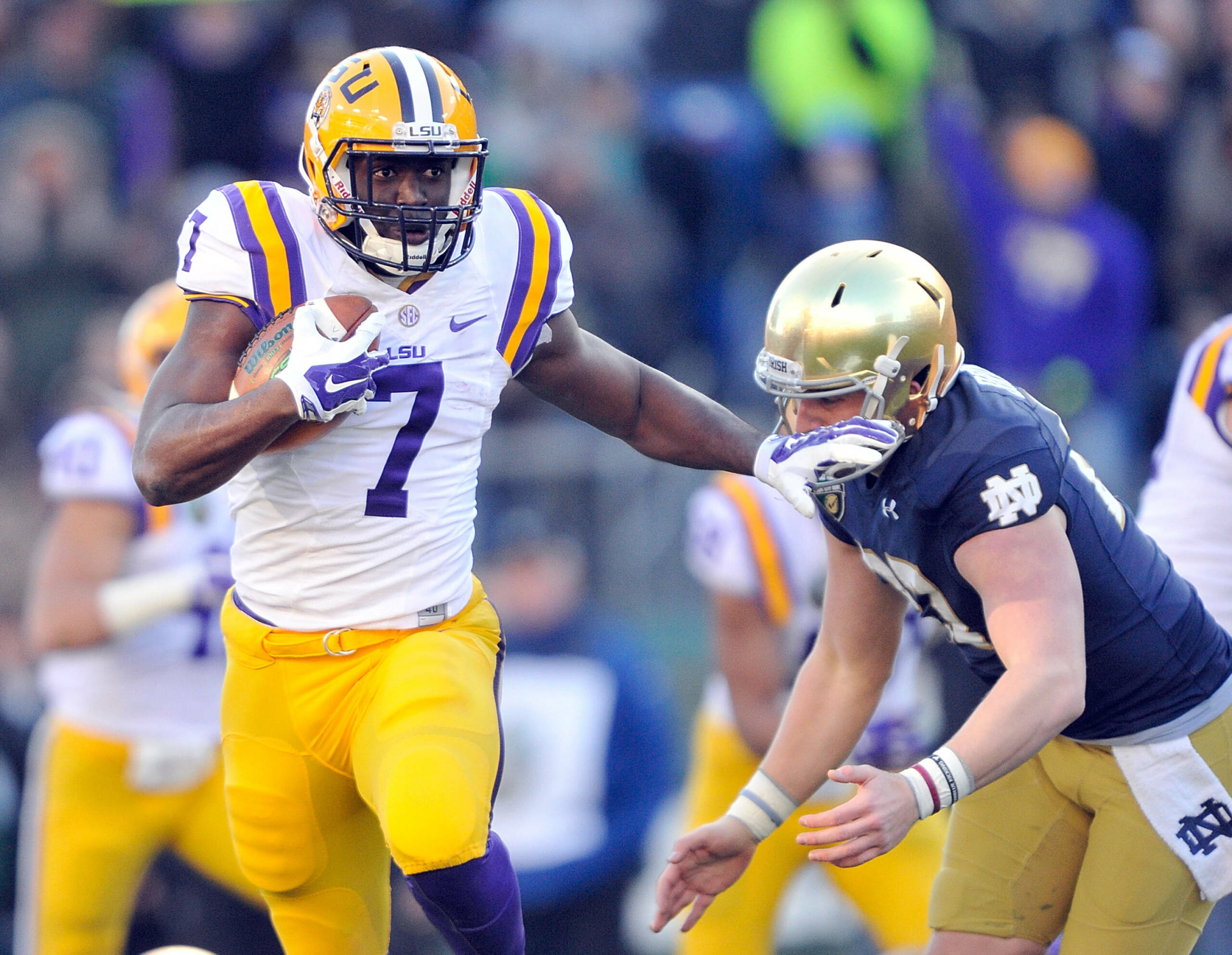 NASHVILLE, Tenn. — LSU’s Leonard Fournette had 143 rushing yards with two touchdowns and added a 100-yard kickoff return for a touchdown, but Notre Dame broke a tie with a 32-yard field goal with 4 seconds to play to win the Music City Bowl, 31-28, on Tuesday at LP Field.

LSU (8-5) took its first lead, 28-21, late in the third quarter when Fournette broke off a Music City Bowl and LSU bowl-record 89-yard touchdown run. However, Notre Dame (8-5) answered on its following possession with a 50-yard touchdown run that tied the game until the final seconds.

The Irish blocked LSU’s 40-yard field goal attempt with just less than 12 minutes left in game and later put together a 14-play, 71-yards drive to win the game.

Along with the missed field goal, LSU fumbled in Notre Dame territory midway through the third quarter and had a fake field goal ruled to be down inches short of the goal line near the end the first half.

Following a dramatic ending to the first half, LSU wide receiver John Diarse tied the game at 21-21 with a 75-yard catch and run for a touchdown on the first play of the third quarter.

LSU quarterback Anthony Jennings was 7-of-14 passing for 151 yards with the touchdown to Diarse. Tight end DeSean Smith had his first catches of the season and finished with four grabs for 66 yards. Though he didn’t catch a pass, wide receiver Travin Dural had four rushes for 61 yards.

The story of the game, however, was the Tigers inability to get off the field on third down and contain Notre Dame quarterback Malik Zaire. Zaire, along with backup Everett Golson, converted 11 of 17 third downs and held the ball for 37 minutes.

Zaire led the Irish with 22 carries for 96 yards with a touchdown and added 96 more through the air on 12-of-15 passing. Golson completed 6-of-11 passing for 90 yards.

Running back Tarean Folston ran 21 times for 73 yards with a touchdown, while wide receiver C.J. Prosise ran three times for 75 yards including his 50-yard game-tying touchdown in the third quarter. Will Fuller had Notre Dame’s only touchdown reception and finished with team highs of five catches for 57 yards.

Notre Dame won the coin toss and elected to receive the opening kickoff from LSU, as the Tigers chose to kick from the north toward the south with the wind to its back in the opening quarter.

After a short kick by Domingue was returned nine yards to the 34, the Fighting Irish picked up the first of three third downs with a 7-yard pass from Zaire to Prosise along the left sideline to the Notre Dame 45. Folston added two more first downs with runs of 9 and 3 yards to the LSU 29. After LSU linebacker Kendell Beckwith stuffed Prosise for a 2-yard loss on third-and-7, the Irish elected to bypass a 45-yard field goal attempt into the wind and Zaire gained 10 yards on a scramble to his left to the LSU 18. Two plays later, Zaire threw a short pass to Fuller who ran for the 12-yard touchdown to complete the 15-play drive.

Fuller, who tied the Notre Dame single-season record with his 15th touchdown reception, gave Notre Dame a 7-0 lead with 7:04 remaining in the opening quarter.

A quick three-and-out by the Tigers offense was followed by a 49-yard punt by Jamie Keehn to Notre Dame’s Will Fuller, who was hit immediately by LSU safety Jamal Adams at the Irish 18.

Runs of 26 yards by Zaire and 27 by Prosise moved Notre Dame into LSU territory at the 29. However, the Tigers responded with tackles for loss by defensive end Jermauria Rasco and Adams, who stopped Zaire at the LSU 24 on fourth-and-1 to turn the ball over to LSU.

The defensive stop brought the Tigers’ offense to life, as running back Darrel Williams ran for 13 yards on second-and-5 to the LSU 42. On second-and-7 from the 45, Dural crouched to the right of center next to Jennings. As Jennings took the snap, he quickly handed to Dural and ran to the right as Dural ran around the left end for 24 yards to the Notre Dame 31. Fournette added 18 yards on a run to the left and five more to the 8. On third-and-5 from the 8, Fournette took a pitch from Jennings and ran for the touchdown.

With five seconds remaining in the opening quarter, LSU tied the game at 7-7.

Alternating quarterbacks on the ensuing drive, the Irish were able to re-take the lead by gaining yardage in large chunks. Folston gained 11 yards with a run to his 46 and Chris Brown gained 29 yards on a pass from Golson to the LSU 23. After picking up third-and-2 with a 8-yard run to the LSU 7, Zaire scored on the next play to put the Irish ahead, 14-7, with 11:04 left in the first half.

However, the lead didn’t last long, as Fournette took the kickoff at his goalline and returned up the middle for a 100-yard touchdown. The NCAA-record return and Domingue’s PAT tied the game at 14-14 with 10:52 left in the half.

With a bit of luck, Notre Dame was able to regain its lead on its next possession. On third-and-7, Golson lofted a prayer in the direction of Fuller, who was able to get back to the ball for an 11-yard catch at the LSU 26. A 17-yard catch by Fuller on third-and-11 to the LSU 10 kept the drive alive, and Folston scored two plays later with a 6-yard touchdown run.

The Tigers put together a long drive to end the half and appeared to cut into the Irish lead if not tie the game in the closing seconds before being turned away at the goal line.

Starting from its 25, Dural took a handoff for nine yards and Fournette got the first down with four more to the LSU 38. A 17-yard catch by Smith and an 8-yard reverse by Diarse put the Tigers at the Notre Dame 37. Runs of 6 and 14 yards by Magee moved the chains twice. On third-and-5 from the Irish 11, Williams gained six to setup first-and-goal with 30 seconds left in the half. Jennings lost two yards on a sack before gaining four back on a scramble to the 3-yard line. On third-and-goal, Diarse made a 1-yard grab, and LSU sent its field goal unit on the field with seven seconds remaining. Instead of playing the ball, holder and reserve quarterback Brad Kragthorpe took the snap around the left end, ran into Magee on his way and jumped toward the goal line. He was ruled down short and the endzone, though video and still shots appear that he broke the plane prior to the ball touching the ground.

On the first play of the third quarter, LSU continued its quick-strike offense. Jennings faked a handoff, pulled up and found Diarse behind the Irish defense at the LSU 45. The receiver did the rest, completing a 75-yard touchdown reception that tied the game at 21-21 with 14:46 left in the third quarter.

After gaining two first downs, Notre Dame punted for the first time in the game from the LSU 40.

Starting from its 9, LSU found its offensive rhythm and crossed into Notre Dame territory with a 15-yard run by Dural and a 21-yard catch by Smith to the Irish 49. Two plays later, Jennings attempt to pull back a read-option run that was in Fournette’s hands, creating a fumble that was recovered by Notre Dame defensive lineman Sheldon Day at the Irish 45.

The Tigers came up with another defensive stop when Golson threw consecutive incomplete passes, leading to a 41-yard punt to the LSU 11.

Again on the first LSU play, Fournette took a handoff from Jennings through the left side of the line and broke free for an 89-yard touchdown run. The longest run in LSU’s bowl history put LSU ahead for the first time, 28-21, with 6:14 remaining in the third quarter.

Notre Dame came back immediately, striking for a 50-yard touchdown run by Prosise that tied the game at 28-28 with 4:15 left in the quarter.

After the teams traded punts, LSU used a 13-yard run by Dural and a 21-yard catch by Smith to advance into the Irish side once again at the 42. Kenny Hilliard added runs of 7 and 4 yards for first downs to the 31, however, Magee’s third-down run of nine yards came up short of the first down. Domingue’s 40-yard field goal attempt was blocked by Notre Dame’s Isaac Rochell and returned six yards by Cole Luke to the Notre Dame 33.