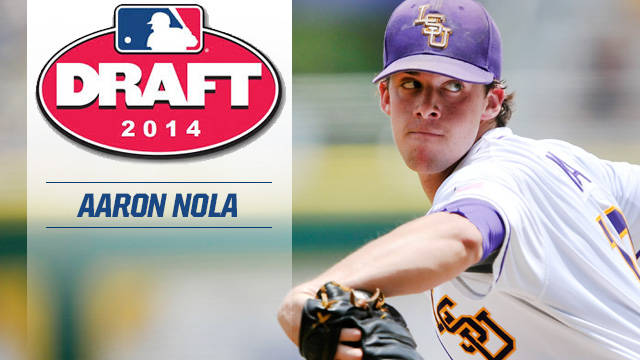 Nola, a 2014 Golden Spikes Award finalist and a two-time SEC Pitcher of the Year, became the third-highest draft choice in LSU baseball history, and he was the 17th LSU player to be chosen in the first round.

The first and second rounds of the 2014 draft will be completed Thursday night. The draft continues at Noon CT Friday with Rounds 3-10 and concludes with Rounds 11-40 beginning at Noon CT Saturday.

The selection of Nola marks the fifth time in six seasons an LSU player has been chosen in the first round of the MLB Draft. Outfielder Jared Mitchell was the 23rd overall selection in 2009 by the Chicago White Sox, pitcher Anthony Ranaudo was the 39th overall choice in 2010 by the Boston Red Sox, outfielder Mikie Mahtook was the 31st overall selection in 2011 by the Tampa Bay Rays, and Gausman was the fourth overall choice two years ago by the Orioles.

Nola was the 22nd-round selection of the Toronto Blue Jays in 2011 after his senior season at Catholic High School in Baton Rouge; however, he elected to enroll at LSU instead of signing a pro contract.

Nola is the second-highest drafted player produced by Mainieri in his 32-year collegiate career, behind only Gausman. While at Notre Dame, Mainieri coached pitcher Brad Lidge, the No. 17 overall choice (Houston Astros) in the 1998 draft, and pitcher Aaron Heilman, the No. 18 overall selection (New York  Mets) in the 2001 draft.

“My heart has never beaten so fast in my life. I’m glad everything has been lifted off my shoulders, and I’m excited to go wherever they send me. It means so much to be a part of the Philadelphia Phillies organization. They have such a great history. Everyone knows Roy Halladay, one of the Phillies’ great pitchers. I’m excited to work with the staff and meet a lot of new people.

“I am so glad I had the opportunity to come to LSU. It had been a dream of mine. I got to play under the best coaching staff in the country. Alan Dunn is the best pitching coach in the country, and I can’t thank them enough. I’m ready to take that next step now.

“I’m so grateful to the fans, coaches and my team. I thank everybody for making it so special. It has been such an unbelievable experience. I couldn’t imagine going to any other school. I’m so glad I came to college to be a part of this program. My teammates have been so good to me. It has been a blessing to be at LSU.”

“It was such a privilege to coach Aaron Nola. He is as fine of a pitcher that I’ve coached in my 32 years. He was everything you wanted in a pitcher. You gave him the ball and he goes out and competes as hard as he can every night. The consistency of his performance from week to week can’t be matched. He constantly met the challenges and got better. He gave you everything he had.

“He had the best control of any pitcher I’ve been around. On top of that, he had the intangibles. He had a little something extra that allowed him to raise his game to something a little extra when he needed to the most. He started 16 games this year and we won 15 of them. It’s going to be impossible to replace a guy like that. I’m very proud of his career at LSU. He represented this team and this state with such class. I wish him well. He’ll be playing in the big leagues very soon.”