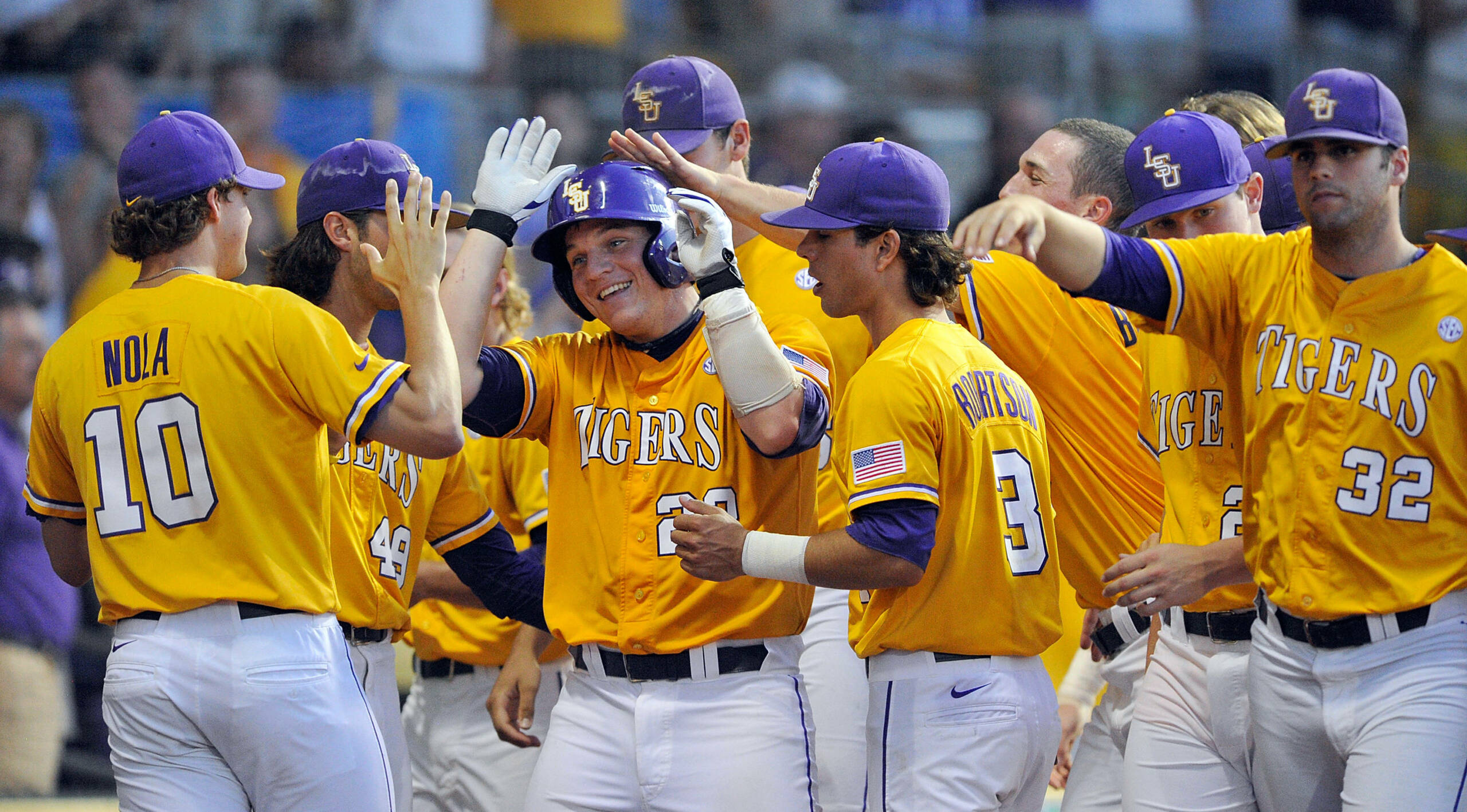 BATON ROUGE — Houston rightfielder Kyle Survance drove in the go-ahead run with two outs in the top of the 11th inning, as the Cougars rallied from a 4-0 deficit to force a deciding game in the NCAA Regional, 5-4, late Sunday.

The teams will square off at 7 p.m. CT on Monday at Alex Box Stadium, Skip Bertman Field. The game will be streamed live on ESPN3 and broadcast on the LSU Sports Radio Network starting at 6:30.

Behind a solo home run by LSU catcher Kade Scivicque to leadoff the second inning, LSU took a 1-0 lead to the bottom of the seventh when the game intensified.

Conner Hale started the inning with a single off Houston reliever Jared West before Moore lined a 3-1 pitch just inside first base, past the tarp in foul territory and up against a padded gate in the corner of the field. Rather than attempting to dislodge the ball, Survance raised his hands indicate that the ball was stuck. Meanwhile, Hale came around the score and Moore never stopped, completing an inside-the-park home run.

Houston protested the ruling, thus sending the umpires off the field to review the play. The play was upheld by the established ground rules and the two-run home run gave LSU a 3-0 lead.

Other than the delay, the ruling had little effect on the Tigers’ score, as Christian Ibarra belted a single off Chase Wellbrock (5-0) and Alex Bregman drove him home with a double to right field.

The Tigers led 4-0 entering the top of the top of the eighth inning when Houston came to life against the LSU bullpen. After facing the minimum in the seventh by virtue of a double play, LSU reliever Kurt McCune allowed the first four Cougars to reach base, including an interference call against the righthander and three singles – the last of which drove in two runs and cut the lead to 4-2.

LSU’s Zac Person entered to get a groundout that moved runners to second and third with one out. Nate Fury then gave up another two-RBI single to Caleb Barker which tied the score at 4-4. Fury ended the rally with a strikeout and a popout.

In the top of the 11th, Broussard got the first two batters out before Josh Vidales singled off Ibarra’s glove and into left field. Michael Pyeatt followed with a double that put runners at second and third, and set the plate for Survance’s game-winning hit.

LSU was retired on three fly balls in the bottom of the 11th.

LSU starter Kyle Bouman, who didn’t figure into the decision after leaving with a 1-0 lead, pitched six scoreless innings and gave up only two hits with two walks.

The game started 30 minutes late due to a 63 minute lightning delay in the loser’s bracket final on Sunday afternoon.

Houston designated hitter Justin Montemayor was ejected in the top of the fifth inning for arguing a call after it was ruled he was out at first base.

The following is the ruling made by the Baton Rouge Regional Protest Committee, which is made up of NCAA Representatives Gary Overton and Warren Turner along with umpires Joe Burleson (crew chief) and Steve Mattingly (assistant crew chief), on the ball hit by LSU’s Tyler Moore in the seventh inning:

“We had a protest by the Houston coach, who was protesting that the ball was lodged. As a committee we all got together (two NCAA reps and two crew chiefs) and determined that a judgment call was made and the ball was not lodged and remained live and in play.”

Opening Statement
“It was obviously a very tough loss for our guys. It was a heck of a game though. We seemingly had the game in hand, and I felt like we should have been up more than that. We were crushing balls all over. Our guys were swinging the bats well, and attacking their pitcher. Unfortunately, the balls weren’t falling for us. Kade (Scivicque) had the home run and then we had the rally for three more runs. It looked like we had an insurmountable lead. Every ball they hit found a hole. The breaks of baseball were against us tonight. Joe Broussard came in ad pitched his heart out. He competed with every ounce of energy he could. I thought we played great defense, and made some spectacular plays. I still can’t believe the ball that (Alex) Bregman hit didn’t go off the wall. They were playing their outfielders very deep, and they were just making catches. The balls weren’t dropping for us. We are going to regroup and get ready to play tomorrow. We have one game to play tomorrow. We are playing for a championship tomorrow. I know our guys will be ready to go. “

On the pitching…
“(Kyle) Bouman was phenomenal. He threw six shutout innings. We couldn’t ask for anything more from him. Our bullpen has been so fantastic. Kurt McCune pitched an outstanding seventh inning.  They kept finding holes in the eighth inning.  We had a strange play on the interference call. It certainly aided their inning. They did come through with some big innings though. They put the balls on the ground and found some holes.”

On his hitting performance tonight…
“The last hit came up short. That’s what mattered. I will say this. I know Tyler (Moore) and myself will leave every ounce of energy we have on that field tomorrow. We will do everything possible to win that game. We going out there and playing aggressive tomorrow. We will have fun and let it rip.”

On facing adversity throughout the season…
“We have been tested a lot this year, and our confidence has been tested a lot this year. We overcame it, and we are just going to leave everything out there tomorrow. That is all we can do. We will play with a lot of energy and enthusiasm. We are coming out to the field tomorrow like it’s the last day we will ever get to play the game of baseball.”

On tonight’s loss versus Houston…
“We hit a lot of balls right on the nose. They just didn’t find the holes tonight. That’s baseball. We know that, and we know that it comes with playing the game. We are going to come out tomorrow and leave it all out on the field. There is no time to hang our heads right now. We just have to put it behind us and move forward. We already looking forward to tomorrow and playing our hearts out.”

On moving forward from tonight’s loss…
“It is already flushed. We are looking forward to tomorrow. There is no time to hang our heads now. It is win or go home. We are excited to come out tomorrow and play.”

Opening Statement…
“Wow – what a game. You know that was two really good teams getting after each other wire-to-wire. I thought LSU played outstanding. I thought our team just played really, really good. We just didn’t give in. There was a point in that game where we kind of could have tucked our tails a little bit there and shut that thing down. But this time of year, you just have to keep playing. I’ve said that about this team all year that they never quit. They never quit. I don’t know what our record is, but however many games we’ve played there’s never been one time where I felt like this team has shut it down. When you have that characteristic, it can go a long way for you. I really appreciate it as a head coach.”

On the controversial inside the park home run during the 7th inning…
“We felt that it was lodged. We went through the protest process and got denied. Now looking back on that thing, that kind of jumpstarted us a little bit. We come right back and respond after that. It is what it is, and that thing ended up working in our favor.”

On his pitching staff going into tomorrow’s game…
“We still got a lot down there. We have a few guys that can come back. We could throw ‘Johnny Wholestaff’ tomorrow. You know it might be one of those, but we still got some bullets in there. There are some guys that haven’t pitched yet that will get an opportunity. Like I said, we’ve got some guys we can recycle back through.”

On his game tying single…
“When they made the pitching change to the left-handed pitcher (Zac Person), Casey Grayson was up to bat. I knew that he was going to try and get a sacrifice. Grayson really put the ball in play and helped advance the runner. I knew that I had to stay short and compact with my swing. I was able to get down in the zone and send the ball up the middle.”

On the momentum change after this game…
“You get to this time of the year, and these are those games you enjoy playing in. We knew that our season was on the line. We will come out tomorrow and expect a really tough fight with LSU. They are a really great team. I am really excited to be back at it tomorrow.”

On coming in as relief pitcher…
“Tonight, I was expecting anything. We were backed into a corner. We were playing for one game. I was ready for anything. When my number got called, I just tried to go in and do my job. I knew my teammates were going to back me up 100 percent. All I had to do was come in and do my job, which was to throw strikes.”

On the momentum change after this game…
“No game at this time is easy. We knew that both teams wanted it just as bad. We were relentless, and we really want to win this.”

On his game-winning RBI…
“The at-bat before, the pitcher (Joe Broussard) had been working me mainly away. I went with the same approach, which was to hit the ball into the opposite field. I was able to get enough bat on the ball.”