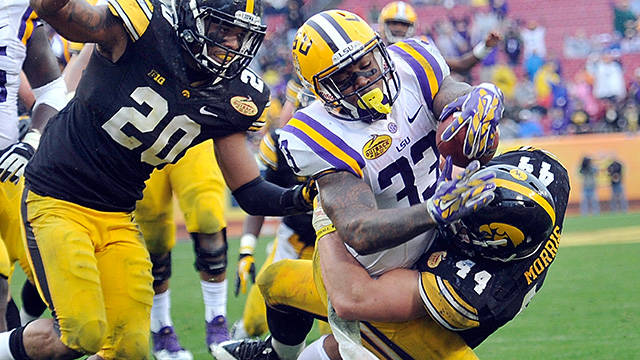 Hill, the game’s Most Valuable Player, ran 28 times for a career-best 216 yards and two touchdowns, becoming the first Tiger to total more than 200 yards rushing since Alley Broussard in 2004. in the process, he moved into second play on LSU’s single-season rushing list with 1,401 yards.

The Tigers built a 14-0 first-half lead and never trailed, though Iowa (8-5) made it interesting with a drive into the LSU redzone and a late 92-yard kickoff return in the final five minutes. However, LSU’s defense capped a terrific performance with an interception to keep the Hawkeyes at bay. Fourteen of LSU’s 21 points came off turnovers.

LSU quarterback Anthony Jennings, who started his first game as a true freshman, managed the game well with the exception of his lone interception that led to Iowa’s first touchdown midway through the third quarter. Otherwise, Jennings completed 7-of-19 passes for 82 yards. The speedy signal caller stayed in the pocket for the most part, running only one time while being sacked four times.

Iowa quarterback Jake Rudock left the game in the third quarter with an injury in the third quarter after completing 9-of-22 passes for 102 yards. He was sacked three times. Redshirt freshman C.J. Beathard entered in relief and finished 4-of-7 passing for 55 yards including a 4-yard touchdown after the long kickoff return with 1:42 remaining.

The Hawkeyes had only 76 net yards rushing on 37 attempts, as Mark Weisman led the way with 37 yards and Jordan Canzeri added 34.

Aside from the kickoff return and the 71-yard interception return, the Hawkeyes were mostly ineffective against the constantly improving LSU defense.

Iowa won the coin toss and deferred its decision until the second half. LSU received the opening kickoff and defended the south endzone in the first quarter.

With the pregame rain subsiding, Jennings didn’t pass the ball once in eight-play, 77-yard drive that ended with his a 3-yard scamper for a touchdown on third down and goal. Hill keyed the drive with a 42-yard run on the first play from scrimmage and LSU led 7-0 with 10:59 remaining in the opening quarter.

Iowa used a late hit personal foul by LSU safety Jalen Mills to gain a first down to its 36 and then a quick tempo to advance to past midfield for the only time in the half. However, LSU safety Craig Loston sacked Rudock on third-and-3 at the 50 and forced a punt that rolled into the LSU endzone.

The teams traded punts on the next five drives, combining for only 37 yards on 21 plays. LSU gained a pair of first downs during the sequence, but sideline interference and holding penalties put the Tigers behind in down and distance.

Starting at its 8, Iowa advanced to midfield with a 22-yard pass from Rudock to tight end C.J. Fiedorowicz and a 15-yard pass to tight end Jake Duzey. After a pair of incomplete passes, Rudock’s third-and-10 throw into the north breeze was picked off by LSU cornerback Tre’Davious White at the LSU 7 to end the threat.

Jenning’s third-down pass on the ensuing drive fell short of Odell Beckham Jr., and Jamie Keehn entered for a 47-yard punt that was muffed by Iowa’s Kevonte Martin-Manley after a fair catch signal. James Wright recovered for LSU at the Iowa 39 to put the Tigers back in business.

A 17-yard catch and run on third-and-13 by LSU running back Alfred Blue and a 4-yard run by Hill on third-and-3 to the 14 kept the drive alive. On the next play, Hill busted the line and dragged a defender into the endzone for a 14-yard touchdown, his 15th of the season.

Neither team earned a first down for the duration of the half, and the Tigers took the lead into the lockerroom.

LSU outgained Iowa in the opening half, 166-73, while holding a 19:07-10:53 advantage in time of possession. The Tigers, who entered the game leading the nation in third down convertion percentage, made 6-of-12 while Iowa managed only 1-of-6.

The Hawkeyes opened the second half with a 12-play, 58-yard drive that took 6:13 off the clock but came away without any points. On a slick field, Rudock completed passes for 23 and 16 yards on third and long to Jacob Hillyer. However, another third-down pass came up short of the first down and Mike Meyer missed a 35-yard field goal.

LSU looked to take advantage of the miss, moving into Iowa territory with a 29-yard pass from Jennings to Beckham Jr. to the Iowa 48. However, on third-and-10, Jennings’ pass sailed over the head of tight end Travis Dickson and into the hands of safety John Lowdermilk, who returned 71 yards and appeared to have scored.

The play was reviewed and it was ruled that Lowdermilk dropped the back just before crossing the goal line. Because no one picked up the loose ball in the endzone, it was replaced inside the 1 yard line for the Hawkeyes. On third-and-goal from the 2, Weisman bullied his way into the endzone, cutting the LSU lead to 14-7 with 5:52 left in the third quarter.

Three-straight punts put the ball back in Iowa’s hands at its 20, as redshirt freshman C.J. Beathard took over for an injured Rudock. The Hawkeyes advanced into LSU territory at the 46, but a fake punt after a timeout came up a yard short of the first down.

LSU took over but an incomplete pass on third-and-5 forced yet another punt.

Iowa made its deepest penetration into LSU territory with an 8-play, 64-yard drive to the LSU 16, but the Tigers stepped up with a fourth-down stop when Loston intercepted Beathard at the LSU 8.

Led by Hill, the Tigers offense turned the turnover into points. A 6-play, 92-yard drive included runs of 28 and 20 yard and was capped by a 37-yard touchdown by Hill that put LSU ahead 21-7 with 2:02 remaining.

Iowa kept the game interesting when Jordan Cotton returned the ensuing kickoff from his goaline 96 yards to the LSU 4. On second-and-goal, Beathard connected with Martin-Manley for a 4-yard touchdown pass with 1:42 to play.

LSU’s Connor Neighbors handled the onside kick and the Tigers ran out the clock with a punt with eight seconds remaining in the half. Iowa’s desperation laterals to end the game were not successful.

LSU will return to Baton Rouge on Thursday afternoon and prepares for National Signing Day on Feb. 5. The Tigers open the 2014 season against Wisconsin at Houston’s Reliant Stadium on Aug. 30.