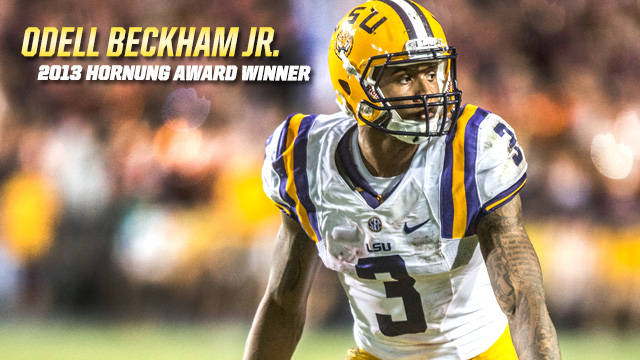 “It’s just an honor and a blessing to even be mentioned with these guys who are up for the Hornung Award,” said Beckham Jr. “I am proud to accept the award and thank the committee for recognizing me and the fans for voting.

“It means a lot to me personally because I have worked extremely hard well before this season started. I had great teammates help me along the way, especially on kickoff and punt returns. None of the opportunities to display my versatility would be possible if it weren’t for my teammates and coaches putting me in a position to succeed.”

In perhaps the most impressive measure of his versatility and team spirit, Beckham played the role of Johnny Manziel on the scout team offense during LSU’s preparation for Texas A&M. The Tiger defense then held Manziel to less than 300 yards total offense and picked off two of his passes as LSU beat the ninth-ranked Aggies 34-10 on Nov. 23.

“I love the way Odell Beckham Jr. plays the game,” Hornung said. “He can run, catch, block and return kicks and plays with great determination. And he has my admiration for lining up on the scout team during the season to help his defense get better. That’s how I played the game – doing anything I could to help my team win.”

Beckham Jr. will be formally presented with the Hornung Award at a banquet at the Galt House Hotel in downtown Louisville on Jan. 28.