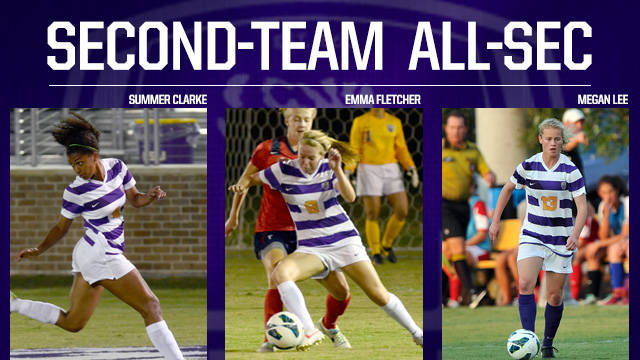 BATON ROUGE – For the first time in the history of the Southeastern Conference, three freshmen from the same school have received All-SEC recognition in the same year as a trio of LSU rookies in striker Summer Clarke, midfielder Emma Fletcher and defender Megan Lee were named Second-Team All-SEC performers on Monday.

In addition to earning Second-Team All-SEC recognition, both Clarke and Fletcher have also been named to the SEC All-Freshman Team for their performance during the 2013 season.

This marks the 10th-straight season in which at least one LSU Tiger has been recognized as an All-SEC performer as nine true freshmen in program history have now earned either a first-team or second-team selection. LSU’s trio join the likes of Ashley Mitnick (1999), Artie Brown (2001), Stephanie Keating (2002), Melissa Clarke (2005), Chelsea Potts (2006) and Jade Kovacevic (2012) as freshmen honorees.

Not before Monday’s announcement has one school placed three freshmen on the All-SEC soccer teams in the same season with two freshmen selections being the previous high for an SEC school.

The Tigers have now earned a total of 19 selections to either the First-Team All-SEC or Second-Team All-SEC in nine seasons under head coach Brian Lee since 2005.

Clarke, Fletcher and Lee helped form the nucleus of LSU’s Class of 2013 that received consensus recognition as one of the Top 15 recruiting classes in the country heading into the 2013 season. Their talent has certainly been on display while leading a youthful Tiger squad into the top half of the SEC table in a tie for sixth place in the final league standings this season.

Clarke has emerged as one of the SEC’s top goal scorers in her debut season at LSU as she is the team’s leading scorer with 10 goals and three assists for 23 points through 19 matches this season. She has scored a total of eight goals in SEC play to tie for the No. 3 spot in the SEC, which includes three multi-goal games with a hat trick at Arkansas on Oct. 4 and two goals each at Alabama on Oct. 6 and Texas A&M on Thursday night.

A native of Richmond, British Columbia, Canada, Clarke was honored as the SEC Offensive Player of the Week and TopDrawerSoccer.com National Player of the Week after scoring five of LSU’s eight goals in a weekend sweep at Arkansas and Alabama in early October, including both game-winners.

Fletcher has enjoyed a record-setting freshman season with the Tigers as one of the SEC’s top attacking midfielders while scoring one goal and serving up a team-leading 12 assists for 14 points on the year.

Fletcher’s 12 assists is a new LSU freshman record, breaking the school’s previous freshman mark of eight assists by now senior Addie Eggleston during her debut season in 2010. Fletcher is the SEC’s top assist maker in 2013 as her 12 assists in all games and eight assists in league play top the SEC scoring charts. She is also tied for the No. 5 spot in the NCAA rankings with 12 assists on the season.

A native of Victoria, British Columbia, Canada, Fletcher earned SEC Freshman of the Week honors in back-to-back weeks while scoring her first career goal in a 1-1 draw with Tennessee on Sept. 27 and assisting a game-winning goal in a 3-2 overtime victory over Mississippi State on Sept. 29 before dishing out four assists in LSU’s weekend sweep at Arkansas and Alabama.

Lee was the beneficiary of Fletcher’s service in a 3-2 overtime win against Mississippi State as she scored the game-winning Golden Goal in the 95th minute for her first career goal as an LSU Tiger.

Lee has proven herself as arguably the most versatile Tiger during the 2013 season while seeing action on each level of the field as a forward, midfielder and defender this fall. Primarily a defender in LSU’s setup, Lee is already one of the SEC’s top left backs while scoring one goal and dishing out three assists for five points on the year.

Unlike Clarke and Fletcher, Lee did not appear in each of LSU’s 11 SEC matches this year as she missed a home match with Georgia on Oct. 25 and a road match at Kentucky on Oct. 27 after being called into international duty with the Football Ferns of the New Zealand Women’s National Team for a two-game series with the world’s No. 1-ranked United States.

A product of Massey, Auckland, New Zealand, Lee took the next step in her footballing career while earning her first international cap at the senior level with the Football Ferns as a late substitution in New Zealand’s 1-1 draw with the United States in their friendly played at Crew Stadium in Columbus, Ohio, on Oct. 30.

Their performance has not been lost on major college soccer publications nationwide as each was recently named among the Top 50 freshmen in the NCAA for the 2013 season by TopDrawerSoccer.com. Clarke earned a No. 11 ranking to lead the way, while Fletcher received a No. 26 ranking and Lee claimed a No. 50 ranking in the TopDrawerSoccer.com Top 100 Freshmen list.

They look to help lead the Tigers into the postseason beginning Monday afternoon at 4 p.m. CT with a first-round match against Auburn in the opening match of the 2013 SEC Women’s Soccer Tournament. It marks the ninth-straight season in which the Orange Beach Sportsplex in Orange Beach, Ala., will play host to the SEC Tournament.