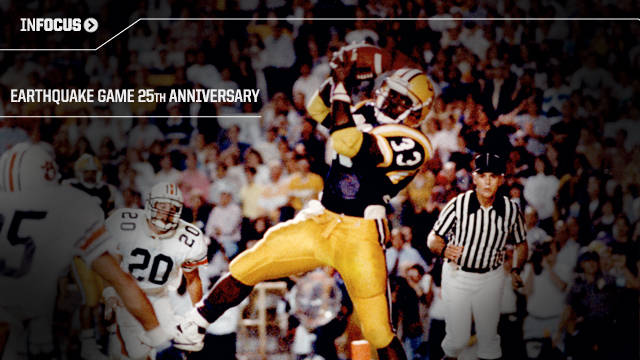 A Saturday night in a crammed Tiger Stadium. A strong defensive game between two rival Southeastern Conference powerhouse football teams, and a scoreless LSU offense trailing Auburn 6-0 with less than two minutes left in the game.

With national rankings at stake and a nationwide audience watching on ESPN, LSU quarterback Tommy Hodson threw an 11-yard game-winning touchdown pass on fourth-and-10 to tailback Eddie Fuller. The eruption from the capacity crowd in Death Valley caused a seismograph at LSU’s Howe-Russell Geoscience Complex, located about 1,000 feet from the stadium, to record an earthquake at the time of the game-winning play.

Today, Hodson and Fuller say that the October 8, 1988, LSU win over fourth-ranked Auburn is still a significant experience and forever a part of their lives. In fact, both agree that the famous play is much bigger nowadays, creating a legendary life of its own permanently engraved in LSU football history.

“The story seems like it’s got legs,” Hodson said. “It happened 25 years ago, but I don’t remember it being that big of a deal a few days after the game. The story has just grown since then, and now, it’s a game everyone talks about. It makes for a good story.”

When Fuller first heard the crowd noise registered on the seismograph, he recalls the news not making much sense at the time because he felt like Tiger Stadium was always that loud.

“It wasn’t until I came back to LSU five years later that I heard the stories about what actually happened that night, and then I realized how much of an impact the play had on LSU athletics,” Fuller said.

These two Tiger teammates have played in some of the closest, toughest and most aggressive games in college football history, with this game at the top of the list. The Earthquake Game is one of those dreamlike moments in LSU history that the famous past players relive every year with fans and the media.

Hodson and Fuller might be the two main names linked with the legendary game, but both men were quick to give credit to the real stars of the game, which they claim is the LSU defense.

“The memory that stands out the most is how good Auburn was on defense, but then how great our defense was holding Auburn’s offense the entire game,” Hodson said. “We wouldn’t have won the game without our defense creating so many opportunities, and it’s great to have been a part of a game like this at LSU.”

Whether watched on ESPN or live in Tiger Stadium, every fan has a certain memory from this game and the earthshaking celebration that followed. Hodson and Fuller each having their own memories and emotions toward the game-winning pass.

“Time stood still,” Fuller said. “I ran the route and I can remember turning around and everything just stopped. I could see Tom, I could see him release the ball, I could see a defensive lineman’s finger tip the ball, and then I waited for so long for the ball to actually get to me. I was in one of those very concentrated moments that even after I caught the ball, I didn’t hear a thing from the crowd, it was so surreal.”

On the other hand, Hodson’s laid-back personality proved how calm the star quarterback was as he passed the ball and watched his team’s final chance to win unfold.

“I remember it being just a normal, average game and once I got into the fourth quarter all my jitters and nerves went away,” Hodson said. “As an athlete, I just kept thinking about the task at hand and remained focused with my team, who knew we had only one more chance to score.”

When asked about their preparation for the celebrated game-winning pass, Hodson and Fuller both said it was a successful play called several times throughout the game. “I threw it many times, and it was actually the play we did on the same series on first down,” Hodson explained. “We came back for fourth down, and since it was our last chance, I called it again and luckily it was successful.”

Following the Earthquake Game, Hodson and Fuller continued to have successful careers at LSU both on and off the field. When discussing their greatest accomplishments as LSU Tigers, the athletes demonstrated how hard work can go a long way.

“I would have to say my greatest accomplishment while at LSU was leaving the school as the leader in the SEC and at LSU in passing yards,” Hodson humbly said. In fact, Hodson still sits atop LSU’s career passing yardage list, and he is the school’s leader in attempts, completions, touchdowns and victories by a starting quarterback.

“My greatest accomplish is graduating with a degree from LSU because I made a promise to my mother that I would graduate college, and that is the one promise I kept,” Fuller said. Following graduation, the Buffalo Bills drafted Fuller, where he competed from 1990-1994 in four straight Super Bowls, and “lost four straight Super Bowls,” Fuller laughed as he talked about his NFL career.

Fuller currently lives in Prairieville, La., working in medical sales. He and his wife Tressa have one daughter, RaeDiance, who is a junior at St. Joseph’s Academy in Baton Rouge.

Hodson graduated from LSU in 1990 and played for the New England Patriots from 1990-1992, the Miami Dolphins in 1993 and the the Dallas Cowboys in 1994 before finishing his NFL career with the New Orleans Saints in 1996.

Today, he lives in Baton Rouge and works for an electrical apparatus sales company. Hodson and his wife, Andy, have twin daughters, Catherine and Christina, who are currently freshmen Chi-Omegas and proud college students, continuing their dad’s legacy at LSU.

Today, Hodson and Fuller are the definition of proud LSU alumni, closely following LSU athletics from the comfort of their homes. But occasionally, the two football legends attend games in Tiger Stadium, instantly feeling grateful for the everlasting memories and for the significant meaning of Death Valley, the place where their dreams came to life and continue to live on forever at LSU.