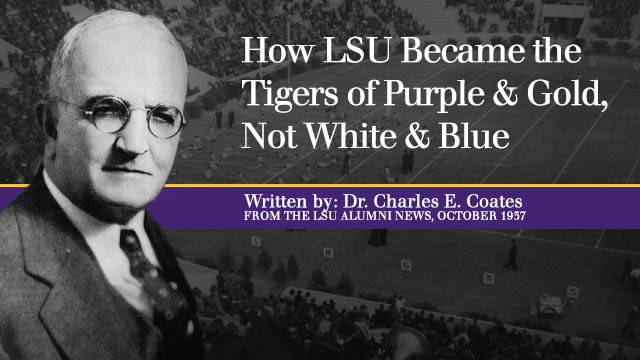 Dr. Coates’ grandson, Charles H. Coates, Jr., of Baton Rouge, forwarded this story to be shared with Tiger fans everywhere. His grandfather served LSU 1893-1939, retiring as Dean of the College of Pure and Applied Science. Coates Hall, located on the quadrangle of the Baton Rouge Campus, bears his name.

How The Tigers Got Their Name

When I first came to the University in 1893, I found to my surprise that there was practically no athletics in the student body: no football, no tennis, and only a very little baseball in the spring. It struck me we ought to have that sort of thing. I had played at Johns Hopkins, where I had received the bachelor’s and the doctor’s degree, though I had never considered myself much of a player. Dr. H.A. Morgan, subsequently president of the University of Tennessee, had played in Canada. Together we undertook to train two teams to play football. We nailed cleats on leather shoes, but we had no uniforms.

Morgan and I did the coaching quite poorly. I taught the boys the Leland flying wedge and the turtle back.

To arouse interest and give the whole thing point, my friend T.L. Bayne of New Orleans, who had been on the Yale team and was known as Nervy Bayne, undertook to get up a team of New Orleans players, composed mostly of ex-college men from Tulane and the Southern Athletic Club.

Our game in New Orleans was made a gala day in the city. As far as I know it was the first game of football played in the city. The game was played some time in November, on November 25, 1893, to be exact.

I knew we had to have some colors so Ruff Pleasant, who was later governor of Louisiana, a couple of other men and I went to Reymond’s store, at that time at the corner of Third and Main streets. We told them we wanted quite a lot of ribbon for colors, but no one knew what our colors were. It happened that the store was stocking ribbon for the coming Carnival season and had a large supply of purple and gold. The green had not yet come in. So we adopted the purple and old gold, bought out the stock, and made it into rosettes and badges. Purple and old gold made a good combination and we have stuck to it ever since. We also had to have college yells so we composed some and adopted others. One of the latter was the frog chorus, popular at Yale. Most of our yells have been superseded by others more modernistic.

When the time came for the game, we went down to the city and met our opponents, most of whom had played football before. They gave us a very good beating, to the intense indignation of many of our local followers. Ruff Pleasant got a small cut on the forehead which bled a little bit and he was borne from the field. Today, of course, he would have been back in five minutes. Fred Lyons, took his place, I believe.

Barring the fact that we were defeated, everybody had a good time and we came home very tired, resolved to do better next year. Morgan and I had also resolved to get a coach for this “next” year, which we did. This was very largely because I had hurt my hand in tackling and had to lay up for a time while Morgan ran down the field, tripped over his sheer ferocity, and sprained his knee. This was the beginning of our football as far as I can remember.

In 1894 we did not play Tulane but we employed A.P. Simmons to coach us. He was a Yale man. I think we paid him $300, which we raised by subscription.

The following year, 1895, we scheduled a game with what was supposed to be the Tulane team, but as there were not enough football men at Tulane they played anybody they could get hold of. We again employed Simmons to coach our team. We won this game.

It was the custom at that time, for some occult reason, to call football teams by the names of vicious animals; the Yale Bulldogs and the Princeton Tigers, for example. This is still the vogue. It struck me that purple and gold looked Tigerish enough and I suggested that we choose “Louisiana Tigers,” all in conference with the boys. The Louisiana Tigers had represented the state in Civil War and had been known for their hard fighting. This name was applied collectively to the New Orleans Zouaves, the Donaldsonville Cannoniers, and to a number of other Louisiana companies sent to Virginia, who seemed to have the faculty of getting into the hardest part of the fighting and staying there, most of them permanently. One company I knew of went in 200 strong; only 28 returned and many of these were wounded.

So “Louisiana Tigers” went into the New Orleans papers and became our permanent possession.

Our team didn’t compare with present-day teams, in skill, ability, or power. But we had a pretty good time and if there was any professionalism involved I never heard of it.

A few years later when Col. David F. Boyd, who had been president of the University from 1865 to 1880 and again from 1884 to 1886, returned to the University, he was rather surprised to find purple and gold as the colors. He told me they were not the colors, that white and blue had been chosen by him many years ago. But purple and gold had by that time established itself and nothing was ever done about it. Colonel “Dave” also liked the name, “Tigers.” I think he was one of them himself during the Civil War.