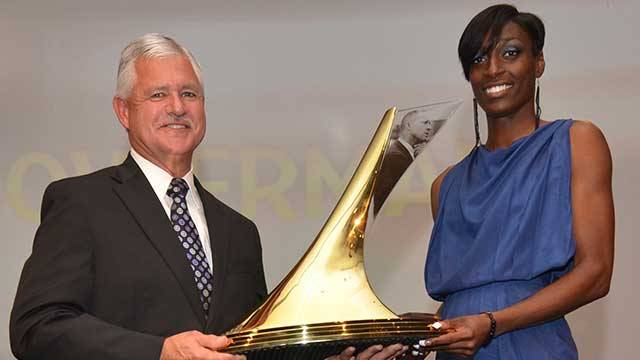 ORLANDO, Fla. – LSU’s Kimberlyn Duncan capped a historical year in 2012 on Wednesday night as she was announced as this year’s women’s recipient of The Bowerman honoring the premier athlete in collegiate track and field in a special award’s ceremony at the JW Marriott Grande Lakes.

Duncan was announced as the women’s recipient of The Bowerman as she was joined by two other finalists in Arizona high jumper Brigetta Barrett and Oregon heptathlete Brianne Theisen. She makes history as the first SEC athlete to win The Bowerman since its inception.

Distance runner Cam Levins of Southern Utah was honored as the men’s recipient of The Bowerman this season as a highlight of the 2012 U.S. Track & Field and Cross Country Coaches Association National Convention being held this week in Orlando, Fla. Levins was joined by Florida sprinter Tony McQuay and Illinois sprinter and hurdler Andrew Riley as this year’s men’s finalists.

This marked the second year in a row in which Duncan has been honored as a finalist for collegiate track and field’s highest individual honor as she is the only two-time finalist in the history of the award.

Now in its fourth year, The Bowerman is collegiate track and field’s equivalent to the Heisman Trophy and is presented annually by the USTFCCCA to the nation’s premier male and female athlete at the collegiate level each season. This year’s finalists were announced by the USTFCCCA on June 29.

“I’m in total shock right now, I don’t even know what to say,” Duncan said following the announcement. “When I heard them call my name, I had to take a moment just to make sure I heard them right. It’s so surreal. To know that those voting for this award see me as the best athlete at this level is very humbling to me. We have some amazing athletes from some great programs here tonight. Any one of them is deserving of this award. Of course, I’m very excited to win it this year while representing my school and my team at LSU.

“I’m fortunate to train with my great coaches and teammates that really push me every single day to improve myself. I think this is just a result of their impact on my life and how they push me each and every day. And I know I wouldn’t be where I am today without my family. They’ve supported me and helped me to get where I am today. I’m blessed to have them in my life. This only pushes me and motivates me to reach my full potential in this sport. I’m very honored to receive this award, and will work even harder to defend it in my senior year.”

Duncan cemented her legacy as one of the NCAA’s all-time greats while leading the Lady Tigers as a junior during the 2012 season.

Duncan defended her NCAA Indoor and NCAA Outdoor championships in the 200-meter dash, becoming the first sprinter in collegiate history to sweep national titles in the event in back-to-back seasons with her performance. She smashed her own low-altitude collegiate record with a personal record of 22.19 seconds set in the semifinals at the NCAA Outdoor Championships.

Duncan also earned a reputation as one of the world’s emerging stars in the 100-meter dash when she became just the fifth collegiate sprinter all-time to break 11 seconds in the event when she set the SEC Championships meet record with a run of 10.96 in the conference final to win her first career SEC title in the event.

The two-time NCAA 100-meter silver medalist is now the No. 3-ranked sprinter in collegiate history in both the 100 meters and 200 meters.

A native of Katy, Texas, Duncan has captured five NCAA championships, seven SEC championships and nine All-America honors as one of the most decorated sprinters in school history.

Duncan follows in the footsteps of Colorado’s Jenny Barringer (2009), Virginia Tech’s Queen Harrison (2010) and Texas A&M’s Jessica Beard (2011) as the women who have claimed The Bowerman trophy since the award’s inception. Levins follows the likes of Oregon’s Galen Rupp (2009) and Ashton Eaton (2010) and Florida State’s Ngoni Makusha (2011).

ESPN SportsCenter anchor and host of ABC’s Wipeout John Anderson served as the Master of Ceremonies for The Bowerman Ceremony and USTFCCCA Hall of Fame Ceremony on Wednesday night. Anderson is a 1987 graduate of the University of Missouri School of Journalism and a four-year member of Missouri’s track and field team during his collegiate career. Anderson also hosted the ceremony following the 2010 season in its second year of existence.