Lunch With Les presented by Subway (2012) 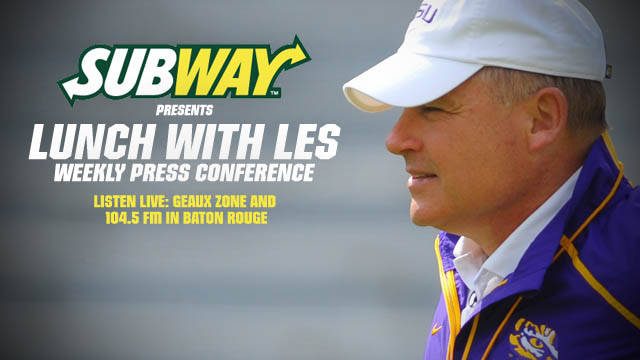 Fans are invited to join LSU head coach Les Miles along with “The Voice of the Tigers” Jim Hawthorne and Charles Hanagriff on Mondays prior to football games for “Lunch with Les” presented by Subway.

Audio of the show along with coach Miles’ weekly press conference will be aired from 12:10 – 1 p.m. CT on 104.5 FM in the Baton Rouge area and free in the Geaux Zone on www.LSUsports.net. The show is also available on select LSU Sports Radio Network affiliates.

Live video of “Lunch with Les” will also be available to members of the Geaux Zone. Click here to view membership packages.

The 45-minute show will include coach Miles’ entire 30-minute press conference live from the fifth floor of the LSU Athletics Administration Building, as well as commentary from Hawthorne and LSU Sports Radio Network personality Charles Hanagriff.